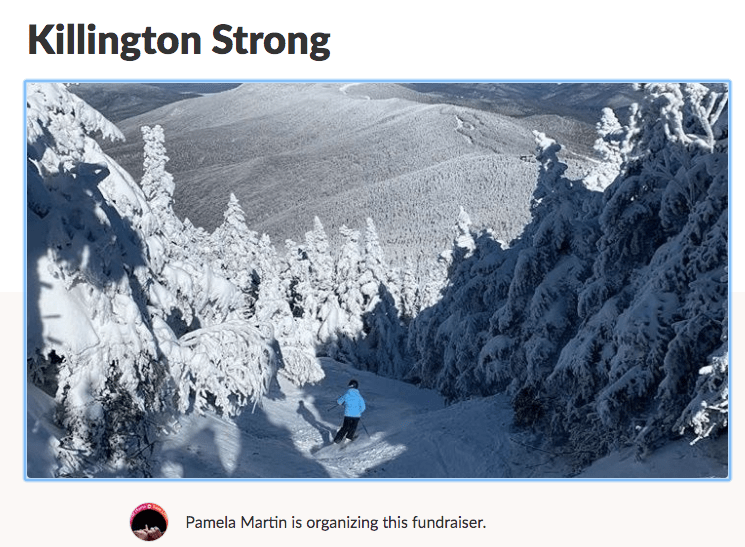 As soon as area businesses were shut down due to coronavirus concerns, Pamela Martin started asking the community for help.

Martin, who moved to Killington from New York three years ago, started a GoFundMe, called Killington Strong, to help businesses that closed and laid off service workers.

Martin said she was inspired after she saw Killington Resort giving two tractor trailers full of food on March 17 and 18 to employees who had been laid off.

“In my mind’s eye, I can still see the picture of [resort president] Mike Solimano, surgical mask over his face, standing outside on a raw day handing out that food,” Martin said. “That provided the basis of my idea and it definitely helped inspire me.”

Martin said people from all over the valley and those who don’t live in the community but consider Killington home have donated.

People from several organizations, including the Killington Pico Area Association, Killington Rotary Club, Sherburne Memorial Library and Church of Our Saviour at Mission Farm met on a conference call on Monday to come up with a distribution plan for the funds.

Mike Coppinger, who is president of the KPAA and the rotary club, said the group decided to give the funds to the Rotary Club to later distribute.

Coppinger estimated more than 400 people in the area have been laid off from work. “This whole pandemic has totally changed the landscape,” Coppinger said.

He said people who were never food insecure in the past are now.  Coppinger said many people have come to him looking for ways to help.

“What Pam has done is remarkable in, honestly, a very short amount of time,” he said.

Nate Freund, the owner of Sushi Yoshi, immediately got involved in the GoFundMe.

“We’re going to use it for a few different things—one will be a social media contest to win gift cards to local businesses,” Freund said.

Part of the money will also go to local food shelves so service workers can get meals. Freund said the details of the plans were still being worked out.

“It’s going to help people in the community who got laid off get a meal,” Freund said.

Freund, who has three restaurant locations in Killington, Stowe and New York, said he’s been taking 5-20 take-out orders a day in Killington, but that number of take out-orders doesn’t come close to matching his expenses. He said he’s lost about 90% of the business he would usually see this time of year, but his expenses haven’t changed.

It’s unclear when businesses will be able to reopen again. On Sunday, March 29, President Donald Trump extended social distancing guidelines, limiting groups to 10 people through the end of April and said the guidelines could be extended further through the end of May. Vermont Governor Phil Scott ordered all non-essential businesses in Vermont to close and everyone was ordered to “stay home, stay safe,” on March 25 until at least April 15. A similar order is in effect in New Hampshire until May 4.

Martin said all the money donated through the GoFundMe will stay within the Killington community. gofundme.com/f/killington-strong