The Vermont ski industry lost a dedicated ski pioneer and teacher with the passing of George William “Bill” Jenkins, Jr., on May 25, 2015, at age 90.

He was laid to rest with military honors June 3 at the Vermont Veterans’ Cemetery in Randolph Center with family and friends gathering afterward to celebrate his life at Rutland’s Southside Steakhouse.

Jenkins was an important contributor to the growth of the sport by building the Green Mountain College ski hill and teaching thousands of young women to ski at a time when skiing was still largely “a man’s sport.”

He also invented and patented a surface ski lift, among other inventions, helped found another ski area, and managed two others.

A life well lived in sport

Bill Jenkins was born on August 1, 1924, in Keene, N.H., and began school in his father’s home town of Bellows Falls, graduating from Bellows Falls High in 1941. While there, he had learned to ski and became a ski jumper. He had learned to ski by watching and then getting lessons from Jack Durrance, brother of the famous Alpine racer Dick Durrance.

While serving in the U.S. Army during World War II—he was a Technician Fifth Grade grinding lenses and a Rifle Marksman—Jenkins also taught skiing to soldiers on leave. When he returned to Vermont, he attended and graduated from Rutland Junior College.

He began his career in the ski industry by starting the ski program at Green Mountain College (GMC) in 1948. At first he took his students to a nearby New York farm, where he installed a rope tow. But finding the trip time consuming, he created a campus ski hill by excavating a field out behind the school.

In 1951 he built the school’s ski hill. He had three 300-foot long runs with a 31-foot vertical and three tows, so three classes could be taught at the same time; each hill was a little more difficult so students could advance.

In 1943 Green Mountain had become a women’s junior college (returning to coeducational in 1974) so Jenkins was truly avant-garde, as women were seldom encouraged to engage in difficult sports at this time and with the old wood skis of the day, learning to ski was anything but easy!

During the 30 years he taught there (the hill closed in 1979), “Almost every single girl learned to ski as part of their physical education program,” recalled Marilyn Sheldon, a former GMC physical education instructor. “He was a wonderful teacher and also coached the ski team,” she noted.

Sheldon also recalled his using roller skis to teach his students on a mat before snow fell and said he was “very dedicated to teaching” and using movement to get his students initiated into sliding on snow.

While operating GMC ski hill, Jenkins also rigged up some lights and offered night skiing and opened the area to the public. He installed snowmaking using a Larchmont snowgun in the early 1950s, which, most likely, was the first use of snowmaking in Vermont!

Jenkins had married Nancy Phelps, one of his students, on May 13, 1950, and while he and his friend Stan Whitney ran the ski school at the new High Pond Ski Area in Brandon on weekends, their wives ran the restaurant in the High Pond Inn.

Nancy went to work at Pico for area co-founder Janet Mead, eventually becoming the ski shop manager before retiring in 1989. A skiing family, the Jenkins children Deb, Betsey and Christopher learned to ski and all three became ski instructors at Pico. Deb continues to teach at Smugglers Notch and Betsey at Vail. Jenkins enjoyed having a skiing family and also taught adaptive skiing at Pico in his 80s!

An entrepreneur and inventor at heart, Jenkins also co-founded Bird’s Eye Mountain Ski Area in Castleton in 1962, installing his invention the Stabil Disc, a non-detachable cable lift, which he also sold to another ski area. He left Bird’s Eye over differences regarding snowmaking which he thought essential.

He was particularly proud of his ski-simulator machine, which he believed could be used to help beginners learn the sport.

Another invention allowed one to convert human energy to electricity by either hand-turning a crank or using a ski motion. He noted it could be used in places like African villages that lacked electric power. Just recently Green Mountain Power inquired about this device.

He also served as a general manager of the former Round Top Ski Area in Plymouth and sold big rubber-tired tractors (for grooming) to ski areas for the White Tractor Company during his long ski career.

Jenkins contributed to skiing not just through his teaching and operating areas but also through helping to preserve Vermont ski history by giving photographs and information to the New England Lost Ski Areas Project (www.NELSAP.org). NELSAP founder Jeremy Davis commented, “He was a great man, and I really enjoyed talking to him about ski history in the Rutland area. The history of a lot of areas would be lost if Bill hadn’t shared his memories.” 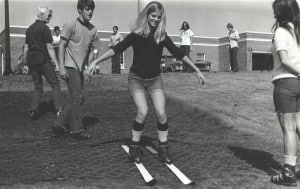 Jenkins also enjoyed family travel and ski trips to Colorado and Utah (often checking out the lifts). In a 2012 interview, he recounted that one of his glorious mountain moments occurred at Aspen when a ski patrolman invited him to take a run after the lifts closed. “We skied down Ruthie’s Run—just the two of us, and it had just been groomed.”

An athlete all his life

Jenkins was still playing tennis three times a week with the Senior Moments group before a slip on the ice in March landed him in the hospital and eventually The Pines, where he and Nancy celebrated their 65th anniversary before his passing.

In addition to wife Nancy, Jenkins is survived by his daughters Deborah Fennell of Jeffersonville, Vt., and Betsey Kiehl and her husband, Jeffrey “Woody” Kiehl, of Vail, Colo., as well as grandchildren Jessica Fennell of South Burlington and Lindsey Kiehl of Vail.

He was predeceased by his son Christopher William Jenkins in 2011.