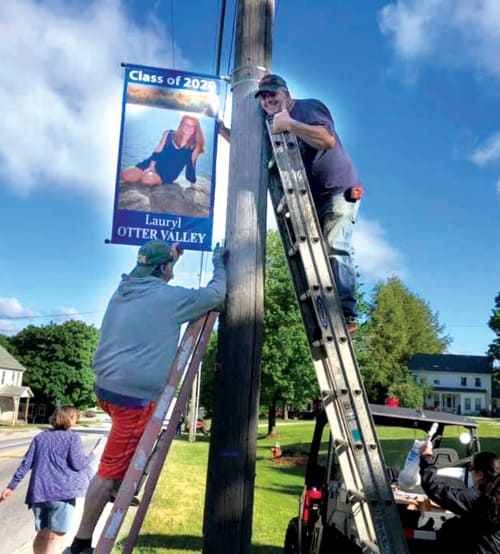 By Lola Duffort/VTDigger and Polly Mikula

The coronavirus pandemic has transformed nearly every aspect of the American education system. And high school graduations, a hallmark springtime rite of passage, will be no exception.

Many of the touchstones of such ceremonies — large crowds, a handshake from the principal — are forbidden by public health directives. So schools are getting creative, hosting drive-in ceremonies, abbreviated graduations for individual students, or all-virtual events.

In updated guidance released last week, the Agency of Education gave the thumbs-up to drive-in graduations, as long as vehicles are spaced 6 feet apart, families remain in their cars, and staff conducting the ceremony be kept to a minimum and maintain a safe distance.

Graduates can walk across a stage – one by one – to receive their diplomas, according to state officials. But students should wear masks, their diplomas must be in bags, and all physical contact, including handshakes and hugs, are strictly prohibited.

Schools are also allowed to hold in-person events if they’re limited to 10 people or fewer, although the maximum number of people allowed could go up as the state slowly reopens.

The 16 graduates at Proctor High School held a drive-in graduation on June 4 with vehicles parading through downtown to the high school where a stage was set up near the baseball field. Principal Christopher Sell was on the stage but didn’t hand the diplomas to students as a further safety measure. The valedictorian and salutatorian each gave a speech from the stage.

West Rutland High School’s 17 graduates were honored at a drive-in ceremony on June 5. WRHS also held, complete with music and a guest speaker. Each family was be allowed three cars and a parade through town followed.

Mount St. Joseph Academy took a different route opting to focus on producing a graduation video. On June 5, the day the graduation was originally scheduled, the celebration began, Elgar’s “Pomp and Circumstance” march was played, all steamed on PegTV. The video included all the traditional elements, but each was filmed separately then compiled.

Killington Mountain School held a virtual graduation for its nine graduates on June 6 at 3 p.m. Outgoing Head of School Tao Smith began with a live virtual tour of the school to remind the residents who had vacated the building upon its closure in March what a graduation would have been like. Live speeches and awards followed. A surprise (pre-recorded) video of U.S. Alpine superstar Mikaela Shiffrin sending the KMS graduates off on their respective journey was a highlight of the event.

Mill River Union High School followed that format, too, doing the graduation completely online. Speeches were prerecorded and graduates recorded themselves in their caps and gowns flipping the tassels. The video will be posted to the school’s social media pages on June 10 and aired on PegTV between 5 p.m. and 6 p.m.

In Rutland, about 190 seniors will graduate from Rutland High School on June 11. Groups will come to the high school by appointment and one by one drive from the student lot to the front circle. Each graduate will exit the car, towards the front of the school building and receive their diploma. Family must stay in the car. “There will be plenty of opportunities to take pictures and there will be a professional photographer on hand to take a 5×7 that will be sent to [each graduate,]” the school stated. Students are required to wear masks but are permitted to take it off for pictures.

Other traditional elements of the graduation, such as speeches, will be recorded in advance. A video with messages from individual teachers is also planned for the event. And like other schools, seniors to send in a picture of themselves in their cap and gown, which will be incorporated into a slideshow.

Woodstock Union High School will host a drive-in graduation on June 12 at  5:30 p.m.  Graduates walk to the stage receive their diplomas and get their photo taken. After the ceremony there will be a car parade through town. Friends and community members are encouraged to come out to watch on The Green where posters of each graduate are displayed around the perimeter fencing.

Fair Haven Union High School opted for a similar graduation style. This Friday, June 12 at 4 p.m. it too will send off its seniors with a drive-in ceremony. The senior class voted on various graduation formats and chose this one.

One car per graduate will park in a designated spot and view a prerecorded set of speeches on a mobile device in their car. Then, each graduate’s name will be called and donning a cap, gown and face mask, they will proceed to the stage to receive their diploma (in a bag).

Poultney High School will also host a drive-in graduation for its almost 30 graduates, June 12. Participants will start at the high school and parade down Main Street through town to the elementary school.

At Otter Valley Union High families of the 65 graduates will drive in to the junior varsity football field, where a small number of school officials will stand on a stage for individual diploma handoffs on June 13.

Rutland Northeast Supervisory Union superintendent Jeanné Collins said a student survey made it clear graduating seniors wanted to come together as much as possible.

“They’re still segregated into cars. So there will be some disappointment that it can’t be more in person,” Collins said. “And that’s a fact. But it’s more creative than where we started.”

At Randolph Union High, principal Elijah Hawkes said a staff, faculty and student committee charged with planning the event considered bringing the ceremony to every graduate’s home using flat-bed trailers to truck a stage around Orange County. When the logistics involved proved prohibitive, the committee ultimately opted on a drive-in ceremony in the Vermont Technical College parking lot.

Sarah Garvin, Randolph’s senior class president, who helped plan the event, said many of her peers had hoped to preserve some of the traditional trappings of a graduation – walking across a stage, primarily, and wearing a cap and gown.

“I know a lot of fellow seniors were giving up on the idea that they would be able to walk this year. Or for their graduation in general, so I know a lot of them are feeling blessed and very thankful,” she said.

Many of these set-ups mirror drive-in movie theaters of yesteryear, when moviegoers could tune in to the show using their window speakers. While not ideal or traditional these days, many were successful in replicating at least part of the experience. In any case, this year’s graduation celebrations won’t soon be forgotten.