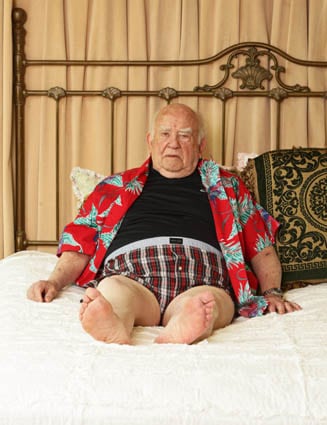 “A Man and His Prostate” was created and written by award-winning screenwriter and producer Ed Weinberger and is based on a true-life experience. While vacationing in Italy, Weinberger collapsed and upon waking up found himself in an Italian hospital, with an enlarged prostate. Hilarity ensues as Weinberger was rushed into prostate cancer surgery. Asner describes the play as “the male response to ‘The Vagina Monologues”’ (Chicago Tribune). But the show isn’t just a play, but an info-comedy about prostate cancer. According to the Center for Disease Control, prostate is one of the leading causes of cancer death among men.

Critics have referred to the play as a “hilarious and informative” evening of entertainment.

Barbara Hoffman of the New York Post said, “This just isn’t a play, but a public service in a comedy format — which is damn funny.”

Tickets are on sale now at pentanglearts.org. Woodstock Town Hall Theatre is located at 31 the Green, Woodstock.

Photo courtesy of Pentangle Arts
Ed Asner is in his shorts in a hospital room, setting the scene for his comedy show “A Man and His Prostate.”