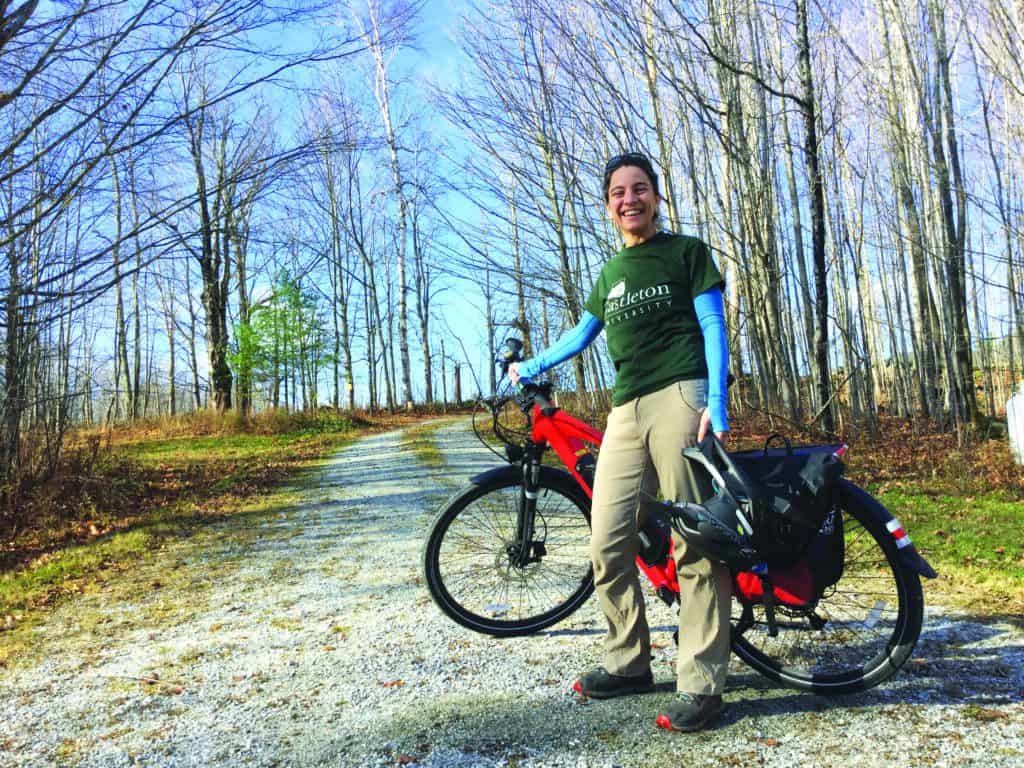 You wake up to the sound of an alarm. It’s early. You don’t want to go to work, you’re tired, yet you muster up the energy to roll out of bed, get ready, and drive to work.

The commute may be a challenge. There’s traffic, you’re still exhausted, and the car ride is just boring.

Palmer rides her electric bike to and from work, a round-trip of 56 miles.

Palmer is one of the many people who have jumped on the electric bike trend, and she’s loving every second of it.

“The biking has been going awesome, it’s become a habit. I actually feel like I’m cheating when I bike to work, I feel like I’m playing hooky, spending an hour on a joyride ” she said.

The trip is not short, and it would not be possible with a regular bike. Palmer lives in East Wallingford, not far from White Rocks Cliff Trail and Okemo Mountain. The trip to Castleton University would normally take 35-40 minutes in a car.

Yet the electric bike makes it possible and enjoyable, unless it’s raining or snowing.

“The e-bike is awesome because it suddenly makes it possible to cover distances that you couldn’t do before, and you can ride to work reasonably clean,” she said.

But making the trip to work on a bike, and doing so enjoyably, is not the only reason Palmer hopped on the electric bike. She’s also doing it for the environment, as the electric bike is much more sustainable than any car.

Electric bikes take no gas, plug into a normal outlet, and cost a lot less to produce than the smallest car. According to Palmer, it only takes about 15 cents of electricity to charge the bike for a 50-60-mile trip.

Palmer, who is pro-environment, loves that aspect of her electric bike.

“This is, for me, a no-brainer. There are no emissions, there’s no gas that goes into it, it’s a win all the way around,” she said.

The electric bike works in multiple ways, usually depending on which bike you buy. Some have the typical throttle that powers the motor, but the one Palmer has is different. Her bike’s motor is powered by sensing pedal movement. The pedal-assist electric bike still requires you to pedal, keeping the exercise yet making it significantly easier. And some can be used on both roads and trails.

According to Palmer, electric bikes were not easy to find just a couple years ago. Yet they have begun to pop up all over.

“They’re definitely on the rise quite a bit,” Johnson said. “I got into [selling electric bikes] because I just think they fit another niche of transportation … They’re going to reach a group of people that will do something that they’re not going to do on a regular bike.”

The important thing that Johnson wants people to know about these bikes is that you do still get physical exercise from them with the pedal-assist technology. It is not just sitting on a motorized vehicle.

“I think what’s important is that it’s getting people onto bikes who normally just wouldn’t ride at all, so those people are actually getting more exercise than if they were driving a car.”

“For many, people who would not normally be able to get on a bicycle due to whatever, injury, fitness, etc., that’s one aspect of it,” he said.

According to Accurso, Alpine Bike Works has been selling more electric bikes to people who are older or have had injuries.

He also mentioned why some segments of the bike market would join in on the electric bike phenomena.

“There’s also the other segment of the population, which is the ‘enthusiasts’ market, and those enthusiasts also enjoy it for various reasons, such as they can go longer,” Accurso said.

He even sold an electric bike to a cycling coach who wanted to keep up with his fastest cyclists. The bike, with pedal-assist, allowed him to do so.

According to Elles, sales at his shop have “probably more than doubled” over the past couple years.

For him, the best perk of the electric bike is being able to pace with people who are more experienced cyclists. He noticed this on a bicycle ride with his girlfriend and a few of her friends.

“We were able to ride at the same pace and go on a ride that was probably four times longer than we would ever have gone on a regular bicycle,” Elles said. “We were laughing and getting hot and sweaty and having a great time.”

He also said that it allows people to take more challenging and longer routes than they could on a regular bike.

Although the usage and popularity of electric bikes have taken off of late, there are still a couple of things that could be improved. Elles hopes that Vermont will allow the use of electric bikes on more state trails.

“Some of the trail systems don’t allow e-mountain-bikes, and I’m definitely an advocate for allowing these pedal-assist mountain bikes on our local trail networks,” Elles said. He mentioned that some people are avid mountain bikers, yet injury or fitness level prevents them from biking on the trails.

Palmer suggested that the state of Vermont should also add bike lanes to roads.

“The shoulder’s huge, but it is filled with gravel and hunks of grass and potholes,” she said. “Having bike lanes would suddenly allow people to afford a bike that can get them there on time.”

With a few changes, the electric bike phenomena could continue to grow.

“It’s bringing a wider range of cyclists together,” Elles said.

For Palmer, it’s even more.

“You’ll save money, you’ll be healthier for it, you get to steal back your commute and have a great time, and you’re helping the environment as a bonus item, that doesn’t even have to be your motivation,” she said.

Brendan Crowley is a student at Castleton University.