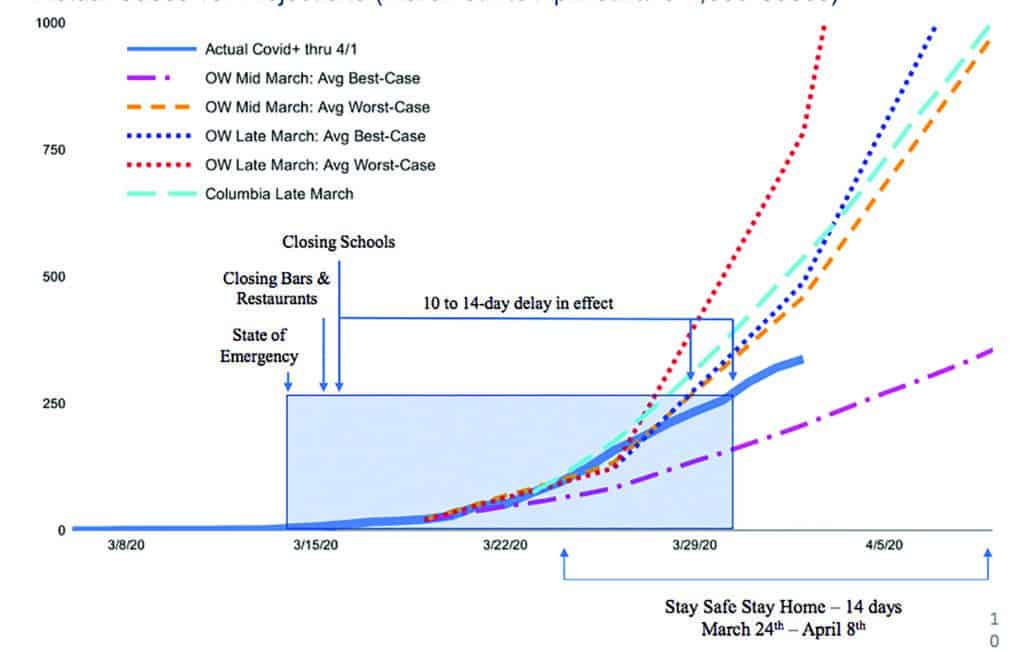 By Polly Mikula and Erin Petenko/VTDigger

The latest update to the state’s model of Covid-19 cases shows that the rate of new cases  continues to decline.

At a press conference Friday, April 10, Michael Pieciak, commissioner of the Department of Financial Regulation, said the slowdown indicates Vermont will most likely have enough hospital beds, intensive care beds and ventilators to meet its needs.

These projections are lower than last week, Pieciak said, but the numbers also highlight the “limited margin of errors that exist, which means we need to double down on our social distancing efforts.”

The assumptions underlying the data and, thus the projections, change regularly, so the team is continually refining the projections with new/better data, he added.
“The glimmer of hope from last week shines a little brighter this week,” he said of the positive trajectory.

While the case rate could mean a “milder experience” in the coming weeks, Pieciak warned that the future is not guaranteed. He said the slowdown was the result of Gov. Phil Scott’s decision to issue a stay-at-home order on March 13. The extension of that order, announced Friday, until May 15 is of paramount importance, he continued.

“Future is not guaranteed,” Pieciak said. “The goveror’s action today are completely necessary to ensure we continue on this positive trajectory. Trends can turn on a dime if we stop and relent on social, personal, and professional sacrifices that everyone is making in their daily lives. Again, our individual actions will ultimately determine our collective experience.”

The state still predicts a peak in cases in two to four weeks, he said, with an estimated 1,000 to 5,000 Vermonters being diagnosed with the virus by the end of May. Vermont is now predicting it will see less than 100 deaths as a result of the virus — at least during this wave. As of  Tuesday, April 14, 29  people had died.

The percent of newly confirmed Covid-19 cases compared to all cases has gone from 15% last week to 9% this week, Pieciak said.

Researchers have used that metric to determine how fast Covid-19 is spreading in the community. Pieciak said the doubling rate is also declining, going from 3 days in mid-March to 7.5 days (though it should be noted that smaller numbers should be expected to double faster).

At last week’s press conference, Pieciak said the state was doing a good job of testing Vermonters for Covid-19 compared to other states. He did not provide data on Covid-19 testing for the latest model. But according to The Covid Tracking Project, an organization that tracks different state data, Vermont is currently fourth in the nation in tests conducted per capita.