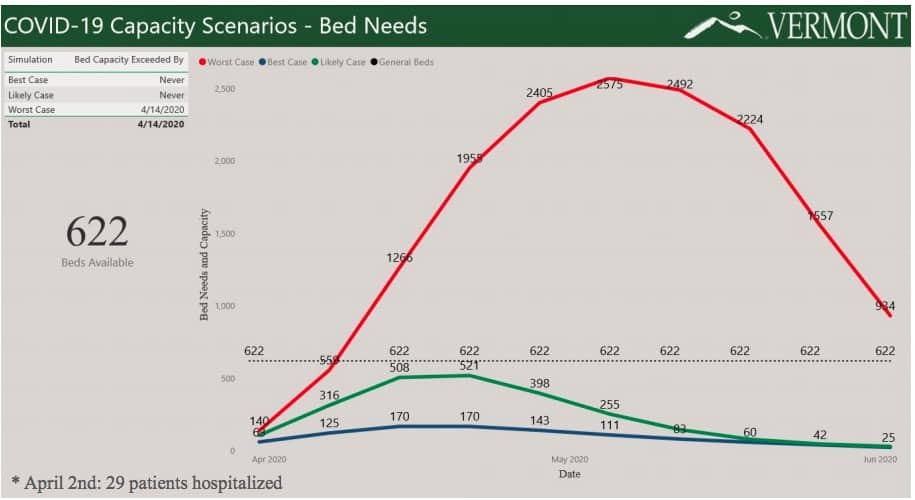 The state identified 70 new coronavirus positive cases Saturday, April 4 — the largest increase of any single day so far. The next day brought 52 more. The state has double its confirmed cases in just a week, 280 new cases in seven days for a total of 575 confirmed cases as of Tuesday, April 7.

Ben Truman, of the Vermont Department of Health attributed the sharp increase to the expanded testing efforts at facilities where the virus had been detected.

“There was a large increase in the number of tests conducted as part of our outbreak response efforts for these facilities,” he said.

As of Tuesday, the state reported that 7,129 tests had been conducted, an increase of 2,690 since Friday, April 3.

Vermont could see up to 100 total coronavirus deaths, Health Commissioner Mark Levine said Monday, April 6, during a press conference, but a more hopeful projection is closer to 44 total deaths, he said.

As of Tuesday, April 7, 23 people have now died in Vermont from the virus.

“We must be prepared for things to get worse before they get better,” Gov. Phil Scott said at the start of a press briefing.

The state’s projections are based on modeling that was released last week. Levine said research also shows that Vermont’s mitigation efforts could end up saving some 1,700 lives that would have been lost if no action had been taken.

Under the best case scenario, Vermont would top out at 3,800 cases; in the most likely scenario, there would be 9,200 cases; and more than 63,000 cases under the worst case model.

At Monday’s press conference, Pieciak said current data suggests the state is still tracking toward the best case model, although the data is still preliminary and they expect the numbers to continue to rise in the coming days and weeks until the state hits its peak.

Preparing for the peak

The Scott administration on Monday, April 6, outlined its efforts to prepare for the peak of coronavirus cases, which is expected to come in the next two or three weeks.

Levine said that anyone who has symptoms of the coronavirus is now eligible for testing, a change from last week, when most people still needed to show severe symptoms to be tested. People still must coordinate testing with their physicians.

The health commissioner noted that about 10% to 12% of tests in Vermont are coming out positive, well below the 30% to 40% rate in some of the coronavirus hotspots. The rate of positivity could indicate that Vermont is also testing at a higher frequency per population than other state, which are still be restricting tests to those with the most severe symptoms or vulnerable.

Levine said the peak in cases may come as soon as this week, based on optimistic modeling, or closer to the end of the month, based on other models.

The state’s data shows that Vermont is in the middle of the pack in New England in terms of how quickly the virus is spreading.

Tracking the trends “shows that the social distancing mitigation strategies are working here,” Levine said. “And we know that that’s incredibly difficult and challenging for everyone to adhere to. But I do need you to understand that the sacrifices you’re making are actually helping.”

Commissioner Pieciak said that while the spread of the disease did seem to be slowing — even beating the “likely” scenario — it was time to “double down” on social distancing measures, not back off them.

“We’re not out of the woods yet, the worst is ahead of us,” he said. “So we really need people to be vigilant and to carry through with the social distancing that have shown some early glimmers of hope.”

Pieciak said the situation is very fluid and the projections the state has developed are evolving and change “quite rapidly.”

That decline in the rate of case growth has only occurred in the past week, as a result of intensive social distancing policies instituted by the Scott administration, including a stay home mandate for everyone but personnel in essential businesses, a prohibition on gatherings, the closing of the state’s public schools and mandatory telecommuting for state workers.

Pieciak credits the slowing of the disease growth to the sacrifices Vermonters are making “personally and professionally and socially” by socially distancing themselves from their neighbors, friends and families.

It takes a period of 10 to 14 days of social distancing to be measurable and “fully effective,” he said.

Those sacrifices will need to continue for weeks to come, Pieciak said, in order for the state to continue to see incremental progress and avoid a situation in which the health system could be overwhelmed, resulting in an accelerating mortality rate.

Preparing for the worst

The peak could extend over a two to three week period, according to Mike Smith, the secretary of the Agency of Human Services.

The Scott administration is using worst case scenarios because the pandemic is an unprecedented event, he said, “and if you look at history … you will find that where there have been failures in major events like this, they did not plan for the worst case scenario.”

Smith said the governor’s mitigation strategies are “critical” to preventing the worst case scenario. “I can’t emphasize this enough,” he said. “They are critical to help us prevent overwhelming, our health care system.”

“Lives are at stake,” Smith said if  Vermonters don’t continue to adhere to the social distancing policies, hospitals will not have enough medical personal and equipment to treat COVID-19 patients.

The Scott administration is using the projections as a way to determine how many hospital resources would be needed — including ICU beds, ventilators and personal protective equipment.

“This is a very complex medical emergency where some patients will need days of care, including in the ICU and ventilators,” Smith said. “The hospitals are our front line of defense, and the state is working hand in hand with our hospitals and our health care system to support them in adding capacity.”

The state is currently setting up more than 800 beds in gymnasiums, auditoriums, fairgrounds and medical trailers in locations across the state. COVID-19 patients will be treated in hospitals, while non-COVID patients will receive care in the “surge” capacity facilities.

While the state will have just enough hospitalization capacity in the “likely” scenario, the conversion of dozens of regular hospital beds into intensive care units will be necessary.

Ventilators, which are a matter of life and death for seriously ill COVID-19 patients, could still be in short supply, however, given the variable amount of time — from days to three weeks — each patient could be expected to need the devices.

The state has four refrigerated trucks on hand in the event there is a large number of deaths as a result of COVID-19.

Colin Meyn, Erin Petenko and Anne Gallavan from VTDigger contributed to this report.