CHITTENDEN—Jenna Baird and Jacob Powsner live in a modest house on land belonging to Baird’s parents, steps away from the large, traditional farmhouse where Bonnie and Bob Baird live. It’s a common arrangement among working farm families that have been on the same piece of land for generations.

The Baird Farm will mark its centennial year in May, and “sugaring” is what the family does.

Said Bob Baird, who was also recently reelected as town moderator for Chittenden, “My grandparents bought this farm in May.” They were Ralph and Sarah, both born on farms “up the road,” which nowadays peters out against the Green Mountain National Forest. The couple bought this farm from Sarah’s sister.

Bob Baird thinks the Bairds have been in North Chittenden for “a couple hundred years. There were a lot of them, a long time ago – more than now, that’s for sure.”

“There’s been a sugarhouse on this property for a long, long time before Sarah and Ralph came,” he continued. “They made syrup here, my father Richard also did, then after I got out of college and came back I built a sugarhouse up in the woods.”

Baird and his wife, Bonnie, bought the farm in 1979. The Bairds’ story is a familiar one of versatility born of necessity.

“We built the sugarhouse over in the woods for $300 and then we built this one for $3,000, six or seven years later,” Bob Baird said. “We were milking cows here and we wanted to be near the barns, it was just too hard to go back and forth to the woods. We sold the dairy herd in ’96. After that we raised dairy heifers until 2013 or 2014. We have some cattle here but not very many, we’re trying to help a neighbor get started in the dairy business. We have them in the summer, we get a bunch of animals from Tinmouth.”

A farm up the road harvests hay off the Baird fields.

“After we sold the dairy herd we started putting more time and money into maple. There’s been a gradual transition to modern facilities. We’re about halfway through a remodel.” 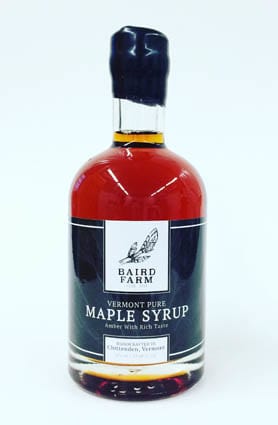 By Jenna Baird, Baird Farm
Baird Farm in Chittenden has been producing maple syrup for 100 years, through generations.

The division of labor and the equipment has changed considerably from the old days.

“Trying to make a living on a small farm has been probably a struggle for generations here,” said Baird. “When you see the price of real estate, it would be very hard to start something like this from scratch now. It costs about $50 per tap to start up.”

Pointing toward the steep hillside opposite the farmhouse where 5,000 taps are dripping sap into saplines, Jenna Baird said, “The three of us do the tapping. We have four-wheelers so we take those on the trail, and then once we’re out there we hike. We use snowshoes, and crampons when it’s icy.”

Sweethearts since 10th grade, Baird and Powsner spent about six months volunteering with Worldwide Opportunities on Organic Farms (WOOF) on a goat farm and vegetable farms out West, followed by a year in Oregon, returning to Vermont in 2015.

This is the couple’s third sugaring season on the Baird farm.

They have formed a separate retail business of their own, Baird Farm Maple Syrup.

Sap from all 11,000 taps come into the sugarhouse through vacuum lines, unlike many small operations that gather the gravity-fed sap from roadside tanks.

“We have 15,000 gallons of sap storage, it’s filling up today,” Bob Baird said. After boiling, he fills 40-gallon stainless steel drums with syrup.

Baird ships bulk syrup as far away as New Zealand, where it is in demand, and also sells to his daughter and Powsner, who bottle it on-site in food-grade plastic jugs to sell through the retail shop and online. The shop also sells wholesale to local businesses and to restaurants, mostly out West, Powsner said.

Bob Baird said, “Sales prices are down, there’s a lot of competition.”

The Bairds keep costs down by doing construction work themselves, enlarging the sugarhouse with a bottling room and the retail store and by converting to reverse osmosis, a process that filters water out of the sap through a membrane, leaving a maple concentrate, thus saving over 90 percent of fuel and time in the boiling phase, according to Baird.

“We save over 10,000 gallons of fuel every year. Anybody that’s making a living off this has to turn to reverse osmosis,” he said.

He used to store 50 cords of cordwood for boiling. Now only a little over a quart of heating oil is required to make a gallon of syrup, he said.

Constant upgrading is the secret of success, especially in the food business.

“Everything is stainless steel, food-grade” he said. “One of the reason we’ve been relatively successful is we take care of our equipment.”

Next year he will replace the traditional open rooftop ventilator with a steam hood and pipes.

“It will be more USDA Food Quality,” he said. “We’ve never had a problem, but we also don’t want to ever have a problem. Food inspections are getting to be more and more of an issue.”

Asked how the season is going, Jenna Baird said, “Good so far. We like to make about a half gallon of syrup per tap, so we’re about halfway there right now. It’s all weather-dependent.”

Powsner explained that temperatures must alternate between cooling and thawing, day or night, to create pressure inside the tree that makes the sap flow. Even with a couple of 70-degree days this year, the nights got cold again and the sap still ran, “but if the weather continues to stay that hot, then you’re pretty much done,” added Baird.

The couple noted that they were able to start making syrup on the same date as last year.

“Last year was a record year for a lot of people,” Powsner observed. “We’re sort of on track to have a good year this year.”

As with most family farms, diversification is important, as are side incomes. Jenna Baird and Powsner both work “off-farm” in the summers and Bonnie Baird, herself a farmer’s daughter, is an accomplished painter of atmospheric rural landscapes whose work is carried by the Northern Daughters Gallery in Vergennes.

For Jenna and Powsner, “Our goal is to be able to support ourselves doing this, eventually.”

For Bonnie Baird, “We’re trying to invest in our own children and also for a selfish reason – we can pass the farm on, and it’s not like it’s going to a stranger.”

Thinking back, she said, “When we were milking cows and bought the farm from his dad, it was struggling at times. I remember one time I didn’t know if we could pay our health insurance. And on a farm you need it because you could get hurt so easily.”

“Sugaring off” – when the sap boils down to just the right color and consistency of syrup. An occasion for traditional “Sugaring off“ parties wto celebrate the end of winter.

“Boils down” – when an issue is reduced to its essential facts

“Sugars off” – same as boils down

“Sugar snow” – the (hopefully) last snowfall of the season when nights are cold, days are warm(ish), the sap is running and birds are returning. Soft snow, melts quickly.