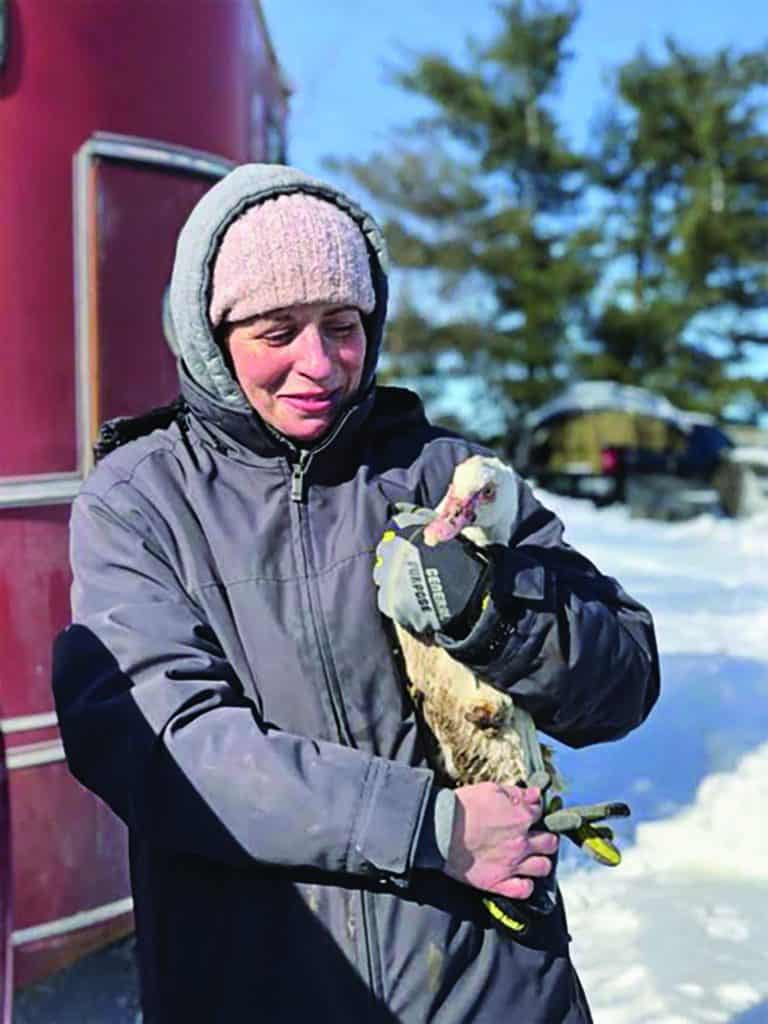 BRANDON — The number of animals relocated from a troubled farm in Brandon has risen to 400.

Police executing a warrant on Jan. 31 initially seized 125 animals on the farm owned by William M. Hegarty, 54, and cited him for animal abuse.

Animal welfare officials, including Erika and Mark Gutel of Kinder Way Sanctuary, and volunteers last week wrapped up a couple weeks rounding up more animals — many of them fowl — on the Kimball Road farm.

The police affidavit in the case and accompanying photos illustrate horrific conditions at the farm.

“There were so many hiding, it took days to get to them all,” Erika Gutel said. “We were in the dark with headlamps, we were catching them mid-flight. We used fence panels and walked slowly to corral them.”

Around 275 ducks, chickens, turkeys and guinea hens were collected from the farm by Kinder Way Animal Sanctuary in Benson. Hegarty agreed to surrender the animals to Kinder Way and the Rutland County Humane Society at his arraignment on Feb. 4, when he pleaded not guilty to two counts of animal abuse.

Brandon Police executed the Jan. 31 warrant assisted by the Rutland County Sheriff’s Department and the Vermont Department of Fish and Wildlife. Initially they removed 15 cats (including one deceased), 12 dogs, 16 pigs, 34 goats, 24 sheep, 14 rabbits, four horses and one cow.

The Gutels and a small group of volunteers spent this past week rounding up the birds, finishing on Monday, Feb. 17.

Erika Gutel said they captured roughly 100 Muscovy ducks, 40 Guinea hens, and seven turkeys. The rest of the 275 birds were chickens and roosters, she said.

Many of the birds were hiding in the rafters of the riding arena at the farms, and in and around the barn and surrounding fields. They captured a one-footed duck that had been eluding rescuers for a few days, Gutel said. On Sunday, they finally got him. The bird has exposed bone where its foot was. Rescuers named him “Dally.”

Capturing and moving the farm fowl was not without danger. Gutel said there was a bobcat watching volunteers from a nearby field on Monday as they returned to the farm to pick up the last few birds that had eluded them earlier.

Gutel said half of the birds went to her farm and half went to Crooked Tails Farm and Rescue in Pittsford because there were simply too many birds to house at her farm. She also said that most of the roosters have “some level of frostbite on their combs.”

The birds require 100 pounds of feed per day, Gutel added.

In the affidavit in the Hegarty case, stories of injured and dead animals found on the Hegarty farm are told in graphic detail. On the day the search warrant was executed, police said they found several deceased animals on the farm and the skeletons of others.

Also in the affidavit are several photographs taken by the person who originally tipped off police to conditions on the Hegarty farm. The photos are accompanied with details as to how the animals died and where the bodies were found on the farm. One image shows a pile of dead baby goats in a barn stall.

One photo depicts a sheep with fatal horns, a genetic condition meaning that the way his horn curled allowed it to start growing into the side of his skull.

The informant told police: “It’s genetic, not anyone’s fault, but it should have been noticed long ago. I’m surprised he’s alive to be honest. I’ll be putting him down today since his horn is literally growing back into his skull. It reeks of infection. If I hadn’t gone to get him, he would have died from this within a few weeks from the infection of having the horn restrict his jaw so he couldn’t eat, or piercing his brain. A slow and painful death.”

The investigation is ongoing, and Brandon Police Chief Chris Brickell on Monday said additional charges may be filed after he receives reports from the veterinarians on the health of the 120 animals originally seized.

Residents all over the area, including parts of Addison and Rutland counties, volunteered to foster many of the animals seized from the Hegarty farm. Veterinarians have been making their rounds, assessing the health of the animals and clearing them to be moved. Once cleared, the animals can be adopted and are either moved to Kinder Way or allowed to stay with the foster families who want to adopt after Kinder Way approves the home.

Kinder Way did not realize the number of animals involved in the Hegarty case when it originally reached out to take the animals. The Gutels started a GoFundMe online fundraising effort to raise $5,000 for feed, hay and bedding to care for the animals. As of Tuesday morning, they had raised $1,125. To make a donation, go to gofundme.com/f/help-support-kinder-way-farm-sanctuary. The feed store number is 802-438-2221.

Bags of feed and bales of hay have appeared at the farm, dropped off by generous donors.

“People have been so wonderful, donating hay and calling the feed store directly,” Erika Gutel said. “The community has really stepped in and helped us so much. The animals are recovering and doing well. It will be a long road for them, but they’ll be OK.”

Because the foster families will only be reimbursed for costs incurred between the Jan. 31 seizure and Feb. 4, the day Hegarty surrendered the animals, donations are also being sought to offset the costs of feed and bedding. To donate call the Brandon Animal Control at 353-0340. The Rutland County Humane Society in Pittsford also took in many of the animals, so donations are needed there as well.