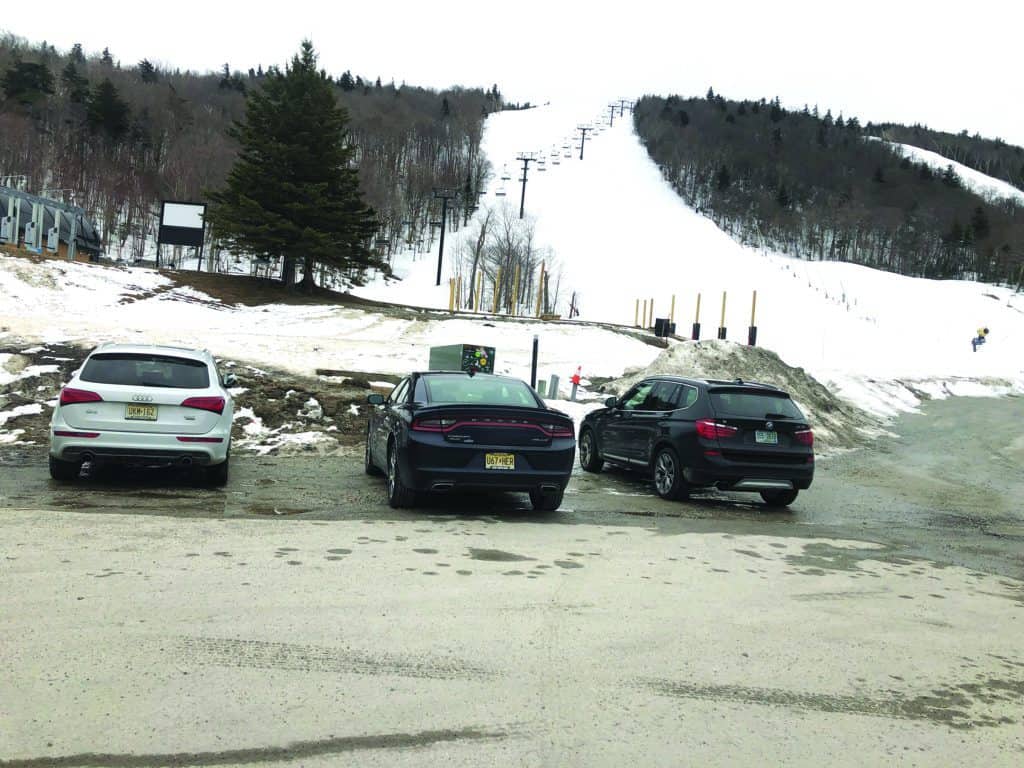 Not at resorts, not if you have to travel to ski or ride

On March 24, Governor Phil Scott issued an executive order directing Vermonters to stay at home or in their place of residence, leaving only for essential reasons such as: personal safety; groceries or medicine; curbside pick-up of goods, meals or beverages; medical care; exercise; care of others; and work, as set forth further.

So the question that everyone was asking was: does this mean we can still skin and ski?

At a press conference, Gov. Scott said:  “Outdoor activities  like dog walking or cross-country skiing are fine, but it is critical people keep a social distancing of six-feet apart, minimum.”

What that means has been a topic that’s lit up the internet, pitted locals against out-of-towners and caused some areas to put up concrete barriers to keep skiers out of the access roads or parking lots.

“I skin every day,” said Michael Christopher Owens, director of alpine touring at Magic Mountain in the winter and a regular competitor of the Northeast Rando circuit. “But I stay within 30 miles of my home. I don’t ski on trails or in conditions where I think I might get hurt and I practice social distancing.”

When we caught up with Owens he had just returned from a skin at a nearby ski area. “However, it’s crazy there — there were cars parked all over the place — probably 60% of them with out-of-state plates. There were people hiking up in regular ski boots — and it’s really icy now. People come to these ski areas expecting the trails to be like they were during the winter and groomed and that’s not the case now. And when they are heading up the mountain, they are not practicing social distancing. I had a guy skin right up to me on a skin track and start chatting. He looked stunned when I asked him to move away.”

Owens has also had to deal with people from out of state asking where they could rent AT gear. “I told this one dude from Connecticut  who reached out to me on a Facebook group, ‘No, you can’t rent gear here and you should stay home.’ He just didn’t get it. Then he said “Well, I’ll just come up and ride my mountain bike.”  I know people have second homes up here but the whole point is not to move around, not to drive across three states or to have to stop at a gas station. Honestly, it’s gotten so bad I’m leaving a lot of these Facebook groups that focus on skiing. ”

At Pico Mountain, a group of skiers from the Boston area had to be rescued Saturday, March 21, after one of the guys fell about 700 feet after slipping on the icy snow. They were also walking up in ski boots and the conditions were extremely firm, according to sources at Killington Search and Rescue who lead the rescue effort. The man that fell reportedly severely hurt his hand trying to self-arrest on the ice, but was otherwise ok.

“I’m not surprised,” said Murray McGrath, KSAR member and owner of Inn at the Long Trail. “They have to worry about the liability associated with being an attractive nuisance.” But he added that he was personally upset by the closure as he enjoyed skinning up the trails regularly, as did many responsible locals.

Jay Peak and others have faced a similar appeal. Shortly after Jay closed on March 13, it erected barriers across its access road.

“It wasn’t so much that people were not obeying the social distancing measure, but more that we wanted to avoid them simply getting in their car and driving up here. That takes gas and at some point, they’ll have to go to a gas station,” said the Snow Bowl’s general manager Mike Hussey. “Also, there’s no ski patrol here, no chance of an immediate rescue and even if there was, we would be exposing others. The added load on the emergency services is an unnecessary burden on a group of folks that are working really hard to get ahead of this virus.”

Sugarbush Resort’s president Win Smith has been posting about skinning and wrote this on his blog: “We are still permitting uphill travel as has been our policy, but we ask everyone to do it in a responsible fashion. If we find this is not the case, we will be forced to stop uphill travel. ”

Craftsbury Outdoor Center had closed its facilities but continued to groom its trails and allow skiers to use them last week. “We’re not open, but we’re grooming the core trails and Ruthie’s and Sam’s,” said Sheldon Miller of the Craftsbury Outdoor Center, on Friday, March 20. “We sealed up the 2021 manmade pile for November the other day too,” he noted, referring to the novel way Craftsbury has developed to keep piles of snow frozen over the summer by covering them with wood chips and then using that snow as an early season base.”

Yet, by the next day, things had changed. A new notice appeared on the Craftsbury web site, effective Sunday, March 22:

We had hoped to keep some trails groomed as long as the snow allowed, but we now feel forced to close for the following reasons: Skiers are not keeping  ‘social distancing’ (6 feet) from each other. This is critical behavior for all of us to follow at all times. Skiers are gathering in groups to socialize. Even a group smaller than 10 people is at increased risk of sharing germs. We appear to be attracting folks from outside our VT community and this does not seem like a good idea at this time. So, effective Sunday, March 22, we will no longer groom our trails and we ask you not to come to ski. We do this in the best interest of the health of the COC community. Stay healthy!”

This story was originally published March 26, 2020, at vtskiandride.com.