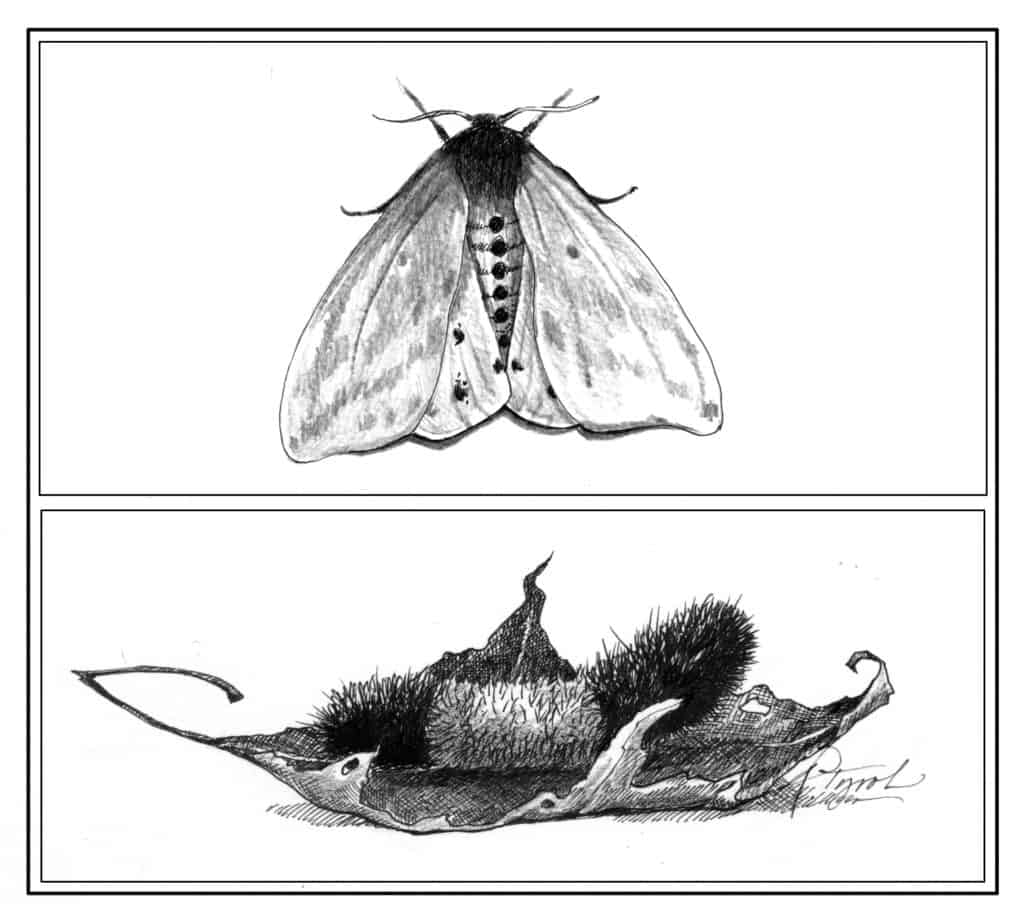 Woolly bear caterpillars seem to be everywhere these days – creeping across the lawn, along the road when I’m walking the dog, hidden in the wilted cut-back of the perennial garden. Last week I found a woolly bear curled up in a shoe I’d left on the front porch. These fuzzy, black-and-brown-banded caterpillars seem intent these days to get somewhere. Where that is – and how they know – is a mystery.

“The purpose for their wanderings is not clear,” said Jack Layne, a biology professor and woolly bear researcher at Slippery Rock University in Pennsylvania. “It starts well before they hibernate, so it may be connected to finding food sources.”

Wait – a caterpillar that hibernates? Turns out the black bears aren’t the only ones bulking up for the coming winter and looking for a place to hunker down through the snowy season; the woolly bears are, too.

Woolly bears are the larvae of the Isabella tiger moth (Pyrrharctia isabella), although the caterpillars seem to get all the love. With their name and fuzzy appearance, they are, perhaps, among the most adorable of bugs. When I told my 10-year-old I was writing about woolly bears, she let out an “Awwwww!” on the level normally reserved for such things as fluffy kittens and baby bunnies. This from a kid who despises most things creepy crawly. I think it’s the woolly bear’s setae – the black and rusty-brown bristles that look like fur – that have won her over. She is not the only one beguiled.

“The woolly bear is so beloved by children and adults that it provides a universal childhood connection to nature,” said Dave Anderson, senior director of education for the Society for the Protection of New Hampshire Forests. “It becomes a kind of rite of childhood to find them; often to move them out of harm’s way and sort of care for them as a charismatic caterpillar. We absolutely need ‘insect ambassadors’ to help keep our childhood sense of wonder alive and healthy.”

All that cuteness, however, belies a certain toughness. These small wanderers don’t fly south as adults or overwinter as pupae like many other moth species. Instead they spend their winters as caterpillars, mostly frozen, tucked away beneath leaves or in some sheltered nook.

In late fall, woolly bears develop what Layne calls “freeze tolerance,” creating a natural antifreeze that allows the caterpillars to spend the winter at below freezing temperatures, while protecting their cells so they can thaw out and carry on come spring’s warmer temperatures. The caterpillar’s setae – those fuzzy-looking bristles – trigger the freezing process on the body surface (away from internal cells) and help protect it from the potential damage of repeated thawing and refreezing as temperatures fluctuate through the winter.

As the weather warms in the spring, woolly bears thaw and return to their wandering ways, eating what plants they can find – they’re not picky – before pupating in cocoons that they craft from their own setae and silk. The adult Isabella tiger moth emerges from the cocoon, generally in early summer, and – if successful at mating – lays eggs that hatch in the late summer or early fall. More southern populations of this species may produce two generations per year, Layne said, but northern populations typically produce a single generation annually.

Perhaps because of their recognizability and the timing of their wanderings, there are several weather-predicting legends attached to woolly bear caterpillars. One is that the direction the caterpillars travel foretells the severity of the winter: if they’re headed south, they’re running away from coming cold; north means winter will be mild. Anyone who’s ever paid attention to the movement of woolly bears likely knows they travel any which way on any given day, so there’s not much merit to that tall tale.

Another prognostic idea suggests the severity of winter can be predicted by the width of the caterpillar’s brown band: a larger band means a milder winter; narrower means winter will be severe. Since the brown band grows wider with each molt the caterpillar completes, it’s really more an indication of age – and, Layne said, sometimes genetics.

At this time of year, woolly bears are on the move, eating just about any growing thing they can find. Perhaps in their captivating wanderings, they’re also looking for that perfect pile of leaf litter to curl into and wait for winter to pass.

Meghan McCarthy McPhaul is an author and freelance writer based in Franconia, New Hampshire. The illustration for this column was drawn by Adelaide Tyrol. The Outside Story is assigned and edited by Northern Woodlands magazine and sponsored by the Wellborn Ecology Fund of New Hampshire Charitable Foundation.