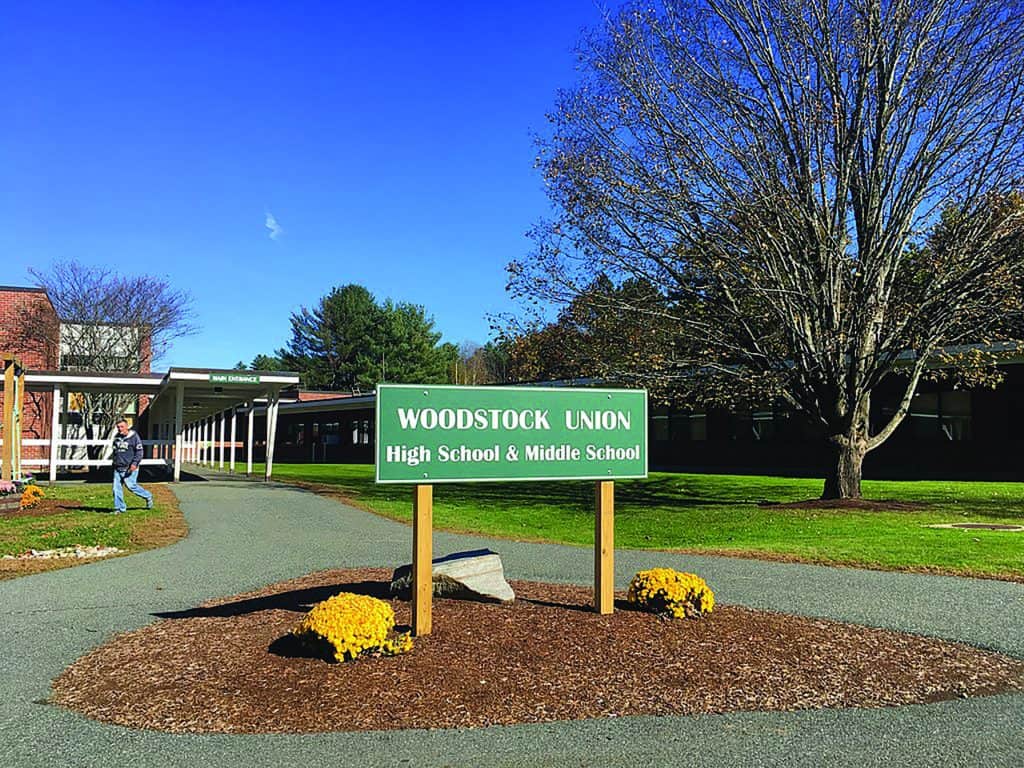 Ford outlined options for financing the razing of the existing Woodstock High School/Middle School and creating a modern, efficient and education-friendly campus for an estimated $68 million— a number that also includes renovations to the district’s elementary schools, including mitigation of moisture at The Prosper Valley School in Pomfret.

Board co-chair Paige Hiller of Woodstock had charged the committee with a goal: to identify a project and financing that would raise education taxes a maximum of 15-18%. (If the full amount were bonded over a  30-year period, which no one is recommending, it would produce a 31% tax increase impact — over $500 on a $250,000 home belonging to someone with no income-sensitive deductions.) Most board members agreed that a bond of  about half that might pass.

Woodstock representative Clare Drebitko suggested community focus groups to spread information about the need for the new school. She urged focus on soliciting the alumni – there are 1,300 followers on the alumni Facebook page.

Ford suggested an additional avenue could be “local option tax,” in each town, to raise funds.

“Local option taxes are only allowed in certain towns,” said Haff, who is also a select board member in Killington. “Not all seven towns are eligible. And if you try an option tax in Killington, where it is allowed, it wouldn’t pass anyway.”

Superintendent Banios urged Board members to talk to state representatives and senators.

“Tell them why the state should be helping us,” she said.

Though the district is 200 students smaller than in 2003. Ford thinks making the district a “destination school system,” meaning that people would move within the district because of the schools, will be possible with the new campus.

Things got sticky when Ford made a motion to contribute money from the current 2019-2020 district budget to free up some of the matching funds. Discussion included options from $25,000 to $200,000.

“This will indicate to potential donors the board has skin in the game,” Ford said.

Superintendent Mary Beth Banios said she believed she could find available money in the budget without diminishing programs or staff time.

Ford said the Board would be able to recoup the $450,000 from the proceeds of the bond.

Barnard representative Pam Fraser objected to spending $450,000 before the voters have approved the bond, stating that a vote is necessary before any work is done.

“People ask me about the impact on their taxes, and I say, ‘I don’t know,’” Fraser said. “All we are talking about are dreams, and we are moving ahead without knowing the actual numbers.”

Killington representative and Board co-chair Jennifer Ianantuoni said the board has already paid the architects $150,000 that was privately donated funds.

There were several unanswered questions when the meeting ended and many district board members were frustrated either with the lack of a vote to move forward or with the committees suggestion that the board move forward with funds for a project not-yet approved by the board or district voters.

The board tabled the motion to use funds for a scoping study until its Nov. 25 meeting.

Did you know we have a podcast?? Check out the latest episode and subscribe to My Side of the Mountain podcasts.apple.com/us/podcast/sheep-farming-and-vertical-integration/id1578946939?i=1000530437913 ... See MoreSee Less

‎My Side of the Mountain: Sheep Farming and Vertical Integration on Apple Podcasts

‎Show My Side of the Mountain, Ep Sheep Farming and Vertical Integration - Jul 29, 2021
View on Facebook
· Share

Rutland's found itself with some extra cash, but taxpayers will be paying more toward education: mountaintimes.info/city-surplus-helps-to-offset-municipal-tax/ ... See MoreSee Less

Notice anything different about Grace Church? Last week, it had the top of its steeple removed. mountaintimes.info/iconic-grace-church-steeple-up-for-repairs/ ... See MoreSee Less

Iconic Grace Church steeple up for repairs - The Mountain Times