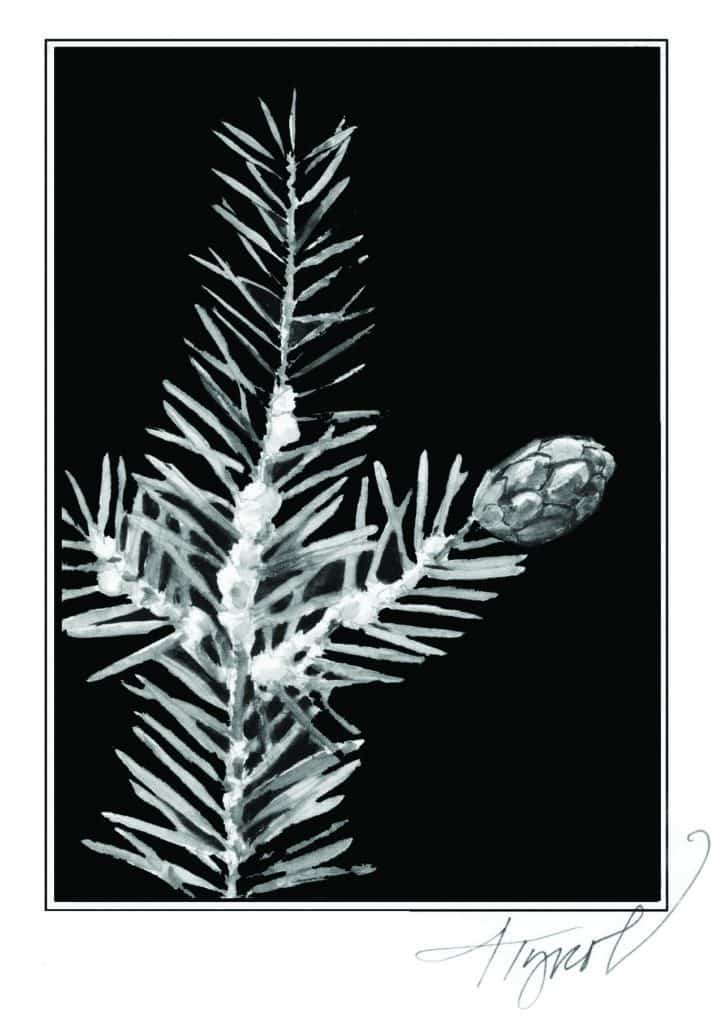 One spring-like afternoon this winter, I was skiing near Middlebury, Vermont. The trail followed Otter Creek, weaving through cedar patches, hemlock groves, and past the occasional hardwood. It was one of those days where you can shed a few layers and still break a sweat when the sun spills through gaps in the canopy.

These warm winter days are often a pleasure to experience, but they also contribute to the rise of the hemlock wooly adelgid, an invasive insect that has caused widespread decline of eastern hemlock stands throughout the Northeast in recent decades. Hemlock is a keystone species, integral to the design and function of the ecosystem. For example, hemlocks’ dense foliage provides habitat and shelter for birds like the goshawk and several species of warblers. The trees cast heavy shade over streams, which is essential for brown and brook trout. Without the eastern hemlock, our forests would look – and function – much differently.

Hemlock woolly adelgid (HWA) attacks both eastern hemlock, the species found throughout New England, and Carolina hemlock, which grows in the southern Appalachian Mountains. The aphid-like insect is a mere millimeter in size, black, and oval in shape. You’re more likely to see evidence of the insect than the pest itself; the telltale sign is a white, fluffy egg mass on the underside of hemlock needles. The wool-like egg masses are most prevalent on infected trees from January to June.

Native to Asia, hemlock woolly adelgid has been in the United States since the 1920s and was first identified in the east in 1951. It likely arrived on the East Coast via ornamental tree plantings and has spread across nearly half the range of the eastern hemlock, which runs from southern Quebec through Georgia.

The species of spruce that are required hosts for HWA to complete the sexual reproduction part of the life cycle do not grow in the United States. However, the insect can continue to create adult females through asexual reproduction. In our region, HWA produces two generations each year.

HWA larvae cause damage by sucking sap from the base of hemlock needles. The tree begins to weaken as nutrient flow is disrupted, leading to needle drop and premature discoloration. This defoliation leads to tree death within 5-10 years.

Unfortunately, warmer winter temperatures caused by climate change bode well for HWA – and poorly for eastern hemlocks. Hemlock woolly adelgids begin to die on days when the sustained temperature is below freezing, known as “kill days.” The fewer kill days there are, the more likely it is that HWA will maintain high populations throughout the winter. Warmer temperatures could also allow HWA to exist in more northern locations.

Foresters use an array of tools to fight HWA, including insecticides, biocontrol, and silvicultural measures. Stand thinning is sometimes used before an invasion to minimize overstocking, giving healthy trees access to nutrients with less competition. Some hemlocks have some genetic resistance to HWA, but it is challenging to locate these trees during the onset of an invasion.

“Hemlocks are iconic fixtures of many of America’s favorite forests and their treatment or removal is a financial burden to landowners,” said Alex Neidermeier, a forest health specialist based in Washington, D.C. “With a changing climate, HWA will likely shift the species’ composition of northeastern forests, as it already has in the south, and have knock-on effects for rivers, soils, and organisms who share woodlands with these trees.”

As the weather continues to warm and the snow fades away, my worry for hemlock grows. The National Oceanic and Atmospheric Administration (NOAA) reported that this January and February were some of the warmest on record, and the rest of the year could follow this pattern. I can’t help but wonder if there will be fewer hemlocks to shade the trail in the years to come.

Olivia Box is a freelance writer and a graduate student at the University of Vermont, studying forests threatened by climate change and invasive pests. The illustration for this column was drawn by Adelaide Tyrol. The Outside Story is assigned and edited by Northern Woodlands magazine and sponsored by the Wellborn Ecology Fund of New Hampshire Charitable Foundation: [email protected]