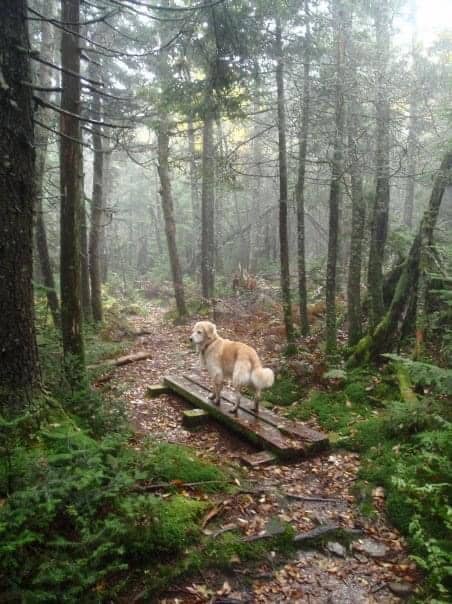 I’ve always loved Vermont. As a kid, my parents would pick my sister and me up from school every Friday afternoon and we would make the four hour trek in our Jeep Grand Wagoneer. The woodie kind. And we’d head out skiing first thing on Saturday morning. It was an amazing dream world where everything was covered in snow and all the people were wearing smiles underneath their TurtleFur. There was no question as to whether we wanted to stay south on these weekends. Home was where we went to school and worked. Vermont was where we lived.

Like so many other Vermont transplants, I never imagined I could actually live in this dream world. I did my schooling and kept imagining the all-important role I would have in the world. But then, one summer during graduate school — I stayed. And I walked. Together with my golden retriever, Vespi, we spent that summer exploring every trail the Green Mountain Club had built in the Killington area and were stunned deep in our souls. It felt like they were never ending. While I had grown up in a state park down south, it was nothing like Vermont. There you felt like you were just walking between towns, quick jaunts on exposed rock, amidst bushes constantly recovering from forest fires while the sun beat down mercilessly. In Vermont, it felt like you were hiking up into the mountains, sneaking away under the canopy and walking straight into a dream.

Of course, we learned about black flies, too. I mistakenly took my first hike on the original Long Trail from McGrath’s up to Killington Peak at the beginning of June and was horrified to discover the back of my neck had become a bloody chew toy. Vespi would have a bite on her eye or her lip with flies crawling all over her head. But experience can be a powerful motivator and we quickly learned about bug lotion for dogs, bug nets for humans and the glory of the simple bandana. We would not be deterred. Nothing would stop us from this newfound connection with the earth.

We would walk for hours and days, learning about the land. When you walk, you notice so much of the earth and what grows from it. The types of rocks and plants and how they affect the soil beneath. Within the first five steps, one realizes that you cannot walk in the woods in Vermont without conscious foot placement. Which means you have to notice the earth, to actually look at her construction, to feel the surface beneath your feet and to listen to the noises surrounding you beneath the thick canopy. To walk in the woods in Vermont, you have to completely immerse yourself in the experience and purposefully move into that dream world.

I learned a lot from watching Vespi, how she manipulated the rocky sections, how her paws spread to wrap around a rock rather than digging her claws in and how she adjusted her pace in anticipation of a technical section up ahead. The bf and I would joke at her switch to “four-paw drive” as we got to steeper sections, like the spur trail to Killington Peak, or the random ladder hidden in the woods. But I found myself, more often than not, matching my footwork to hers. Instead of trudging through straight with a big heavy pack, I started moving my whole body and playing with the rocks on the trail. Instead of a walk, it began to feel more like a dance as I swung my hips with the movement of the trail, almost as if I was flowing like water. It was an amazing transition and for the first time in my life, I felt myself be part of the mountain and of the earth.

I was living in the dream.

After that, there was no way we could leave these mountains. Vespi had opened my soul to the world underneath the canopy and had helped me to not just see the earth but to listen and feel. How can you separate yourself from something that is now a part of you? That summer turned into many, many more with lots more miles under our belts, especially as we discovered skinning that winter.

Life under the canopy became our safe place, our footsteps on the trail were our meditation and we left the woods with a connective sense of calm. These mountains are so old, with so much to teach us if only we would step into the dream and let it surround us. To give over to the mountains and listen as we let them guide us through. To truly feel the spirit of these green mountains within us.

The Mountain Times is in Clarendon, Vermont.

Getting a selfie with the monolith just got a whole lot easier! ... See MoreSee Less