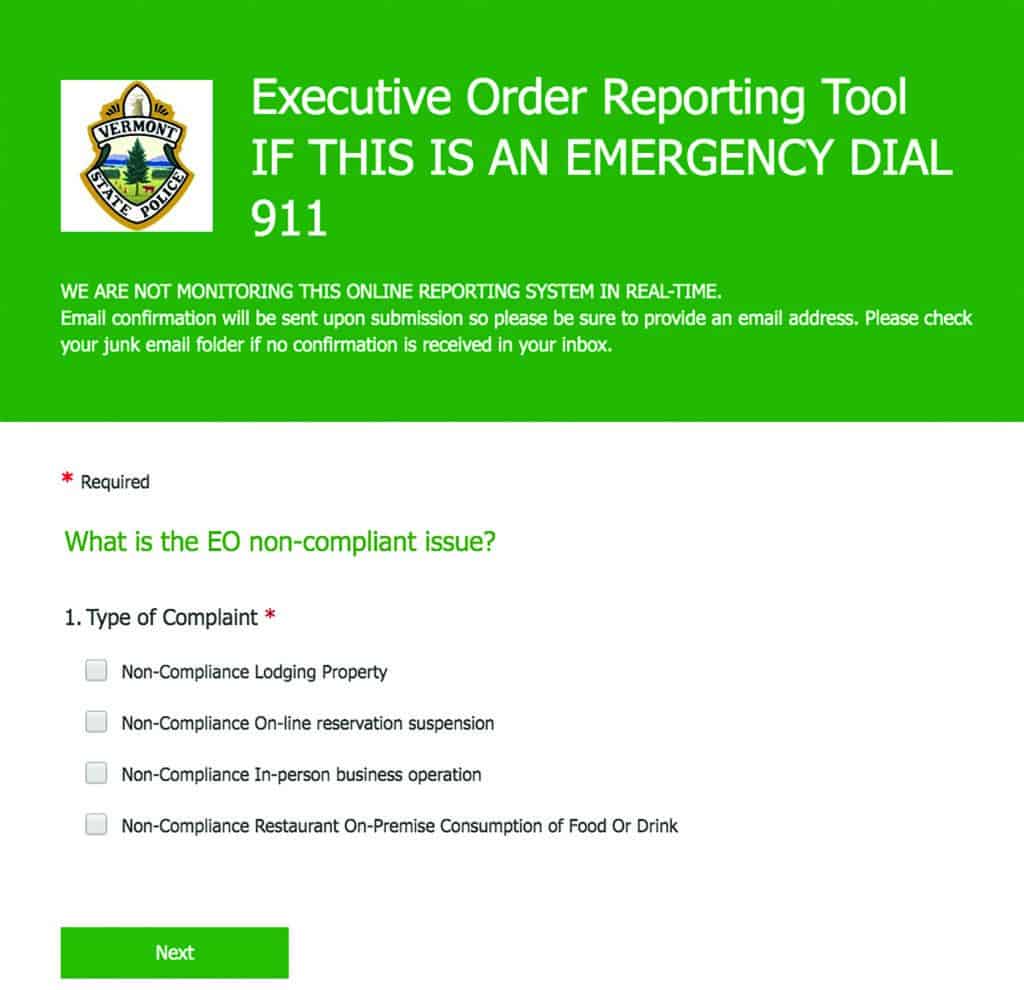 Some of the messages read like field reports: “The sidewalks between Price Chopper and Walmart had groups of people standing together no mask or social distances,” and others like warnings: “I want to make you aware of the health crisis that is ongoing at the floating bridge in Brookfield. Since fish were stocked in the pond it’s become a daily gathering spot of dozens of covid ignoring people.”
Others are more inquisitive: “Picture below shows people at Roxie’s in Bomoseen, Vt., around 5 p.m. I am the only one wearing a mask. Can you ask the Governor at his Monday press conference what citizens should do if they witness these blatant violations of his mandatory mask order?”

They all refer to a rapidly evolving part of our social contract: compliance with Covid-19 public health guidance.

Peter Erb of Hinesburg emailed: “I just did a foray to the recycling center and to get gasoline and probably not one in ten people has a mask on,” he wrote on May 4. “We have made too big a sacrifice for this to fail,” he added. “Governor Scott must mandate face masks as we loosen up or all will be of naught.”

The governor and attorney general have taken an intentionally light-touch approach to coronavirus enforcement. Scott often says he prefers to “lead,” rather than “drive” or “educate” rather than “mandate”— even as he is taking small but steady steps to reopen the economy and social interaction. The governor “strongly suggests” that individuals wear masks to protect other people from getting Covid-19.

That has made shame and public scolding two of the main sticks in Vermont’s coronavirus compliance system. From social media groups to news website comments and official channels set up by the state, many Vermonters are not only proudly falling in line, they are on guard, and going public with their grievances.

Jens VonBulow emailed about a trip to Walmart on April 26. “As I waited in the truck I noticed that most people were not wearing masks as they went in to shop. Some were, but most were not,” he wrote, adding that his wife observed the same thing inside, along with staff wearing masks around their necks. “We won’t be going back to Walmart anytime soon,” he added.

VonBulow said in a phone call last week that he considered calling Walmart about the issue. “I just decided that I wasn’t gonna waste my breath,” he said. “Because what would they do that they weren’t doing now? I’m sure they weren’t gonna buckle down and require people or ask them, you know.”

Instead he emailed. “I just wanted to vent I suppose,” he said. Asked about VonBulow’s account, Rebecca Thomason, a Walmart spokesperson, said the company posts banners, decals and other reminders around the store to encourage compliance with social distancing and wearing masks.

“I understand that in Vermont it’s not required, but we are absolutely trying to suggest and follow that everyone is mindful and and wears their masks for the sake of everyone,” she said. “But at some point, we’re doing all that we can to make sure that the public is aware and to ask that they follow it.”

Some big box stores, including Costco, are now requiring customers to wear masks, a decision that has drawn its own social media backlash. Walmart’s enforcement philosophy is rather similar to Vermont’s. “I’d rather have people want to do it for the right reasons than force them to do it,” the governor said in an interview Monday.

He said that the state “ranks among the highest for compliance” and has set up a robust testing and tracing program to catch new outbreaks before they become widespread.

While the low case data supports Scott’s lax enforcement policy, many wonder if testing and tracing is better than preventing future initial outbreaks with stronger mandates for wearing face masks, for example. “Wouldn’t it better to do all we can to prevent Vermonters from unknowingly spreading it in the first place, rather than limit the spread once folks are infected?” asked a writer who wished to remain anonymous.

If VonBulow had instead turned to the Vermont Department of Public Safety or the Attorney General’s Office with his complaint — as hundreds of Vermonters have done — the companies could have been among those who the AG has “reached out to…to alert them that their activities – if accurately reported – may be in violation and to request voluntary compliance.”

That list numbered seven as of Thursday, May 7, and included three cosmetologists, one real estate agent, one property inspector, one tattoo artist, and an oxygen supply company, according to Charity Clark, the attorney general’s chief of staff.

Local police departments also say they are getting calls, but haven’t been much solace to those seeking punitive enforcement of Covid-19 public health guidelines.

As of Tuesday, police officers in Burlington “have not undertaken any enforcement on this issue,” Deputy Police Chief Jon Murad said in an email. But the department did “sometimes have to navigate balancing neighbors’ requests to check on others’ compliance (or lack thereof) with the extent of our powers under the emergency order.”

Although the worst fate for these public health scofflaws is a scolding, many Vermonters remain on patrol, online and through official channels.

To enforce or not to enforce?

Apart from the governor’s observations that most people are complying with his executive advice, he has also challenged the notion that ordering people to wear masks will inevitably increase compliance.

“Even with enforcement, it doesn’t mean that you’re going to accomplish your goal,” he said. “Because then there’d be resistance, then there would be people doing more reckless things, possibly.”

Faye Hilliker, a recently retired nurse of 45 years living in Newport, has done medical research on the effectiveness of masks in stifling disease and she disagrees. She compared coronavirus non-compliance to smoking indoors.

“You can’t, because your behavior is now affecting other people,” Hilliker said. “And when you do that, your freedom stops where mine begins. So, yeah, you’re the governor, sorry, guess what that means, you make laws and you make sure that they’re put into place.”

“They don’t believe it, and they’re not stupid people, they just don’t believe it,” Hilliker said of those in her community who refuse to follow Scott’s guidelines. Why aren’t her neighbors staying in line, like her? “I don’t know,” she said. “I have racked my brain trying to figure it out because I was very angry at first, and then I’m like, I gotta let this go.”

Peter Erb, the Hinesburg resident who took a foray to the recycling center, said on the phone Friday that he also ventured recently to a lunch spot in North Clarendon. Apart from being in his 80s, placing him well within vulnerable age territory amid the pandemic, Erb said he was not particularly vulnerable to the virus or its effects. Still he was disturbed by the experience: he said staff members weren’t wearing masks, and were handling food without gloves. He had planned to buy a sandwich, but decided on a container of macaroni salad instead. “I figured there was less chance of them handling that than the cheese and bread and everything, and it was probably in the cooler for a while,” he said.

Why did Erb go out for lunch despite the risks? “Probably because I was stupid and hungry,” he said. “You know, I mean I have a mask on, I distance, I have an alcohol spray which I keep at hand and use.”

Among the governor’s reasons for avoiding punitive coronavirus orders has been not wanting to further burden Vermonters already coping with the many challenges of the moment. Erb said he’d like to see the government enforce the public health orders on businesses, simply by adding masks to the “no shirt, no shoes, no service” policy.

Erb said it’s also dangerous to have citizens enforcing the rules against each other — pointing to violent incidents in other states when citizens have attempted to enforce the rules. In Michigan, a security guard at a Family Dollar was shot and killed after he told a shopper to wear a mask. Erb said he worried the coronavirus compliance divide, played out nationally, could turn angry and politically partisan. He also pointed to a more personal experience.  “My wife got into a fairly contentious discussion in a grocery store when somebody wouldn’t back off, had no mask and just wouldn’t distance,” he said. “And, you know, that’s a fairly controlled situation, and, you know, in Hinesburg.”

3 comments on “Vermont isn’t punishing Covid scofflaws, but citizen enforcers are on patrol”