SOUTH ROYALTON—Two time capsules, discovered encased in a base beneath memorials in South Royalton were opened last Thursday evening, Aug. 9.

Royalton, Select Board chair Larry Trottier, wearing surgical gloves and standing in the gazebo on the South Royalton green, sliced the end from each of the two copper capsules with a small power saw.

Well over 100 people, gathered in front of the gazebo, watched with great anticipation. 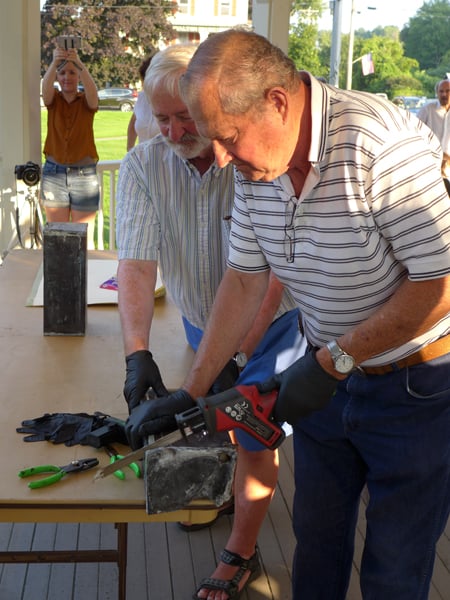 Trottier told the Mountain Times he was hoping there was some connection to his own ancestors in the contents of the capsules.

Like a kid excitedly pulling the prize from a box of Cracker Jacks, Trottier removed and carefully unfolded the first item from the capsule, and held it up for everyone to see – it was a large poster for the August 1915 Old Home Week celebration, announcing a speaker, music, and a Royalton Raid reenactment play performance.

The contents of both canisters were removed gingerly – the first was dry and its contents preserved, but the second had suffered water leakage – and placed carefully on a table. People lined up on the gazebo steps single-file to have a closer look.

Among the items were a Bible, a script for the reenactment play, and a copy of the Aug. 12 White River Herald newspaper. Notably, Evelyn Lovejoy included an unbound copy of her, 1000-page history of Royalton in one of the capsules.

The time capsules were discovered underneath a memorial on the South Royalton green, erected in 1915, which has stood to honor the heroism of Hannah Handy until it was recently removed for restoration and installation of a new base this summer.

But who was this illiterate 18 century woman to deserve such tribute?

On October 16, 1780, in an effort to terrorize Vermonters suspected of staging raids into British Canada, Lt. Richard Houghton, six British soldiers, and 300 Mohawk warriors came south from Quebec to raid and burn the Upper Valley villages of Royalton, Sharon and Tunbridge.

Twenty-seven adult and 10 juvenile males were captured in Royalton, which then consisted of about 25 homes. The raiding party left, intending to take the captives to Canada and turn them over to the British – it is thought the boys would be sold as laborers.

Among the men were Michael Handy, whose mother, Hannah, followed the raiders to Randolph and successfully implored and shamed Houghton into ordering the release of his juvenile captives. Houghton provided escort for Handy and her charges back to Royalton.

The event is widely known as the “Royalton Indian Raid,” the last of its kind during the Revolutionary War. Its reenactment was staged during Old Home Week in Royalton off and on over the years.

At the time of the raid, Vermont, plagued by conflicting taxation and jurisdiction claims by New York, Quebec and Maine, had declared itself a republic. After the war was over, Vermont’s attempts to become part of Quebec were rebuffed, and it officially became a state in 1791.

John Dumville, current Royalton town historian, said he recognized people in the audience whose ancestors were probably living in Royalton at the time of the raid.

Trottier, who also had connections, said his father bought their family farm on Dairy Hill from a niece of Evelyn Lovejoy, the town historian who, inspired by Hannah Hardy’s story, instigated creation of the Handy Memorial and inclusion of the long-forgotten time capsules.

Most of the items in the time capsule were directly related to the Old Home Week events.

All of the contents, Dumville said, will be taken to the Royalton Historical Society for study, restoration and protection.

The property received 5 cash offers the first day it was on the market! ... See MoreSee Less