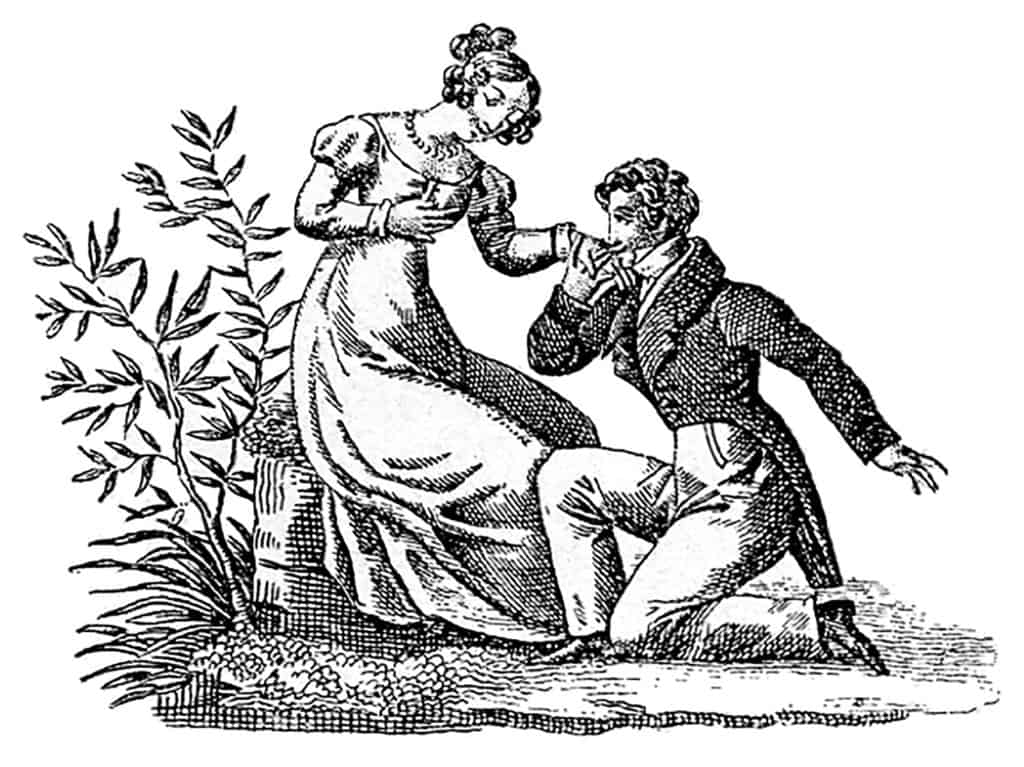 Editor’s note: Mark Bushnell is a Vermont journalist and historian. He is the author of “Hidden History of Vermont” and “It Happened in Vermont.” This column was published in VTDigger Nov. 10.

Lucy Martin wasn’t mincing words. Her marriage was failing and she wanted the world to know why. Her husband, she wrote in a newspaper notice in 1795, had “ever since our unfortunate marriage, lived by the Fruit of my industry principally.”

Martin’s words were contained within a notice printed in the Vermont Gazette, which was printed in Bennington. Such candor might seem unexpected given our usual sense of the era, but Martin’s notice was part of what was then a common practice. So-called desertion postings, which were frequently published after a married couple became estranged, were a fixture in newspapers. Today, they offer an intriguing glimpse into the power struggles that occurred in some 18th- and 19th-Century marriages in Vermont.
When a woman married, she gave up much more than her last name. By law, she also surrendered some key rights. Principal among these was the right to own property. In almost all cases, upon marrying, women relinquished control of any property to their husbands.

They also gave up the right to enter contracts, sue or even write a will without their husband’s consent. Similarly, husbands dictated what work their wives would do. And if women earned anything from their labors, that payment also fell under their husband’s control. In exchange, husbands promised to provide for his wives and pay any debts they might incur.

This responsibility to pay a wife’s debts might explain why men placed the vast majority of desertion postings. Doing so declared to the larger community that their wives had left them. The men weren’t looking so much for sympathy as for a way to save money. If their wives left, husbands were no longer legally responsible for their wives’ debts. A desertion posting was a way of stating that a woman was now on her own.

But like Lucy Martin, women occasionally decided to place their own postings to rebut their husbands’ claims. In researching her 2005 book, “Stray Wives: Marital Conflict in Early National New England,” historian Mary Beth Sievens reviewed more than 1,500 desertion postings placed in Vermont and Connecticut newspapers. Of those, 71 were written by women.

If the law treated women as subordinate to men, the desertion postings that women published suggest that some wives viewed their roles within the household as at least equal to their husbands’.

By creating a posting, Sievens found, women were declaring that the separation was not their fault. In cases where they had left their husbands, they wrote that it was due to some form of cruelty. If the community accepted the women’s claims, then husbands were still financially responsible for their wives. In other cases, women stated that it was their husbands who had left. In her posting, Martin went further, claiming that her husband had never lived up to his financial obligations as spelled out in the marriage contract.
For their part, husbands often complained in their postings that their wives hadn’t worked hard enough. Sievens found that men made such charges in roughly 20% of their postings. For example, Asa Goodenow published a posting in the Rutland Herald in an effort to cut his wife off from his credit, because she “refuses to labour.”

The Weekly Wanderer of Randolph published a poem in 1804 by a Joseph Lovel to his wife, Suke:

“For she will neither spin nor weave,
But there she’ll sit and take her ease;
There she’ll sit, and pout, and grin,
As if the Devil had entered in;
For she would neither knit nor sew,
But all in rags I had to go:
So, farewell Suke! And farewell, wife!
Till you can live a better life.”

In a time when farming was the principal occupation, women were expected to do myriad tasks. In addition to bearing and rearing the children, mending and washing the family’s clothes, cooking and cleaning, women typically also tended the garden, raised the poultry, milked the cows, and made butter and cheese, as well as soap, cloth and candles.

Also, though they couldn’t own property or incur debt in their own names, they frequently acted as their husbands’ agents, conducting business in their names with merchants, peddlers and the like, thus allowing men more time for their own work.

Not surprisingly, some women believed their unrelenting labor meant they deserved respectful treatment from their husbands. Abigail Pell complained in the Green Mountain Patriot of Peacham that she was “treated worse than a slave” by her husband, James, even though she had always been a “true and faithful wife.” Other postings by women echo this complaint about ill treatment.

These women, Sievens noted, were not denying that they owed their husbands and families their labor, but they still viewed themselves as their husbands’ equals. These differing views on the proper role of women clearly caused marital disputes.

When Thomas West posted a notice in the Vermont Republican of Windsor that his wife, Hannah, had “conducted herself in an unbecoming manner, running me in debt and injuring my property,” Hannah felt compelled to respond. In her own notice, Hannah wrote that it was Thomas who had deserted her. And when he left, he took with him “all my cloth that I had to clothe my family with, & all my yarn that I had spinned … he carried away my flax, wool, and all the provisions which we raised on our farm the last year, which was enough to support our family, and to have sold to the amount of 200 dollars, had it been taken care of in a prudent manner.”

Hannah West was declaring that the flax, wool and yarn that Thomas took were rightfully hers and “the provisions” were theirs jointly. Implicit in her notice was that she would have cared for the farm’s goods “in a prudent manner,” unlike her husband.

In 1814, Sarah Church placed a notice in the Vermont Journal of Windsor, apparently in response to one placed by her husband. If her husband wanted to keep her from amassing debts in his name, he needn’t have bothered. Sarah Church wrote that she had no intention of charging things to her spouse’s tab. She couldn’t say the same for him, however. Church warned her estranged husband and the community that “neither will I pay any more of his debts, as I have done heretofore.”