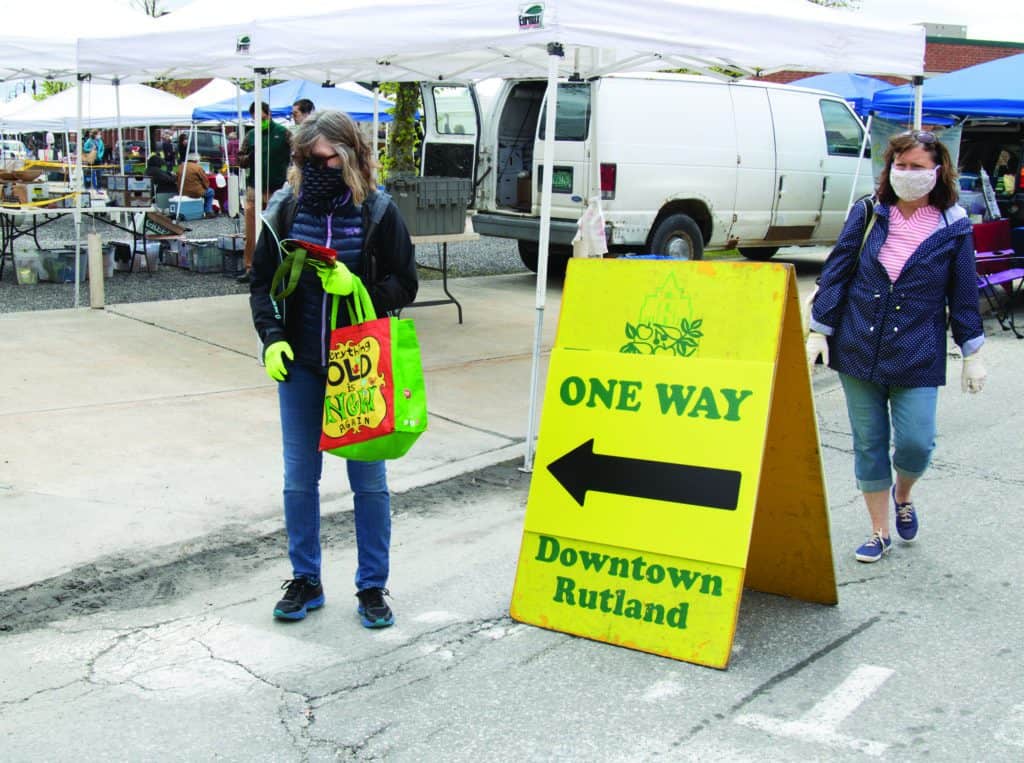 The Rutland County Farmers’ Market reopened on May 16, 2020, in Depot Park in downtown Rutland with restrictions set in place to prevent the spread of Covid-19.

The state Agency of Agriculture, Food, and Markets released a statement last month with rules for Vermont Farmers markets, which they updated on May 6. Under the government order, entertainment like music and children’s activities that encourage people to gather must be suspended and booths need to have 12 feet between one another.

Signs at the Rutland market outlined the rules: 9-9:30 a.m. is dedicated to compromised or elderly customers, no dogs are allowed, everyone is to keep 6 feet apart, no one is allowed to linger and must move in a single direction, those that feel sick are to stay at home, shoppers are not to touch food—vendors will hand it out, everyone is encouraged to clean their hands often, provide exact change whenever possible and pre-order/pre-pay whenever possible.

Face coverings were a bit more controversial. While the state government order said face coverings are required only for employees, Rutland market organizers decided, May 16, they’d be required for everyone. However, the next week, on May 23, customers were no longer required to wear masks. 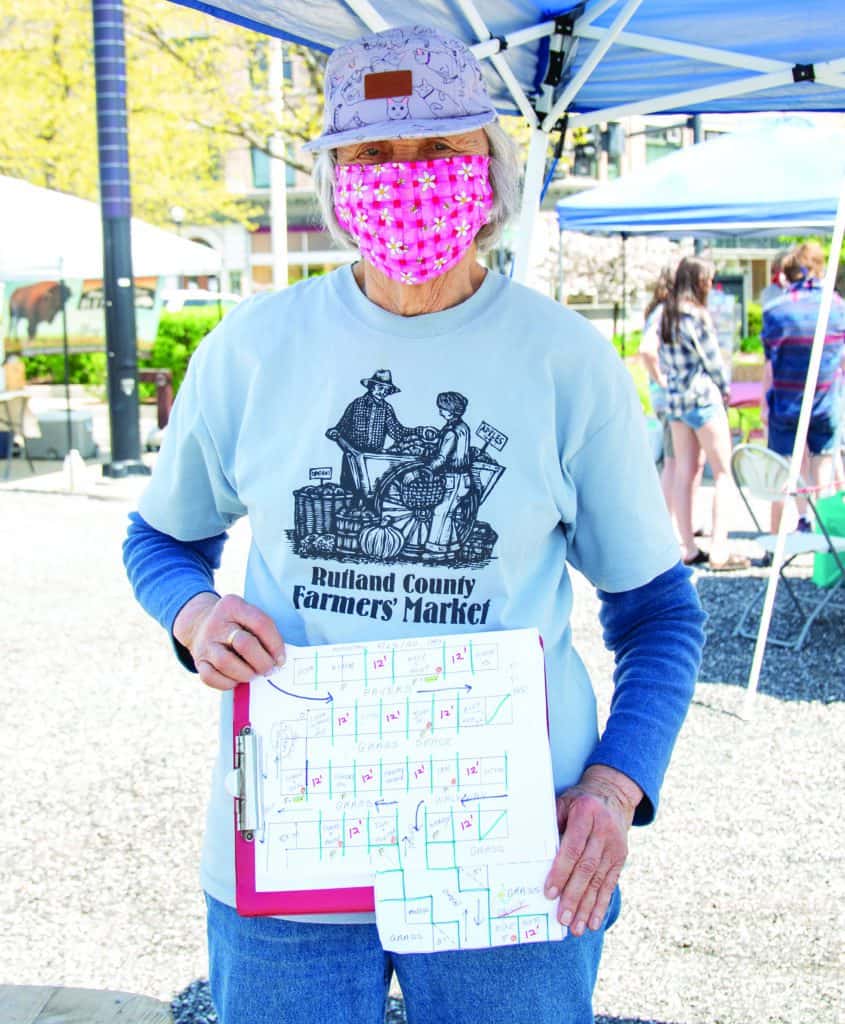 “We thought that masks were mandatory and found out afterwards that the customer doesn’t have to have a mask,” Diane Heleba, a farmer’s market board member said, explaining a miscommunication with the Department of Recreation. Heleba sells potatoes from her potato farm while working the market’s EBT machine, and fittingly wore a potato print face mask. She said that last week, when customers were told they needed masks to enter, they were met with “violent” reactions, and the police were called.

Heleba had a sign at her stand requiring mask-wearing, which she has because of her age, she said. Yet while she spoke to the Mountain Times, she still catered to a customer who wasn’t wearing a mask. She supports Governor Phil Scott in encouraging others to wear masks but feels more comfortable about the market’s relaxing of rules because of the negative response she witnessed the week prior. “I feel better about having a volunteer over there saying ‘Well, we would highly recommend you wear a mask,’ but you know, letting them come in,” Heleba said.

Judy Dark, the marketing manager for the farmers market, manned a table at the entrance to the market with Linda McIntyre, owner of Mello’s Munchies, a homemade dog treat business. Dark would normally be selling herbs and perennials at her own booth but has been helping ensure the market flows smoothly with the new changes. She said that the rules are applied to make sure everybody is safe.

McIntyre said that most people followed the mask rule last week, and only two or three people really gave them a hard time. Yet this week, she said, as masks are now only required for vendors, more customers have responded poorly when offered free disposable masks at the entrance. While McIntyre strongly encourages customers to wear masks, she said, “We have had a few people say, ‘well, if I need a mask, I’m leaving.’ Well, that doesn’t help the market.”

She described the tensions surrounding asking customers to wear face masks as a “gray area.”

The market organizers weren’t the only ones who had felt a bit lost regarding government orders.

Tom Hubbard and Hunter Hubbard, who run Mountain View Bison, said that when the market was shut down, they and their customers were unsure how to conduct business. “We couldn’t tell anyone what was going on, because they were confused just as well as we were,” Hunter Hubbard said. They suffered a significant loss in sales but are hopeful again now that the farmers’ market is now open. Additionally, customers have started coming to their farm to buy meat again, after business was shut down for about two months.

However, most of the other meat sellers haven’t returned to the market.

The 12-feet-between-booths rule means that fewer vendors can fit in the market, but with many not returning, there was space for all vendors who wanted to come, and more.

Ian Thomas Vair, owner of Chaga Moon, said that his online sales have grown during the pandemic, but “restrictions at the farmers market have hurt all vendors.” He was particularly frustrated that vendors are not allowed to sell open-face food. He normally sells iced tea in plastic cups with straws, but the new regulation has led him to selling the tea in to-go jars. He said that the rule was made so customers would not consume food in the market, but he sees them doing so anyway. “We’re one of the busiest vendors here, and we’re struggling. I can only imagine what is going on with other people.” 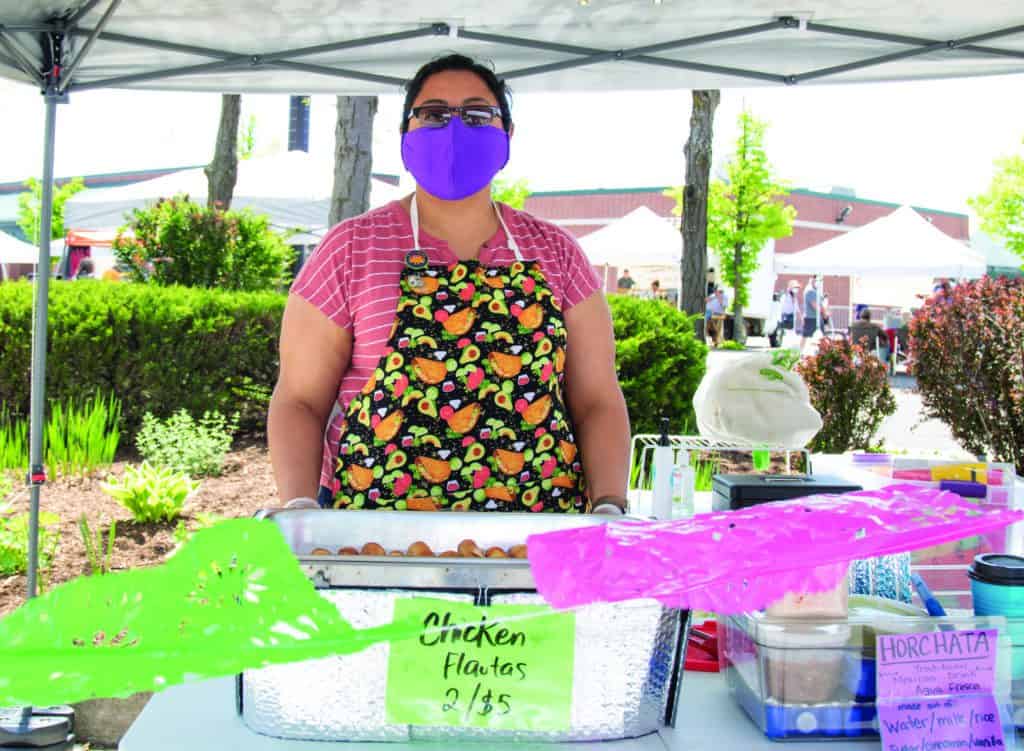 Victoria Covarrubias, farmers’ market board member and owner of Victoria’s Authentic Mexican Food Catering, said that the restrictions against open-face food has caused her to downsize her menu. “I usually have a grill set up where we do fresh tacos, burritos, and quesadillas,” she said, but now she has to prepare the food before coming to the market, even pre-packaging all the sauces. Covarrubias has been selling about four menu options instead of her usual nine. She explained that foods she would normally assemble right when customers order, like burritos and tacos, can get hard or soggy when sitting too long in the heat, so she hasn’t been selling them.

Covarrubias said that customers have been good about keeping their distance at her stand. “If someone sees somebody here, they kind of wait or they go somewhere else, so I don’t feel like it’s not safe,” she said.

Customers and vendors at the market have had differing opinions about the restrictions. Vair follows protocols out of respect, comparing them to other laws, but said that he believes people should make their own choices to stay home if they are at risk for the virus. “Don’t force it on everyone else and destroy our economy and people’s livelihoods—and scare everybody,” he said.

Near Vair’s booth, a young man visiting the market moved his facemask to the top half of his face, and jokingly said, “I’m protecting myself from the coronavirus.”

The Esteves family was visiting the farmers market, “for the empanadas,” they said. They all wore masks. Audrey Esteves said she feels safe because the market is outdoors. “You’re not super close together with anyone so it’s nice… you’re not in the supermarket,” she said. Her mom, Kathleen Esteves, said “thank goodness” that the farmers market is back, with, what appeared to be a big smile on her face.