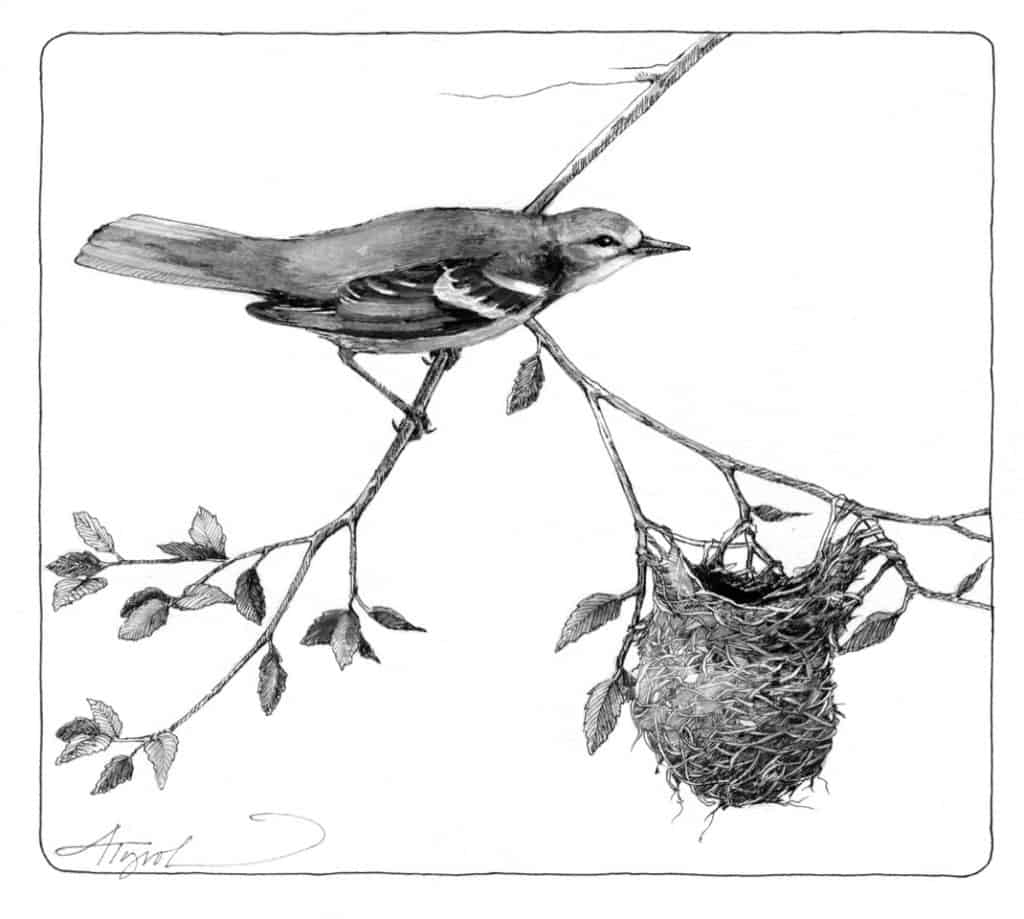 I grew up on a street lined with tall, stately elms. While walking to school one day, I found a bird’s nest that the wind had blown down. The nest was a beautiful, silky gray pouch. My teacher helped me identify it as a Baltimore oriole’s nest. Over the years, I found a couple of similar nests, as elms are a favorite nesting tree of orioles.

Years after the discovery of those nests, I can always tell when the male Baltimore oriole returns to my yard in spring. His rich, varied, flutelike whistles are loud and distinctive; one description is “pidoo tewdii tewdii yewdii tew tidew.” The male usually arrives just as the trees are leafing out, about a week before the female. In his bright orange plumage, contrasting with a black head, he is unmistakable. The oriole is named after Lord Baltimore, the first proprietor of Maryland, whose coat of arms was orange and black.

When the yellow female oriole arrives, the male will court her by bowing, raising his wings, and spreading his tail, showing off his brilliant colors. After choosing a mate, the female constructs the intricately woven nest, suspended from a high tree branch, often in an elm, maple, cottonwood, or sycamore. Orioles prefer to nest in open deciduous woodland and forest edges, along riverbanks, or in orchards and parks. They flit among the treetops searching for caterpillars, ants, and beetles, probing flowers for nectar, and flying out to snatch insects from the air. Orioles will even eat hairy caterpillars that other birds don’t like, including pests such as gypsy moth and tent caterpillars. They also consume berries, grapes, and other fruit.

During a bird walk I attended last year, our leader spied a female oriole in the early stages of nest-building. He trained a spotting scope on the nest, and we took turns watching. The bird moved her beak in and out, weaving grasses around the tree branch to secure the top of the nest. She flew back and forth, bringing more nesting material.

Orioles use hundreds of plant fibers to build their nests, including milkweed silk and grapevine bark, and will incorporate manmade fibers such as yarn. They will also recycle fibers from an old nest. After securing the rim of the nest, the female hangs upside down to weave the supportive, outer bowl. Then she works inside the nest, weaving the inner bowl. Finally, she adds a soft lining of wool, hair, or fine grasses. The process takes about a week and results in a deep pouch with a small opening at the top, which provides good protection from predators and brood parasites like cowbirds (which lay their eggs in other birds’ nests).

“In constructing its nest…the oriole is perhaps the most skillful artisan of any North American bird,” wrote Arthur Cleveland Bent in his “Life Histories of North American Birds.” It is a “little cradle…swinging and tossing in the wind.” In this cradle, the female oriole typically lays four to five grayish-white or pale blue eggs blotched with brown.

Unfortunately, oriole populations have declined in recent decades. According to the North American Breeding Bird Survey, there was a 42 percent decrease in breeding orioles in North America between 1970 and 2014. Vermont and New Hampshire each experienced 2 percent annual declines during this period. Threats to orioles include loss of habitat due to development, pesticides that kill off their insect food and may poison the birds directly, and the loss of American elms to Dutch elm disease. The elms of my childhood neighborhood where orioles nested succumbed to this disease and were cut down.

Orioles face other challenges such as deforestation on their wintering grounds in Central and South America, said Kent McFarland, conservation biologist with the Vermont Center for Ecostudies. They do well high in the tree canopies of shade-grown coffee and cacao plantations, but most coffee now is grown in full sun. You can help orioles and other birds by purchasing certified shade-grown, bird-friendly coffee.

Baltimore orioles can be attracted to your yard by plantings of native trees and fruit-bearing shrubs and by putting out orange halves for them to feed on. Look for oriole nests in the fall and winter after the leaves are gone, when they’re easier to see. A couple of years ago, I spotted one high in a sugar maple in my front yard, swinging in the winter wind – it looked just like the one I had found as a child.

Susan Shea is a naturalist, writer, and conservationist who lives in Brookfield, Vermont. The illustration for this column was drawn by Adelaide Tyrol. The Outside Story is assigned and edited by Northern Woodlands magazine and sponsored by the Wellborn Ecology Fund of New Hampshire Charitable Foundation: nhcf.org.