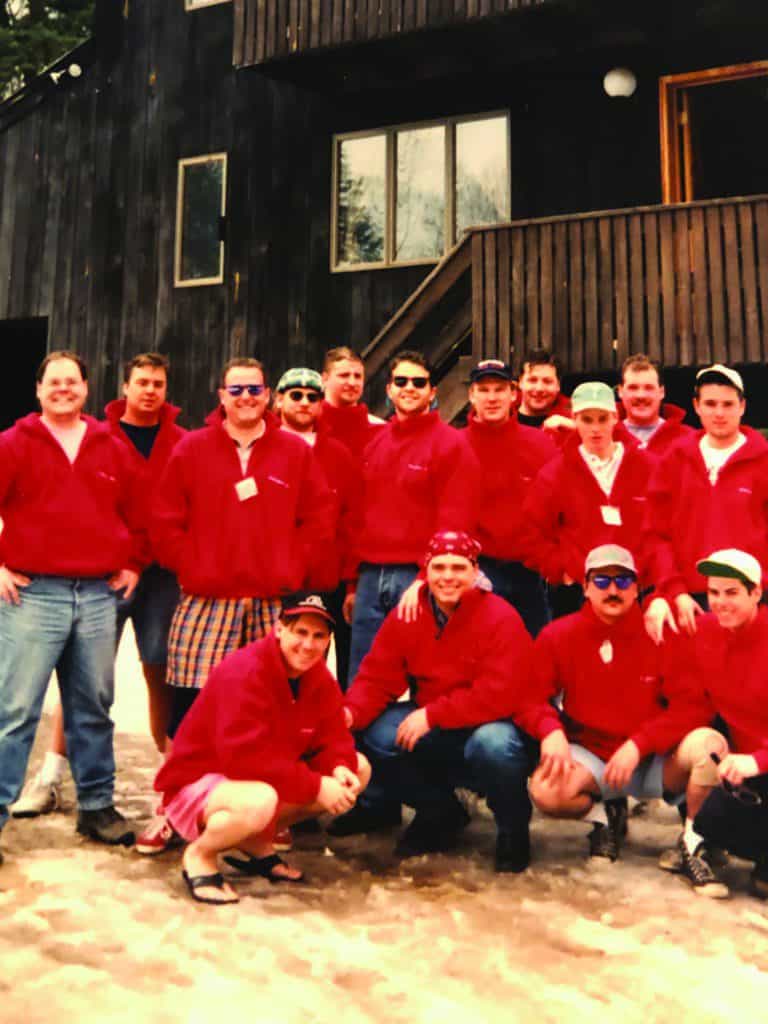 Team Canada is celebrating its 30th year of coming to Killington. Every February, the team comes to town for a mini vacation. You can’t call it a ski trip because there is barely any skiing that goes on. I had the pleasure of speaking with my friend and Founder/Team Captain Peter Whittier.

Whittier said, “For some strange reason I continue to put this adventure together every year. We lose some veterans, but gain some rookies. We maintain a renewed interest in returning to Vermont. We love the Green Mountain State.”

Team Canada is by no means a sporting team, athletically speaking. They are a drinking/partying team. There is no group that makes a bigger mark in town and they do it in a positive way. They go out of their way to see every friend they’ve met over the years and definitely every bartender.

The 30-year facts—Whittier has introduced Killington to 136 Team Canada alumni, 46 children have been born from Team Canada members in Canada and Whittier proudly said, “nothing in the U.S.” Three have passed away and a bus driver. Four K-town friends have passed in Pat Thorsell, Chris Franco, Ian McNeil and Scott Giguere. Part of the crew this year are Peter (1990), Gordo, Brett (93), Kato (96, also his first year driving them), Magic Mike (2001), Greg (04), Arthur (06) and some newer guys Ray, Cookie, Marty, Malcolm RPG (Rolly Polly Goalie) and Mark “5-0” Claussen.

Back in 2001, I remember them coming to the Wobbly Barn and I was looking forward to meeting them. Unfortunately that didn’t happen because their visit was short-lived after Magic Mike attempted his flaming wallet trick. That was the only time they’ve ever been asked to leave a K-town establishment.

The tradition began back in 1990, Peter Whittier was invited on a ski trip by three fellow bartenders and said, “Sure, why not?” They coincide their trip with Jack Daniels weekend. The bond they’ve made with that brand and those brand ambassadors is so great. The annual trip “gives us a chance to get together,” said Whittier. “Some of us have been friends for 25 years but don’t get to see each other that often. So this is a great time for that. It’s three to four days with your friends and no responsibilities. We get to see our K-town friends.”

After what they hope is an uneventful crossing of the border, their first stop will be the Lookout Tavern and then to Moguls for the JD Winter Olympics. Friday 4-5 people will attempt to ski and end their day at Bear and see their old friend Duane Carleton play music and bartenders Heather Grev Livesey and Linda Ross pour them drinks and laugh over stories from the years.

Only people Whittier has ever skied with in Killington are Linda Ross and Jim Plourde. Friday night is the biggest event, Team USA vs Team Canada vs Team Sweden in Minute to Win it games at Moguls Sports Pub. The event run by me, DJ Dave, has been going for three years. Canada has yet to take home the gold. Team USA is the defending champs and also won in 2017. Team Sweden won in 2018. There will be some prizes but there is no bigger prize than pride. They’re excited to have Rick Redington play for them Saturday at the Nite Spot, as he was the first musician they met in town. They became friends in 1993. They’re hoping to fill the place with friends they’ve met over the past 29 years.

As mentioned, most of Team Canada doesn’t ski or even attempt to. Whittier added, “Yes, to most of you that must seem odd, but the friendships made on the bus and with the staff at a few key bars keeps most of the team drinking, while a few of us brave the slopes and make a few turns.

If not playing cards at the Owl House or drinking at some bar, you may see a few Team Canada Vests on the slopes. So, if you see a big tour bus with Canadian Flags on it in a bar parking lot this weekend, come on in, introduce yourself, and say hello. We would love to meet you.”

Whittier keeps coming back to see his extended U.S. Family. He said, “The only reason I come back is because I get to hang with you and see the Sara Filskov’s, the Cookie’s, Samuari, Bobby, Sal and Jason Evans. It’s going on vacation to a ski town but going to see your family who all live and work there. Everybody is so glad to see us. I’m probably the only guy who’s allowed to stand behind the bar at the Lookout and that’s always my spot. If we go to another resort, we’re nobodies. We’ll probably get kicked out for being too rowdy. We have history in Killington and people know who the hell we are. We’re respected, we’re not just a bunch of freaking Canadians. I’m going to say we’ve spent close to a million dollars here over the years.”