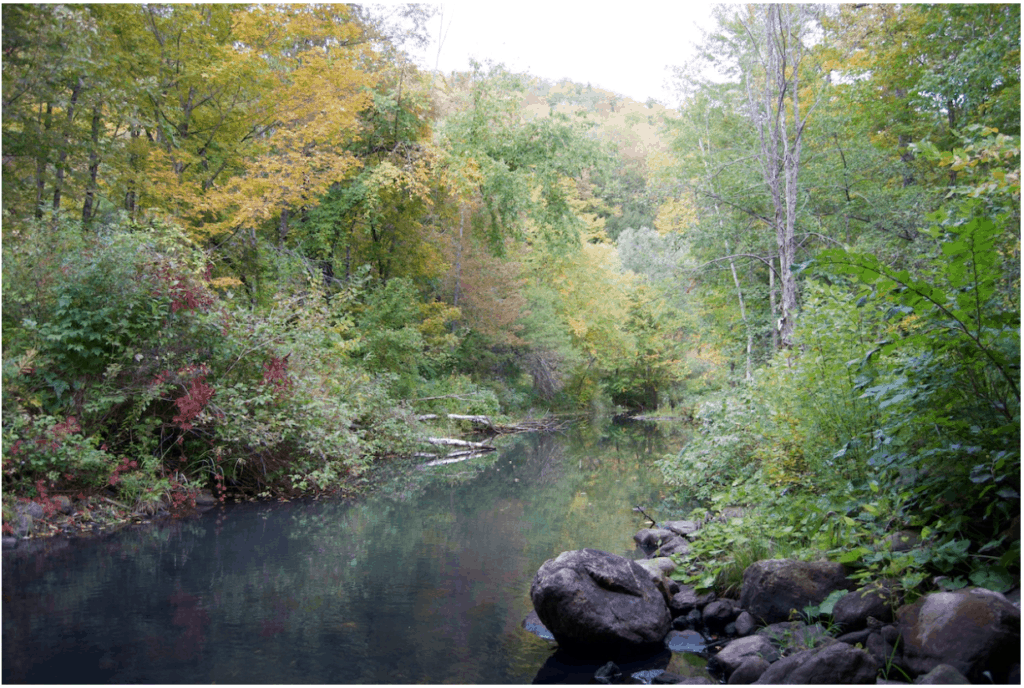 As a river steward for the Connecticut River Conservancy, Kathy Urffer keeps an eye on water-related permits through Vermont. Last year, one caught her eye — to allow the state’s first-ever transfer of water from one river basin to another.

The application came from Killington Resort, which asked the Vermont Agency of Natural Resources for permission to divert water from the Ottauquechee River, which runs along the mountain’s eastern base and eventually empties into the Connecticut River.

The ski resort planned to pump Ottauquechee water to a retention pond at Pico Mountain Resort, and use the water for snowmaking. Pico, which is owned by Killington, is 10 miles across Sherburne Pass from the Ottauquechee River, and water in Pico’s pond eventually drains into Otter Creek on its way to Lake Champlain.
As climate change has brought more guesswork into ski resort operations, many ski mountains in Vermont have fortified their snowmaking operations.

Killington, the “Beast of the East,” boasts one of the most expansive snowmaking systems on the East Coast.

The Killington-Pico plan raised a number of serious questions for Urffer. What if invasive species in the Ottauquechee were pumped into the pond, and then spread into a different watershed? What if drought and lack of spring runoff lowered the water levels in the river? How does the state determine to whom that water belongs?

Urffer realized that the permit application was unprecedented, and that the state’s normal processes would not deal thoroughly with all the implications.

Basin-to-basin water transfers, she reasoned, may become more common in future years, as the vagaries of climate change could affect water supplies for snowmaking, irrigation and brewing, among other uses.

The state granted the permit. Soon, a group with representatives from the Vermont Natural Resources Council, Trout Unlimited and the Connecticut River Conservancy got worried. The group sent a letter to the Agency of Natural Resources, expressing its concerns and requesting policies that would regulate this kind of transfer.

The letter said the agency did “an admirable job” in reviewing the Killington application; “however, it is clear that staff are hampered by the lack of duly adopted policy to guide their review when it comes to interbasin transfer of surface waters.”

The group took its request to state Rep. Mike Mrowicki, D-Putney, who introduced a bill, H.833, in January. Urffer calls the bill “uncontroversial” — it passed in the House last week and now awaits the governor’s signature.

“Uncontroversial” as a study bill may be, the policies that result from the group’s study will regulate more than rare interbasin water transfers.

They will also inform policies that regulate “diversions of surface water in general.” Water diversions are essential for agriculture and snow sports — industries that are pillars of Vermont’s economy, and are already suffering from the effects of a changing climate.

“Those of us who fish are aware that there are pipes in our rivers and streams withdrawing water,” said David Deen, an avid fisherman and president of the Connecticut River Valley chapter of Trout Unlimited, and who is a former state rep. “There’s no permit required. How much of that is going on? Nobody has any idea, because you don’t have to tell anybody.”

“There isn’t a permit in Vermont specifically for water withdrawals,” he said.

Instead, when he receives a water diversion application, he uses a cross-section of other legislation to determine the best course of action.

Crocker said stream flow affects a domino of other variables within the ecosystem.

“Stream flow is considered the master variable of what creates the environment that aquatic biota are evolved to live in,” he said.

With water levels around the state already low this summer, additional water withdrawals may stress fish, Deen said. Water tends to get warmer when levels are low, and oxygen levels diminish in warm water.

“Sometimes you’ll be on a bigger river, and there will be a little tributary coming in with cold water, which holds oxygen,” Deen said. “There’ll be fish all bunched up right where that tributary comes in.”

That phenomenon signals to Deen that fish are struggling.

This summer, farmers relied heavily on irrigation, which comes either from groundwater, through wells, or draws from surface water.

The vast majority of fruit and vegetable farmers are relying heavily on irrigation this year, said Joshua Faulkner, farming and climate change program coordinator at the University of Vermont’s Extension program.

“It’s getting wetter in the Northeast,” Faulkner said, “but really, the patterns of rainfall are changing so that during the summer, we’re seeing more and more drought periods. Irrigation is becoming increasingly critical.”

Grey Hagwood, Vermont Council president for Trout Unlimited, said he’s “never been one to get on the global warming bandwagon. But I think it’s pretty obvious if we look at the last 10 years — climate change is occurring,” he said. “One of the first things that we need to do is just take inventory of what we have and how it’s being used … so that it’s not just taken advantage of by specific groups that have the greatest access to it.”

Who will propose the rules?

Because of the numerous stakeholders looking to tap into the state’s surface waters, creating legislation that meets everyone’s needs — and considers a climate that’s wet some years and dry in others — will be a challenge.

Asim Zia, public policy professor at UVM, has studied water rights issues in river basins around the world and recently received a Fulbright Global Scholar Award to identify solutions so that 237 million people who obtain drinking water from the Indus, Jordan and Amazon basins have fair access.

Zia referred to data that show that Vermont’s precipitation levels have increased over a period of decades, but acknowledged that unpredictable weather patterns are likely, including droughts.

“It’s not a water scarcity crisis,” he said, and during wet years, policy should ensure that water extraction doesn’t cause runoff that would reduce water quality.

Most important, he said, is that the process for proposing the policy is transparent and includes members from stakeholder groups.

Representatives from industries that rely on large quantities of surface water and nonprofit environmental advocacy groups will also be part of the group, along with a hydrologist and a person who works in agriculture.

“The best thing is to engage these different stakeholders,” Zia said. “Those people who would be on the losing side of these policies, how would they be compensated for the losses? We don’t want to increase existing inequities.”

Lots of good news in this week’s paper including

Local Rutland races are highly contested this year. What would you like to know about the candidates to help you decide? #vtpoli ... See MoreSee Less

Civic engagement, service on the rise - The Mountain Times

Lots of good news in this week’s paper including: the mittens that spawned a million memes, @philscottvt delivers Vermont’s budget (and there’s more money than we thought!) a cross between snowboarding and golf @darksidevt, results from the Woodstock flurry, the Rutland mayoral race heats up, and all the things you’ve come to know and love- puzzles, horoscopes, classifieds and so much more. Grab your free copy before they disappear! #localnews #mountaintimesvt #bernie #berniememes #darkpark #skolf #miniskolf #rutland #killington #vermont ... See MoreSee Less

Everything about this makes us happy. ... See MoreSee Less