KILLINGTON—With 151 total property sales, “2017 was a record-breaking year for real estate sales in Killington, surpassing the number of sales at the peak of the market in 2006,” reported Kyle Kershner, broker/owner of Killington Pico Realty. The year 2006 saw 139 total sales, including all types of properties from land to condos.

Asked if activity continues to be strong thus far this spring, Kershner said, “This has been a busy winter, and I don’t see any signs of things slowing down.” 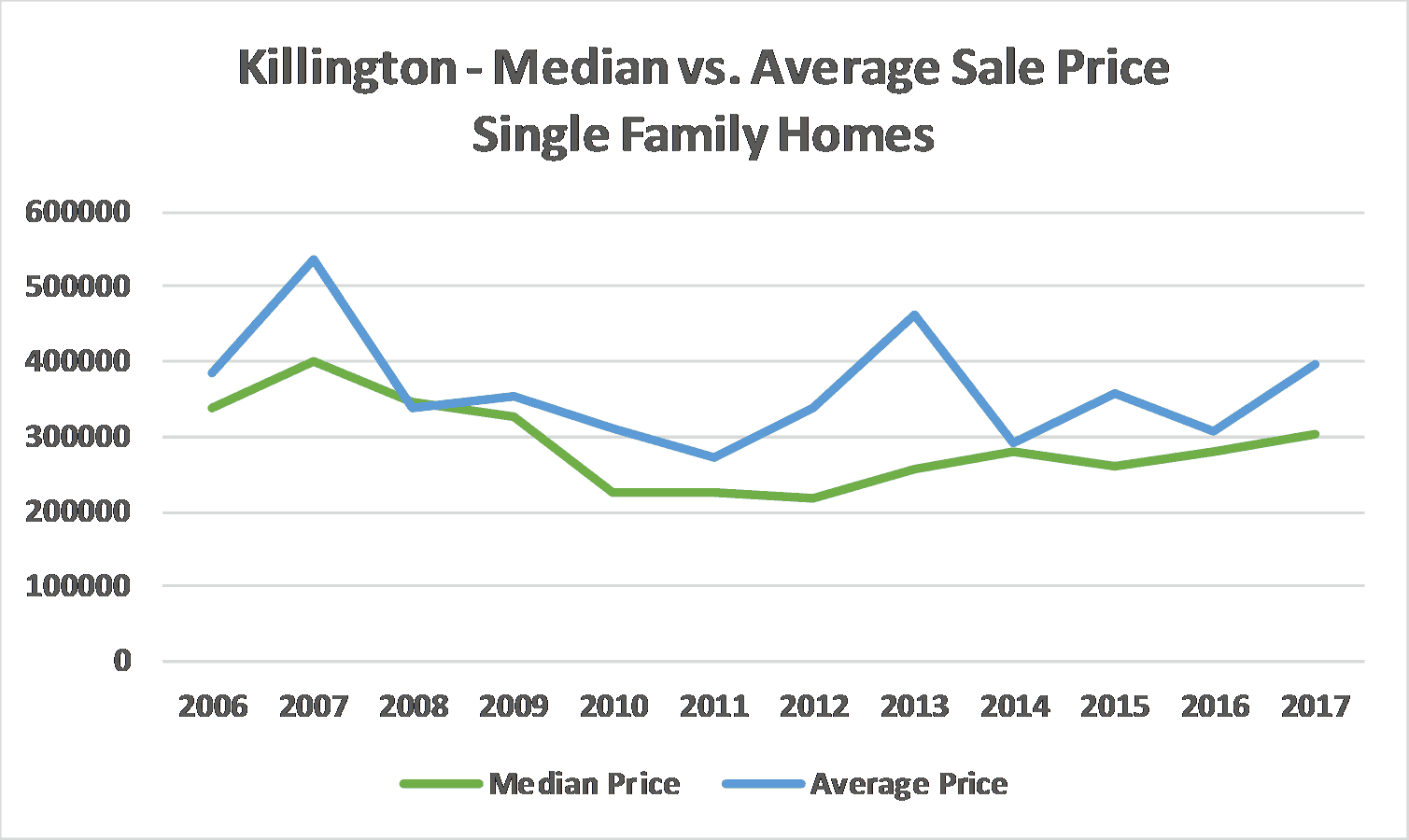 He noted that in the first three months of 2018, there have been nine single-family home sales. “Last year in that same first quarter there were five so we might be seeing more interest now that Killington Resort has ramped up summer and invested in year round activities. With the year-round season pass, we might even see more interest in the remainder of this year,” he said, noting “a host of positive trends. Killington is investing $16 million in winter and summer improvements this year and introducing a year-round season pass good for all the activities offered, causing me to be optimistic that the market will continue to do well.”

Currently, there is an inventory of 36 homes for sale versus over 50 a year ago.

“Median sales prices for homes in 2017 were up 9 percent over 2016. For several years we’ve been seeing more sales year over year, but it hadn’t turned into appreciation – median sales prices remained flat but 2017 was the first time we saw a jump,” Kershner noted.

“Inventory had been staying high with people listing as fast as we were selling, but now with inventory coming down we may see more appreciation,” he added. “In Dec. 2016 there was a 23 months’ supply of single-family home inventory and in one year the supply has dropped by a half,” he said.

Condominium sales have also been going up year over year, but prices have remained reasonable compared to some other ski markets, and the good values people were seeing in Killington may help explain the sales increases, Kershner noted. 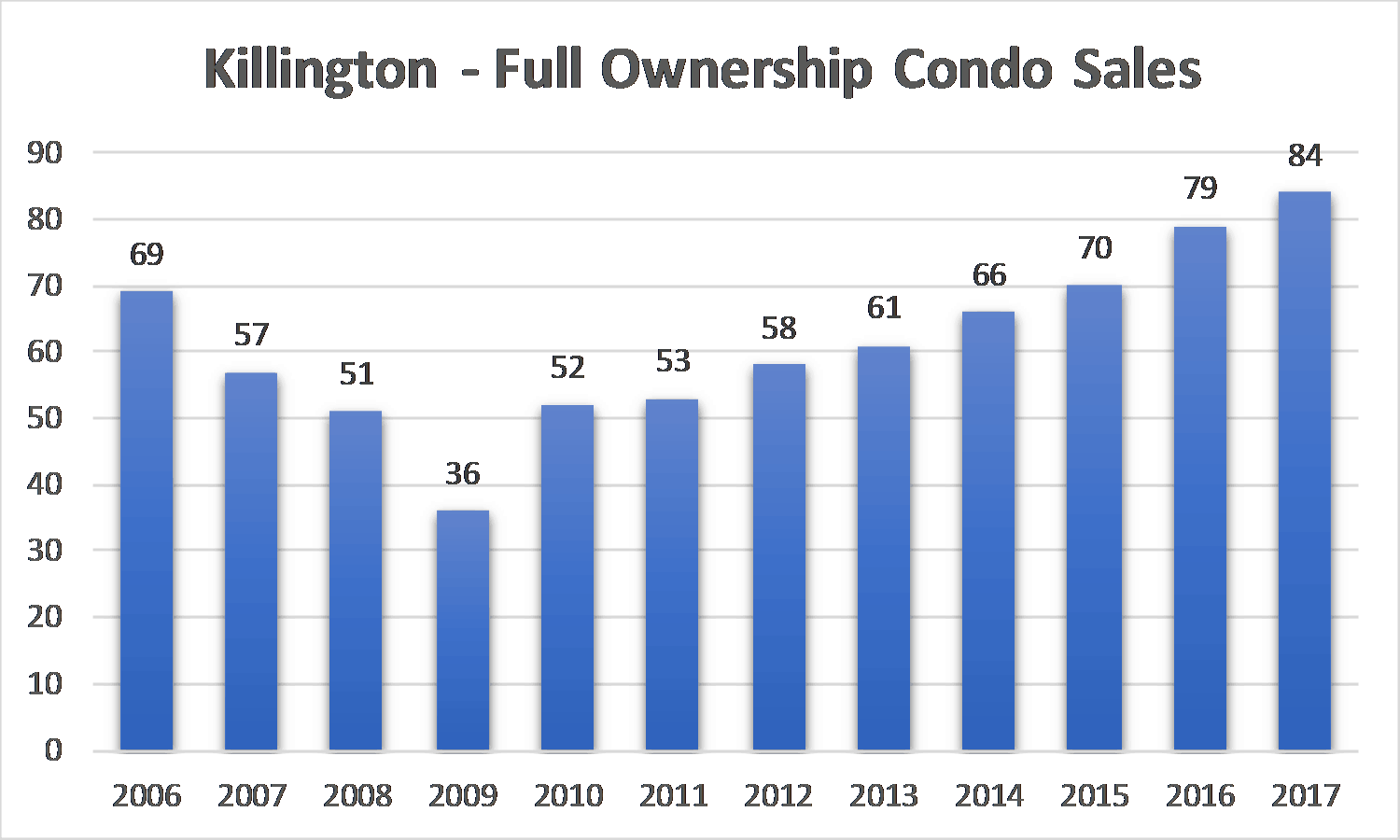 In the past 12 months there have been 84 condo sales, and currently there is an eight-month supply of condos on the market, with 56 available.

“We’re no longer in a buyer’s market, but we’re not quite into a seller’s market. We are transitioning out of the buyer’s market and into a more balanced market,” Kershner said.

With inventory down, Kershner expects to see price improvements in both condo and single-family home sales, attributing it to “supply and demand in action.”

Other trends are positive, too, he noted.

By way of example, he said that at the November 2017 annual meeting of unit owners (at the Killington Grand Hotel), the president of the Killington Grand Hotel & Crown Club Owner’s Association stated that gross rental revenue has risen 47 percent since 2009 and 9 percent since 2016. Room nights are also growing at the Grand Resort: 28,482 in 2013 and 38,299 expected in 2018, making it the second busiest hotel in Vermont, behind Stoweflake in Stowe. 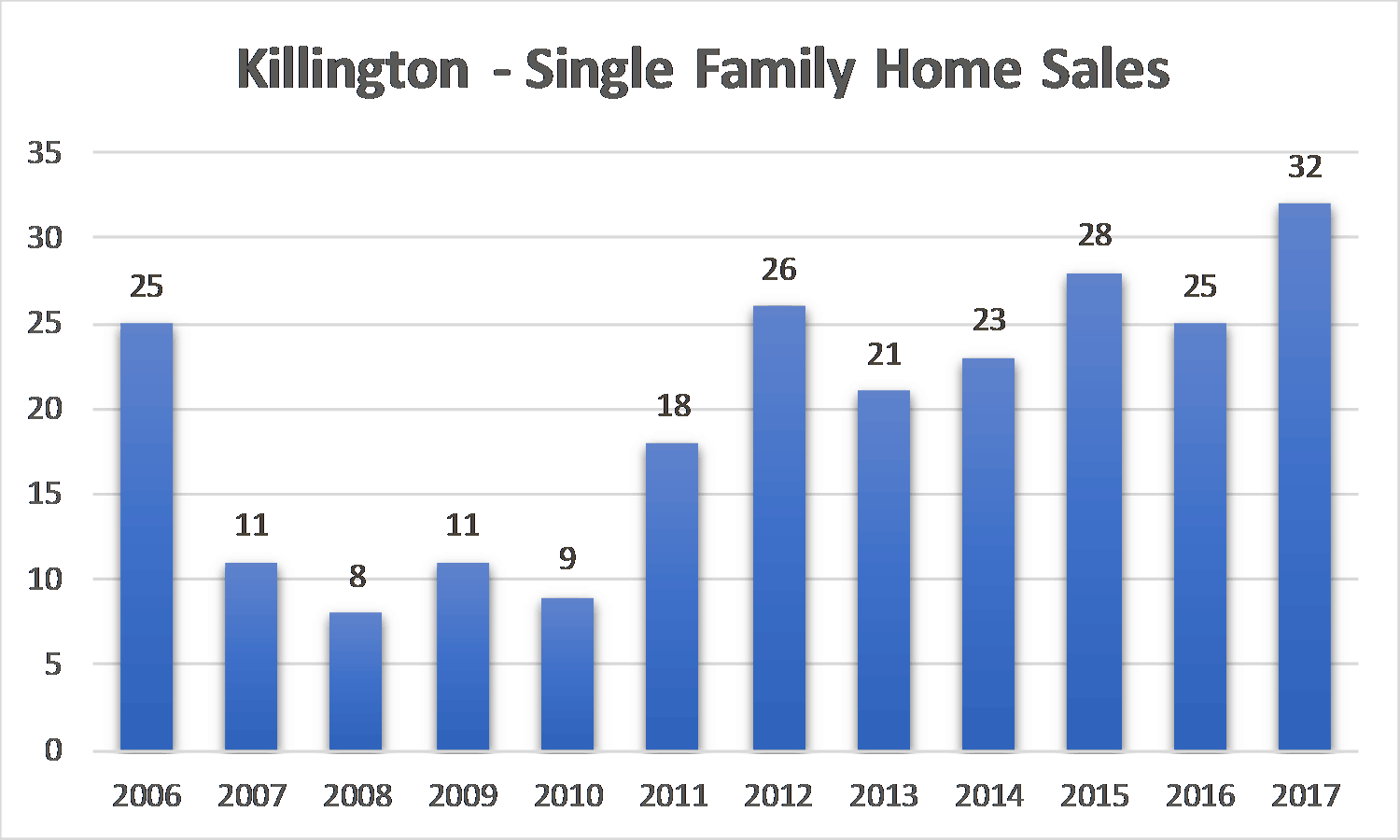 Kershner added that “two years ago hotel studio quarter shares were going for $13,000 to $15,000; now the lowest listing is $19,600.” He attributes the increases to more summer activities, the new Adventure Center, and an increase in weddings at the hotel.

“Winter is the second-best busiest time of year with mid-summer into fall typically seeing the most serious buyers and consequently busiest with the most transactions occurring September through November,” Kershner noted.

He added, “There were 10 home sales over $1 million since 2007 and three of those sales occurred in the last 12 months, with eight currently for sale. That’s a noticeable uptick in the higher-end luxury market and another positive sign for the market.”