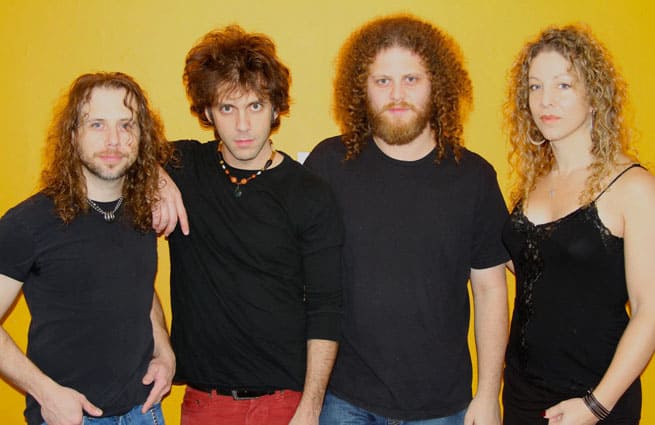 If you like Pink Floyd, then head to the Pickle Barrel on Thursday night to see the next best thing to Floyd: The Machine. I have seen The Machine numerous times and they put on a great show. If you close your eyes, you would swear you were listening to Floyd, and when you open them you see an incredible light show to accompany the great sound. The Machine is the premier Pink Floyd tribute band and has been around for 27 years. The Machine is made up of Tahrah Cohen, the founder and drummer; Ryan Ball, 15-year veteran and guitarist; Scott Chasolen, 7-year keyboardist and; Adam Minkoff, who recently joined the group and is the lead vocalist and bass player.

I got a chance to speak with Tahrah Cohen who filled me in on some history about the band. Their first gig was in 1988, playing at a Cheers restaurant in Nyack, N.Y. “There was nobody playing Floyd’s music and we all loved it and it all started very naturally and organically,” she said.

Since then the band has forged a reputation of excellence, extending the legacy of Pink Floyd, while creating another legacy of their own. Over the years, The Machine has sold out many theaters, large clubs and casinos across North and Central America, Europe and Asia. They have also appeared at renowned music festivals such as Bonnaroo, Riverbend, Gathering of the Vibes, Buffalo’s Artpark, and Germany’s Rock of Ages.

When asked about her experience playing in Killington, Cohen said, “We do enjoy playing in Vermont. It’s a real specific crowd type and it’s always nice to come back.”

Cohen, who’s been playing the drums for 30 years now, and the band are currenly on tour across New England before they head down South and out West.

Tahrah Cohen likes a wide variety of music in addition to Floyd, including jazz guitar player Bill Frisell and the rock ‘n’ roll of PJ Harvey. Her favorite Pink Floyd song is “Shine of you Crazy Diamond.”

The Machine never play the same show twice, focusing on making every show an authentic “Floydian” experience for their fans.

“We’re not rooted into playing the same set list for the whole tour like other bands,” Cohen said. “We do whatever we want and we give you a very diverse and unique show.”

Also unique, The Machine, encourages fans to tape their shows much to the delight of their fans. The Machine is also known for recreating entire albums as a part of their show, accepting requests from fans, and for taking an A to Z approach in which one song is played for every letter of the alphabet.

Additionally, the quartet has been sharing the stage with full symphony orchestras, including the Atlanta, Detroit, Pittsburgh and San Diego symphonies. Coming up on May 1, they’ll be performing in New Haven, Conn., with the Hartford Symphony Orchestra for a show that will include the entirety of the Dark Side of the Moon. They’ve gotten some great reviews over the years including one from Matt Diehl of Rolling Stone Magazine who writes, “The Machine duplicates the sound and hits of Pink Floyd with chilling accuracy.” Guitar One Magazine says, “You know you’ve got it going on when you sell out B.B. King’s in New York City and Roger Waters’ sax player jams with you!” Bob Ezrin who was the co-producer of Pink Floyd’s The Wall even says, “These guys are great!”

Tahrah Cohen, however, does it for the pure joy of music. “Playing music in front of people and having that experience on a consistent basis is one of the best things you can do in your life. I get to perform and express myself as a musician and get to connect with people, make them feel good and give them a break from their life. It’s a gift that I value and appreciate every time I take the stage. I’m really lucky that’s what I’m able to do with myself.”