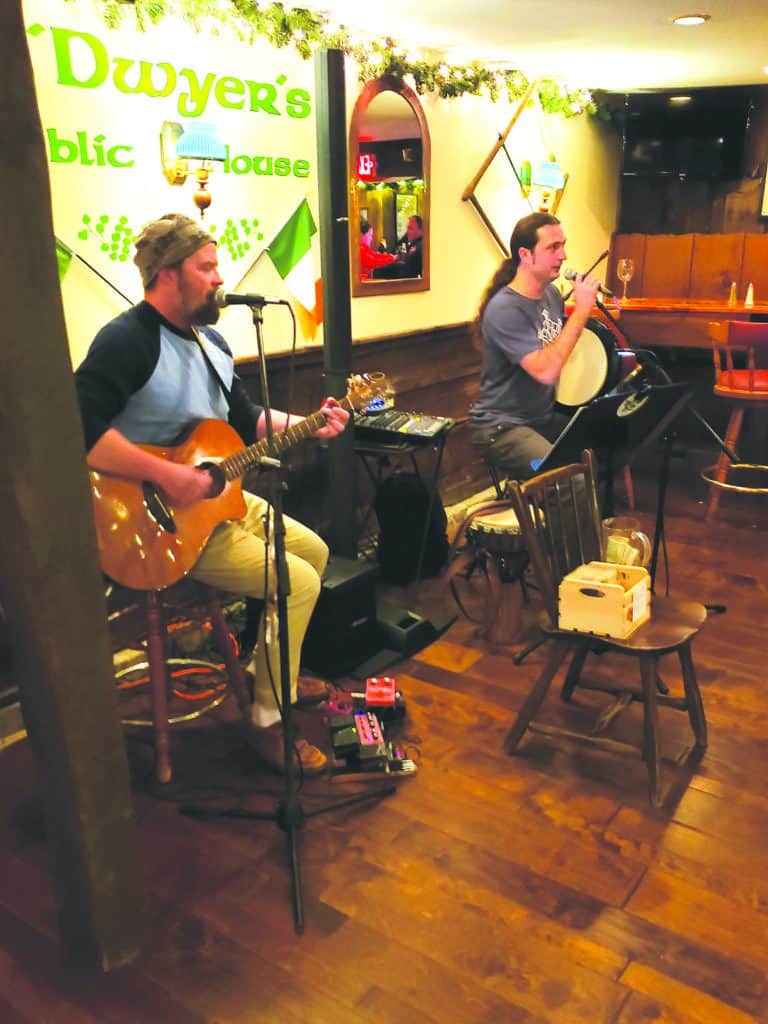 This weekend is the 4th Annual Killington Irish Festival at the Summit Lodge. The headlining band is The County Down (TCD) and for this article, I’m featuring Reagh Greenleaf Jr. (vocals, bodhrán, percussion) of the band. He said, “I’ve happy to have been a part of it every year.” Besides playing music, he’ll have a shop set up with his Celtic art and t-shirts for sale. For a living he splits his music and his original artwork 50/50. Check out rambletree.net for his cool stuff.

Daniel Brown (vocals, guitar, harmonica, banjo) is the other half of The County Down and they’ll have some special guests sit in like Chris LaPointe from Loose Monkeys. Fiddle Witch is playing, too.

Greenleaf said, “We’ve all played together in various combinations so we’ll trade sets and do big jam sets. They’re a little more bluegrass/country folk and we’re more Irish/jam rock so we’re going to mash it all up throughout the weekend.”

TCD plays classic Irish pub music and ballads. They play The Dubliners, Pogues,Van Morrison, Clancy Brothers and Tommy Makem with the latter being Greenleaf’s biggest musical influence and “personal hero.” Greenleaf added, “I’m privileged to have known him and gone to Ireland with him.”

They add stuff like Bob Marley, Grateful Dead and Paul Simon. He said, “It’s a happy fusion of both those worlds.”

Greenleaf and Brown have been playing together for six years after meeting on craigslist.

Greenleaf said, “I was looking for something like a duo or a trio because I wanted to get out there more and play. Dan and I connected and hit it off pretty well.” They started an Irish Night in March 2014 at Taps Tavern in Poultney. Brown hooked up with the Summit a few years back, playing every Friday night solo in the winter and brought in Greenleaf for Saturdays.

Greenleaf comes from the Boston/Rhode Island Irish music scene, which is huge. He made a living as a full-time musician before he moved to Vermont. It took him a bit to break into the scene here and then he met famed Celtic group Gypsy Reel, whom he still plays with today.

County Down is a county in Northern Ireland. Greenleaf said, “When I went to Ireland in 2000 with the Makems, we were staying in County Down. I always think about that trip and how it shaped my life so I chose that as a band name and I thought it sounded kinda cool.”

Greenleaf, 42, grew up in Merrimack, New Hampshire, and graduated from UNH. He said, “Music didn’t really become a thing for me until I was an adult. As a teenager I was into renaissance fairs and was fascinated by period music plus I was more of a metalhead. I was into Iron Maiden and Black Sabbath. I didn’t get into folk music until I was in college.”

Tommy Makem lived in Dover and performed with his three sons at UNH frequently. Greenleaf added, “I went to see them on a whim and was blown away. The three brothers did a song, all playing the bodhrán. So it was three drums and three voices and I was like, that’s for me.”

Greenleaf bought a drum and started hanging out at all the traditional sessions in the pubs in Portsmouth, Dover and Boston. He said, “I just absorbed it. My first singing experiences were trying to belt out songs in the corner of the pub over a noisy room. I didn’t touch a microphone until I’ve been singing for five years. That was cool to come at it from that angle.” His first professional gig was with Aaron Clegg at the Peterborough, New Hampshire, library. Greenleaf laughingly said, “It was probably 20 minutes and we made $50 each, but it was pretty cool.”

From 2005-2009, Greenleaf bounced around the country working at renaissance festivals selling jewelry. That allowed him to perform with various musicians and sit in the drumming circles at the camp fires. He came back to New England and hooked up with Tom Lanigan, an Irish singer/songwriter from Dublin. Their band performed all over New England and played on the main stage at the Boston Irish Festival. Greenleaf said, “He’s the guy who really opened it up for me and gave me the opportunity to be playing four to five nights per week. I learned a lot of my stage persona from him. He had an authentic approach to the music being from Ireland.”

It’s because of him that Greenleaf ended up in Vermont. The band played at McGrath’s Irish Pub in Killington a couple times. “In 2010, I met bartender Owen Murphy and then Owen’s sister Megan. Now I live in Vermont, have two kids and we’re married. All because of Irish music,” he said.

Greenleaf loves to spread the fun of Irish music. He said, “That’s really what it’s all about. I do a lot of music that’s not so traditional but I also do a lot of it that is traditional. I try to capture the spirit of that and share it with other people. Irish music has this inherent quality about it that’s humorous but there’s also a lot of love and longing for Ireland. I think everyone has that longing in their life, whether it’s for a place or a time in their lives. That’s universal and I really like connecting with that.”