By Sawyer Loftus and Elizabeth Hewitt/VTDigger

The project had been in the works for just under a week and was a collaboration between Noel Riby-Williams, a Montpelier resident, and City Councilor Conor Casey. The week prior, Riby-Williams helped to organize a 5,000-person protest against police brutality in Montpelier.

The painting, which replicates one recently done in front of the White House in Washington, D.C., was broadly supported within the Montpelier community, and had the backing of Gov. Phil Scott.

“I don’t want this to be just a moment in time,” Scott said about the project on Friday. “I want this to be a time when there’s transition to real action, and we have to be reminded of that. And I think this is an expression of sentiment.”

“It’s just pure joy,” said Riby-Williams as she watched a crowd of volunteers take turns painting. “My family is here with me and this is a community event. As a community putting out this statement — I’m just so thankful and grateful.”

In all, the painting took about three hours, between stenciling out the letters and then community members filling them in, one stroke at a time. But with hundreds of hands, the task went by quickly.

Once the painting was finished, volunteers and community members stood together on the road, facing the State House in a moment of silence.

However, spirits were dampened just a day later, when vandalism was reported on the new “Black Lives Matter” mural on the road in front of the State House.

Motor oil and mud was smeared over part of the mural, according to Montpelier Police Cpl. Michael Philbrick, and graffiti was painted on the adjacent paving stones leading to the Statehouse.

The graffiti in red and white paint includes the statements “$400 million gone,” and “put it back call Trump,” as well as profanity. In a statement, police said the messages appeared focused on government spending, and “did not appear to reference the ‘Black Lives Matter’ community mural project nearby.”

It did not appear the mural was damaged, Philbrick said. Small pools of motor oil were on the mural, which were spread by passing vehicles, he said. According to the press release, mud and dirt was smeared across one letter of the mural.

City Councilor Conor Casey said he’s been at the mural all morning working to clean up the space, along with some state employees and the fire department.

“Waking up this morning was like a punch in the gut after a great day with the community yesterday,” Casey said. “It’s a shame that you have [nearly] 300 people coming together to paint this and in just a short period of time, a few cowards can come and deface it.”

Casey said the vandalism is a clear example of racism in Vermont that often goes unaddressed.

“If people think racism doesn’t exist in Vermont, this should shine a spotlight on it,” Casey said. “Clearly, the people who did this are despicable cowards who came here and did it in the middle of the night. But I think people will be out here with a brush every day to repaint.”

Outgoing Montpelier Police Chief Tony Facos said his department is leading the investigation, and they haven’t ruled out the possibility of a hate crime, but more information would be needed.

“It’s a little discouraging,” Facos said. “I look at this more as an attack on our community and what we’re trying to do as we work together to come up with a better Montpelier, a better state and ultimately a better nation.”

Capitol Police Chief Matt Romei said, “I don’t even know how many people it took to do what they did last night, but it’s disrespectful to the intent of the community effort and it’s environmentally damaging.” 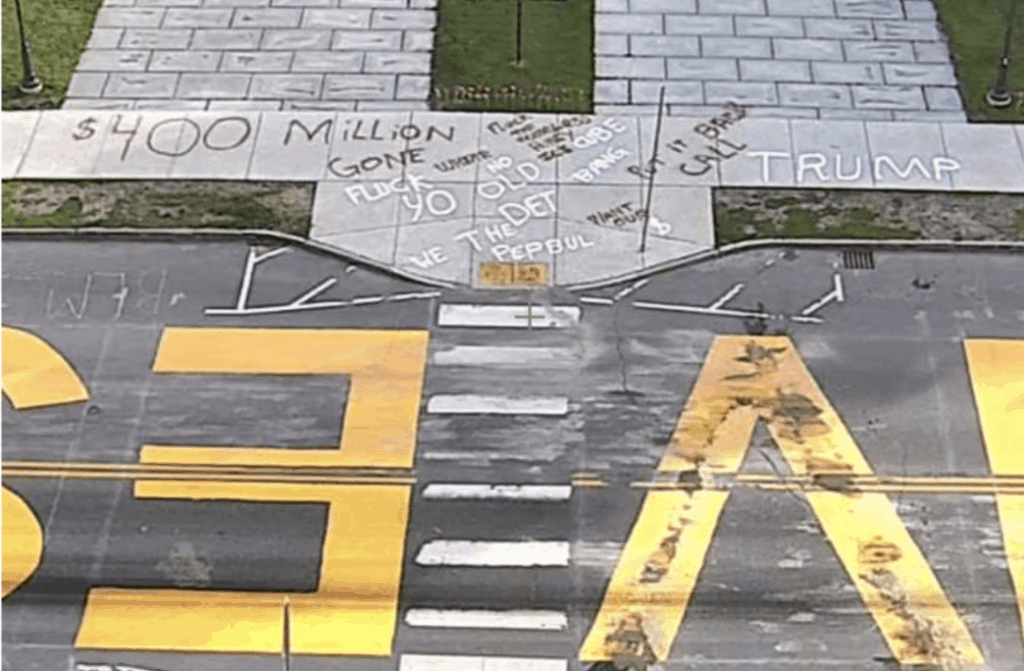 Montpelier police Cpl. Philbrick said the city police department is working with the Capitol Police, Vermont State Security and the Vermont State Police. Each agency has access to different buildings, and their security camera footage, in the capitol complex, he said. Police will be looking for information in camera footage, including any vehicles that might have been involved, he said.

By midday Sunday, police had released images from security camera footage, seeking assistance to identify a possible suspect videoed “in the act” of the vandalism. Police say, according to eyewitness accounts, the individual is a white male, around 50 years old, about 5 feet, 8 inches tall, with scruffy facial hair.

Police are asking anyone with information about the vandalism to contact the department at 802-223-3445.

In a statement to the media, Gov. Phil Scott condemned the vandalism and said he had instructed both the Vermont State Police and the Department of Buildings and General Services to assist Montpelier police in their investigation.

“Early this morning, in an effort to fuel hate and division, the Black Lives Matter painting in front of the State House was vandalized. This painting serves as an important reminder to make equity a priority and use this movement to drive real action and long-overdue change,” Scott stated. “This act of vandalism only reinforces that we’re not immune to racism, divisiveness and hate in Vermont. We must redouble our efforts to dismantle systemic racism and bigotry, and stay united as Vermonters.”

In a statement Sunday morning, House Speaker Mitzi Johnson thanked the organizers behind the mural. She called for Vermonters to recognize systemic racism and “right the centuries of wrong.”

“While it is easy to be disgusted and angered by the vandalism of these anonymous cowards, for me their actions reinforce the need to address head-on the racism and white supremacy right here in our communities,” Johnson said. “That racism takes the form of subtle, perhaps unintended acts of bias, individual acts of hatred in the form of violence or vandalism, and systemic racism that, since the founding of our country and state, have stacked the very rules and expectations of our society against Black, Indigenous and People of Color.”