Featuring headliners Magic! and Paul Oakenfold
Saturday, March 11, 3:30 p.m.—LUDLOW—While sugar makers all over Vermont will be tapping maple trees and collecting sap for making maple syrup, Okemo Mountain Resort will be tapping into the sweet sounds of Sugar Daze, a live outdoor concert. The free musical performance Saturday, March 11, will feature one of the biggest deejays in the world—Paul Oakenfold—and the popular reggae/fusion band, Magic!
A local deejay and warm-up act will take the stage starting at 3:30 p.m. Magic! will dazzle the crowd with its catchy fusion of reggae, pop and R&B, starting at 5:45 p.m. Then, at 7:15 p.m., two-time Grammy and World Music Award nominee Paul Oakenfold will perform.
Magic!, a Canadian reggae fusion band based in Toronto, Canada, has two studio albums, “Don’t Kill the Magic,” released in 2014, and “Primary Colors,” released in 2016. They are most prominently known for their single ,“Rude,” which charted at number one in several countries worldwide. The band has won two Juno Awards and has been nominated for American Music Awards, Billboard Music Awards, Teen Choice Awards, and MuchMusic Video Awards.
Paul Oakenfold is an English deejay and record producer. He has been voted the number one deejay in the world twice by DJ Magazine and has provided over 100 remixes for artists including U2, Moby, Madonna, Massive Attack, New Order, The Rolling Stones, The Stone Roses and more.
Okemo’s Jackson Gore courtyard will transform into a concert venue with a beer garden and food offerings. Admission to the concert is free and Okemo will make available a limited number of $50 VIP passes that include concert credentials, access to a stage viewing area, hospitality tent, snacks and three drink tickets per person. Visit okemo.com or call 802-228-1600. 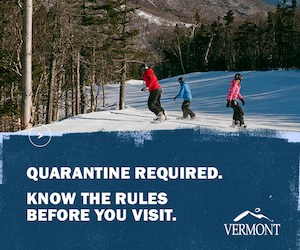 It’s Wednesday and that means a new issue of the

From a frosty morning like this to the warmest tem

30 scenes of snow - The Mountain Times

Rutland artist Carrie Pill creates original paintings daily as part of self-imposed #Snowvember challenge By Brooke Geery As of the end of November, Carrie Pill has created a new piece of art every da...
View on Facebook
·Share

It’s Wednesday and that means a new issue of the paper! Inside this week- a plea from @philscottvt to help #vermontlightstheway, @carriepillart’s #snowvember challenge, plus COVID updates and several events to get you in the Christmas spirit! Pick up a free copy or read it online now.

🚨PLEASE SHARE🚨
Attention local businesses and community members. We received a call today asking for a donation in the amount of $189 for a Rutland High School wrestling poster ad. I have confirmed with the Athletic Department that this is not legitimate, no association with the school, and a SCAM.

There is no wrestling this year in Vermont.
I received the same call last year.

We have very thoughtful and supportive community members and I wanted to share proactively to protect your personal information. ... See MoreSee Less