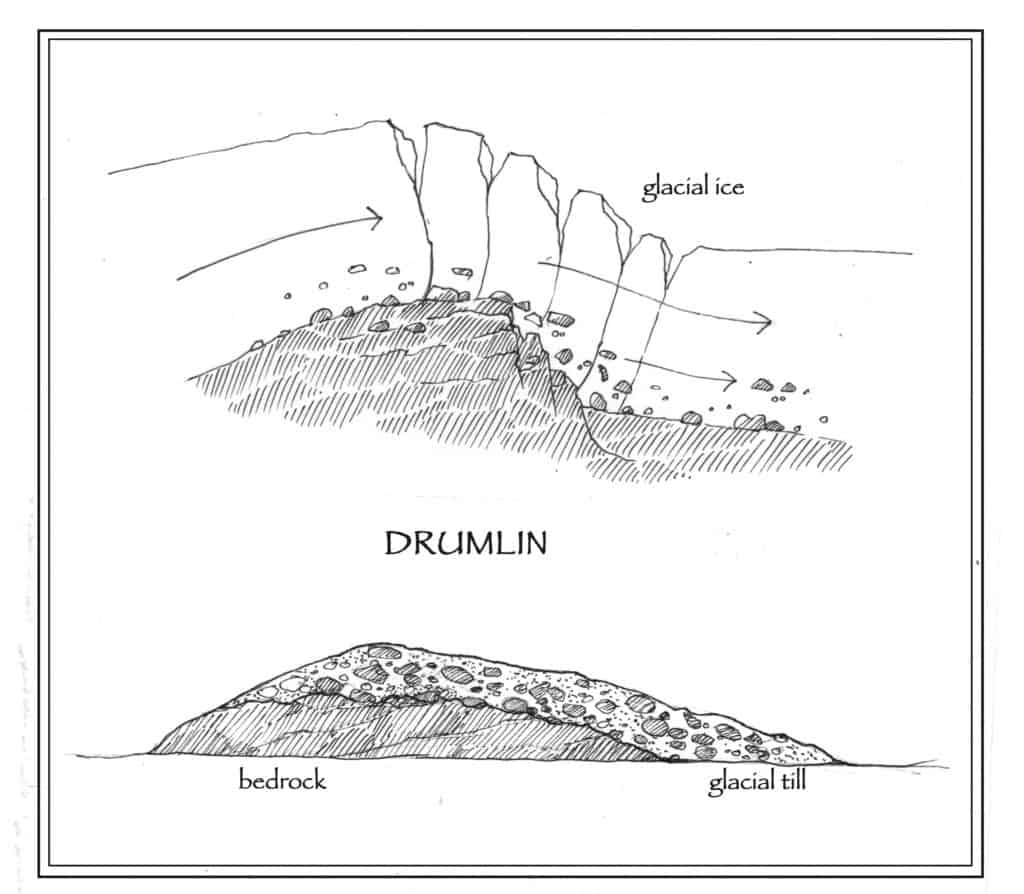 There’s a story about an early tourist from New York City who stopped his horse and buggy to watch a farmer harvesting a spring crop of rocks from his land. The farmer was loading rocks onto a sledge drawn by oxen. The stranger called him over and asked, “Where did all those rocks come from?”

“They tell me they were dropped here by the glacier,” replied the farmer.

“I don’t see any glacier,” the stranger observed.

“Nope,” said the farmer. “It went back for another load.”

As the farmer noted, our most recent ice age wasn’t a one-time event. The cycle of glacial advances and retreats occurs over the course of approximately 100,000 years. During the height of the most recent Wisconsinan glaciation, what is now the northeastern U.S. was blanketed by the Laurentide ice sheet for some 30,000 years. Then, about 17,000 years ago, the ice sheet started to melt faster than it advanced. Receding at an average rate of 245 feet each year, the ice took 4,300 years to melt back from Middletown, Connecticut, to St. Johnsbury, Vermont. Five centuries passed while the leading edge shifted from Concord to Franklin, New Hampshire, which means the glacier covered that 20 miles at the speed of four miles every 100 years.

As they move, glaciers pick up and deposit rocks and soil. I think of them as earth potters, whose icy fingers mold the surface of the land with seemingly no limit to the volume of earth and the size of rocks they can carry. Even thousands of years after the last ice age, glacially deposited stones are among northern New England’s most abundant crops: every winter, the frozen soil expands and pushes rocks to the surface, where melting snow reveals another harvest. On a larger scale, we’re surrounded by glacial landforms that we barely notice as we go about our daily lives. These include drumlins and glacial erratics.

Drumlins are gently rounded hills in the form of giant, inverted spoons. They were created when ice deposited a jumbled layer of clay, sand, gravel and rock called till. Drumlins contain a high proportion of clay and are often no more than three-quarters of a mile long and half a mile wide. If you look at a drumlin’s long axis, you can see the direction the glacier was traveling.

A few thousand drumlins dot the landscape of southern New Hampshire, from Peterborough to Pinardville and Canterbury to Kensington. You can observe a drumlin while eating a drumstick at Kimball Farm in Jaffrey by looking north at the elongated, gently-sloping hill across Route 124.

Many drumlins, like much of the post-glacial landscape, are littered with countless rocks, 90 percent of them dropped within a mile of where the glacier picked them up. Robert Frost didn’t exactly say, “Good piles of glacial boulders make good neighbors,” but that, technically, was his allusion, and early farmers used these boulders to make the stone fences still prevalent in the region.

Few glacial landforms are more intriguing than glacial erratics – boulders picked up by the ice and dropped far from their source atop bedrock that is different than that from which they came. Many of the coarse, pink granite boulders fashioned into stone walls in Plainfield, New Hampshire, originated from a distinctive bedrock located some 20 miles north in Lebanon. Glacial ice also transported boulders from nearby Mt. Ascutney, scattering them throughout southeastern Vermont, southwestern New Hampshire, and beyond.

Elephant Rock in Newport, New Hampshire, measures 20 feet tall and 30 feet long. The Green Mountain Giant in west Whitingham, Vermont, is 40 feet long, 32 feet high, and weighs some 3,400 tons. Even bigger is the famous Madison Boulder in Madison, New Hampshire, considered the largest glacial erratic in the United States. This 83-foot-long behemoth weighs approximately 4,662 tons. The glacier moved it from a ledge located about two miles north and west in the town of Albany.

The evidence of our ever-shifting landscape surrounds us, recorded in the hills, and etched in stone. Drumlins and erratics are just two of the fascinating glacial artifacts that we can observe while we wait for the ice sheet to come back with another load.

Michael J. Caduto is an author, ecologist, and storyteller who lives in Reading, Vermont. The illustration for this column was drawn by Adelaide Tyrol. The Outside Story is assigned and edited by Northern Woodlands magazine and sponsored by the Wellborn Ecology Fund of New Hampshire Charitable Foundation: nhcf.org.