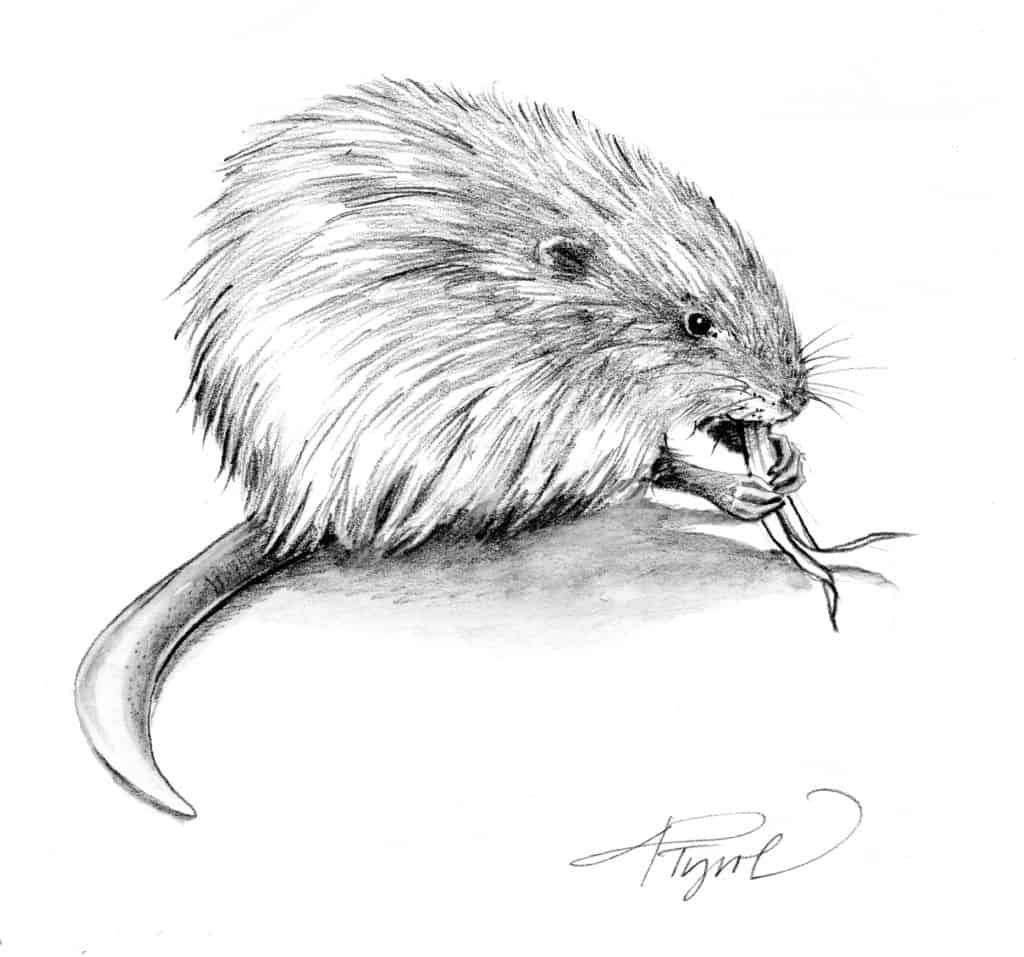 We were touring the neighborhood backroads one summer evening when the kids noticed a sleek movement through a small pond. At first, we thought it was a beaver, but its smaller size and – once we got a closer look – slender tail revealed this swimmer as a muskrat. It went along its way, and we went along ours, happy to have spotted this wetlands rodent.

Muskrats live in marshes and around ponds and slow-moving streams throughout most of North America. The origin of the name “muskrat” is attributed to various sources. Yes, muskrats, like many other animals, use scent – or “musk” – to communicate such things as territorial boundaries and readiness to mate. But there is also a possible connection to native languages, including an Algonquin word for red: miskwà. Indeed, muskrats often have a rusty color to their fur.

Despite their rodent classification and their long tails, the muskrat (Ondatra zibethica) is not particularly rat-like. In fact, said Kim Royar, a biologist with Vermont Fish and Wildlife, muskrats are not closely related to rats, but are close cousins to voles and lemmings. Regardless of where they got their name, muskrats play some important ecological roles, including improving water habitat for other animals — and serving as dinner for a range of predators, large and small.

“It’s a ubiquitous prey species. Just about anything that can get access to a muskrat will eat it,” Royar said. That includes mink, raccoons, coyotes, foxes, and otters, as well as winged predators such as owls and harriers. Even snapping turtles, pike, and bullfrogs will nosh on these semi-aquatic rodents.

“Muskrats are less than an ounce when they’re born,” Royar said. “Those tiny babies are probably a tasty morsel for a bullfrog. It’s a tough world.”

Like many heavily predated animals, muskrats compensate through prolific breeding. In our region, a female muskrat will have two to three litters in a summer, each with around six young. Born blind and nearly furless, muskrat kits are relatively helpless, but they grow quickly.

Within a couple of weeks, kits are able to swim and start eating vegetation. Within a month, the young muskrats are on their own – and mother muskrat is soon raising the season’s next litter. An adult muskrat may weigh up to 4 pounds and measure as long as 2 feet, with the tail accounting for nearly half of that length.

Muskrats are adept swimmers and can swim both forward and backward. Their long tails are laterally flattened and serve as rudders, and they use partially webbed back feet to propel themselves smoothly through the water. They can swim underwater and may stay submerged for up to 20 minutes.

Depending on available habitat, muskrats either use their long-clawed feet to dig burrows into stream banks, or employ plant materials to build houses that emerge from ponds and marshes, and they often live communally. Houses are constructed in shallow water – anywhere from 6 inches to a few feet deep – generally in a conical shape up to 4 feet high and 8 to 10 feet in diameter where house meets water.

A typical muskrat burrow or house includes multiple chambers connected by a series of tunnels, which are accessed through underwater entrances. Muskrats also build canals, which they use to travel from home to deeper water. Sometimes they’ll utilize both burrows and houses, or switch seasonally from one to the other.

“Some research suggests that if a group of muskrats occupies a lodge in winter, it can increase the temperature of the lodge to 20 degrees above the outside temperature,” Royar said. “There’s also some speculation that muskrat houses are hotter in the summer, so they shift to burrows.”

They eat a variety of emergent vegetation, from cattails to lily pads, consuming all parts of a plant, from roots dug out of the muck to stalks and leaves to flowers. When their habitat borders farmland, muskrats have been known to strip corn, to many a farmer’s chagrin. They’ll also munch on algae, clams, small fish, and crayfish.

Because predation is a constant threat to muskrats, they tend to carry their food to a sheltered place to eat it. In winter, the dining room may be a “push up,” a hole in the ice with vegetation pushed up through it. In warmer months, muskrats often craft rafts of vegetation on the water and pause there to eat.

Because they consume vegetation in and near the water, Royar said, muskrats can improve water habitat for a variety of waterfowl by changing the water-to-vegetation ratio. Some geese will nest atop muskrat houses, and snakes and turtles will also take up residence there.