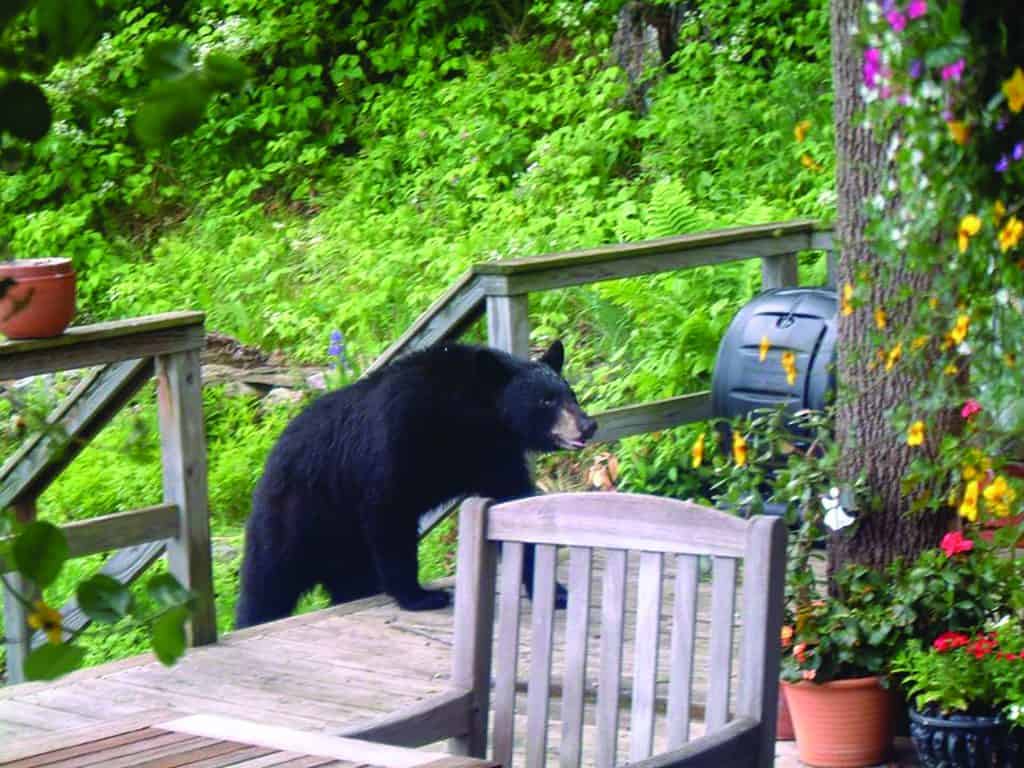 State urges residents to compost with bears in mind

Many people are having problems with bears looking for food near their homes, according to the Vermont Fish & Wildlife Dept. With the new food scrap ban now in effect the department is providing tips for people who are composting at home so they can avoid attracting hungry bears.

“We have been receiving lots of reports of bears on decks, tearing down bird feeders, wrecking beehives, killing chickens, and getting into trash, compost and garbage containers,” said bear biologist Forrest Hammond on July 2. “Some folks will be new at composting food waste at home, so we are offering some guidance on how to do that without providing additional attractants for the bears.”

“First though, to deter bears, bird feeders need to be taken away until we have a foot or more of snow in December. Then, make sure anything else that might smell like food is picked up. And keep your trash container secured inside a sturdy building and don’t put it outside until the morning of pickup. Beehives, chicken coops and compost bins can be protected with electric fencing.”

Vermont Game Warden Abigail Serra, who covers Rutland County, said calls have increased significantly this spring and early summer. “I would say more than double the normal amount, and a lot more right in [Rutland] city.”

Factors including drought-like conditions and a bear cub boom (as a result of the plentiful food supply last summer) have contributed to more bears venturing out of the woods and into residential area to find food.

That, combined with the food scrap ban and more folks being home as the result of the pandemic, help explain increased bear sightings.

“We try to educate the pubic, “Serra said, “but you’d be surprised how many people don’t understand that they have to take in their garbage.”

The best way to avoid attracting bears is to take food scraps to one of the drop-off stations. You can locate them by contacting your local solid waste management district or town at 802recycles.com or, ask your trash hauler if they pick up food scraps for composting.

Composting at home while minimizing the chances of attracting bears can best be done, too. Follow these easy tips:

Use three parts of brown material for one part of green material.  Browns can be dried leaf and yard debris, wood chips, or shredded paper.  Greens include kitchen scraps, vegetables and small amounts of fruits.  Adding lots of brown material minimizes smells and speeds up composting.

Never put meat or bones in compost.  Those do not break down quickly and are strong wildlife attractants.The new food scrap ban does allow people who compost at home to dispose of meat and bones in the trash, even after July 1. Keep them in a freezer until trash day.

Compost in a hard, durable container with a lid that will be challenging for a bear to open.  Some types of tumblers are bear-proof.

Electric fencing, with food scent added to the wires, around your compost will discourage even persistent bears.

If you are currently having a bear issue, delay starting your new compost pile until the bear issue resolves.  Until then, keep food scraps in the freezer or bring them to a collection site.

The public is encouraged to contact their local warden if they are having a bear issue. Local wardens can be looked up at: anr.vermont.gov.

Once a bear finds a food source, it will keep coming back. So it’s imperative that homeowners do their part from the start and don’t create a “nuisance bear.”

“Once they get that food reward and nothing bad happens to them, they start branching out into garbage, dog food… they lose their fear of people more,” Hammod said. “They aren’t there because of us, they’re there because of food, and the more times they do that without consequences, they’ll keep at it.”

Hammond says if residents see a bear on their property, they should yell or bang pots and pans or clap “tone of voice is everything. Use it to scare them off.”

Lee Kahrs contributed to this report.