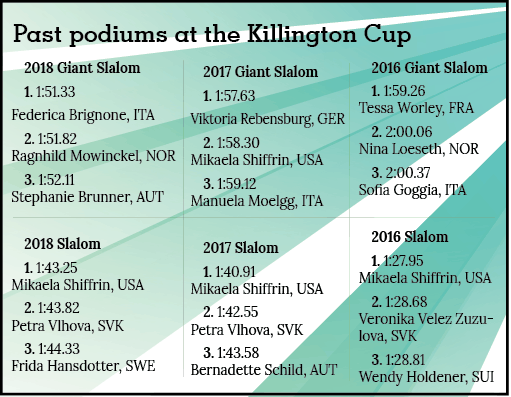 The 2018 Killington Cup drew an estimated 39,000 people to the area over Thanksgiving weekend, breaking an attendance record since the World Cup debuted at Killington Resort in 2016.

“I could hear the crowd the whole second run, from the start to the finish,” Shriffin said after her run last year. “The crowd really carried me down the hill, and it’s just amazing to race here in front of everybody. The atmosphere is incredible.”

The day before her win in Slalom, Shiffrin was just edged off the podium in Giant Slalom when she took fourth place. Federica Brignone of Italy earned first, followed by Ragnhild Mowinckel of Norway and Stephanie Brunner of Austria.

Killington has already announced that the World Cup will return to the resort in 2020.

“Showcasing Killington and the state of Vermont to the international ski community for a third year in a row, has us and the entire surrounding community bursting with pride,” said Mike Solimano, president and general manager of Killington Resort and Pico Mountain. “Everyone involved, from volunteers to groomers, put on another great showing for athletes and spectators. We’re very much looking forward to keeping this event on the East Coast next year.”