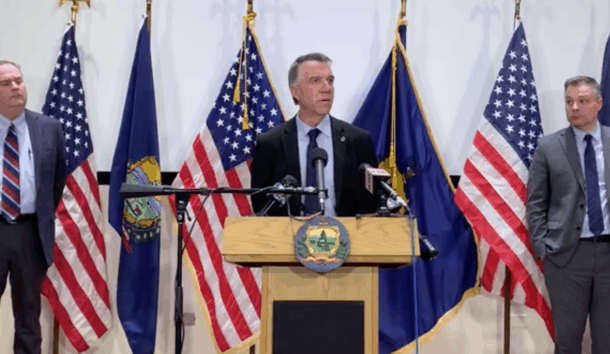 Gov. Phil Scott said on Wednesday that he has enlisted the help of senior aides in previous administrations to help lead the state’s response to the coronavirus pandemic.

Liz Miller, who was chief of staff to former Gov. Peter Shumlin, a Democrat, and Neale Lunderville, who was secretary of administration for former Gov. Jim Douglas, a Republican, will initially support the Agency of Education’s transition for schools in the coming weeks, Scott said.

He added the two “have a wealth of experience in state government and the private sector and have already hit the ground running.”

Scott and other administration officials delivered their latest update on the state’s coronavirus response during a press conference Wednesday streamed on Facebook, in which officials stood at a distance from each other and most reporters called in over the phone.

The health department is no longer publishing details about each case — such as where the person lives or where they are being treated.

Levine said “We have testing capacity now to do all of the testing that we’ve currently been asked to do in terms of physicians coming to the clinical judgment that their patients should have testing.”

However, Levine said the state remained limited in its ability to do “expansive health surveillance,” such as testing people who are not symptomatic, such as what has been done in South Korea.

“It could overwhelm the system, if everybody felt that their testing was the most important and that they needed to have it done immediately. Because we’re certainly not in a situation where we can do that today,” Levine said.

“But I think as a country, you’re going to find in the next week or two, we are all going to catch up rather rapidly,” he added.

Evolving plan for child care
Scott in the past day has laid out a vision for schools during the coronavirus outbreak, in which they are both hubs for remote learning and day care centers for parents working on the front lines of the fight against COVID-19.

Education Secretary Dan French said “labor concerns” had already emerged over the plan. He said that a number of educators and school support staff would be exempted from the order to remain at work.

Schools will become physical day care centers only for children 6 and over, with no more than 10 children in a classroom at one time. The Vermont-NEA had previously expressed concern about exposing its members to unsafe situations under the administration’s plan.

Agency of Human Services Secretary Mike Smith said the state has already been in touch with more than 40 existing child care centers to care for children 5-years-old and younger with parents serving “essential” jobs.

Who is essential?
Public Safety Commissioner Michael Schirling said his department has a “work order” to identify all employees who should be considered essential for the purposes of providing services like child care.

Schirling said that grocery store workers, as well as others involved in the food supply chain, are considered essential people, adding that this list of professions would be updated in the day ahead.

Last week, the Vermont House passed legislation to change the state’s sick leave law to protect both businesses and employees who are forced to take time off because of the virus.

The changes would ensure that employees who are forced to take COVID-19 related leave are eligible for benefits, but would also give businesses relief for some of the cost related to paid leave. This would take effect July 1, 2020.

In his emergency declaration Friday, the governor directed the Department of Labor to extend unemployment insurance to Vermonters who are directed by health providers to self–isolate. He also asked the department to eliminate the work search requirement for workers affected by a temporary business closing.

The Scott administration is also waiting on a federal bill that establishes paid emergency leave — including both 14 days of paid sick leave and up to three months of paid family and medical leave and tweaks to federal unemployment insurance that would extend benefits to furloughed workers as well as suspend the employment requirement to be eligible for Supplemental Nutrition Assistance Program.