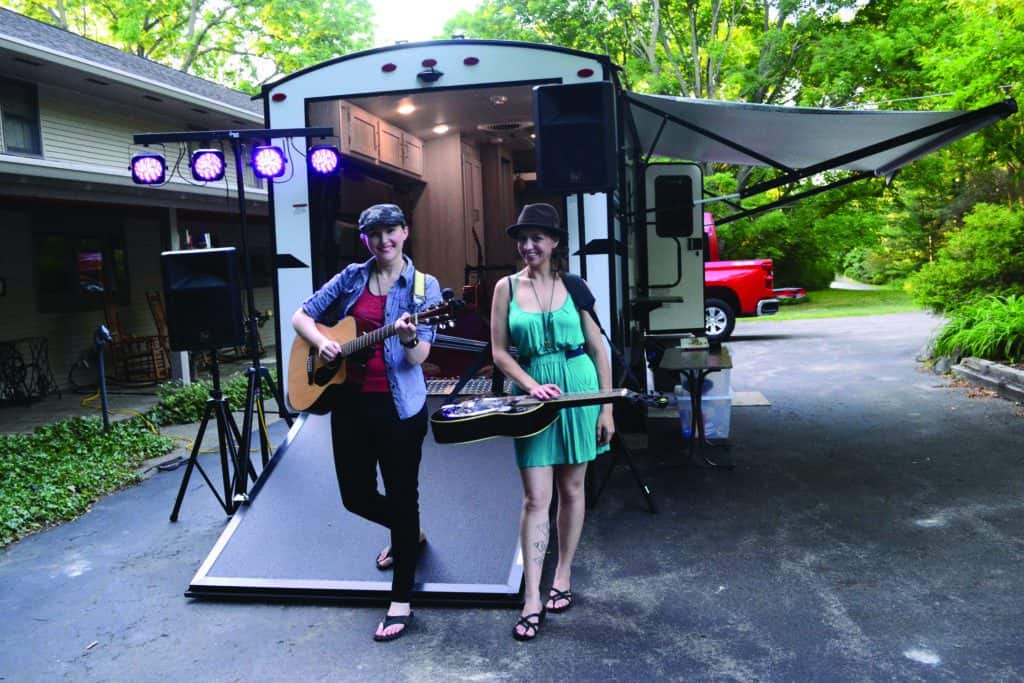 Rachel Coats and Lucciana Costa, also known as King Margo, made their mark on the Killington music scene this past winter. The duo, originally from the Midwest, migrated north from Nashville, caught the snowboarding bug, and decided to make Killington home. It wasn’t long before they were playing at venues such as Jax, Liquid Art and more, quickly amassing a following with their “sarcastic folk rock.”

When the pandemic struck in March though, they, along with all the other musicians in town were quickly sidelined. Not willing to go completely silent, the duo took to Facebook Live every Friday night.

“How much we came to love doing a weekly livestream on Facebook was the biggest surprise of all!” Costa said. “The first few weeks were somewhat stressful, figuring out how to make it sound and look decent, and getting used to performing without microphones. Also interacting with comments and staying focused and not accidentally drifting out of camera frame…it was a lot! But as the weeks passed, it really hammered home how insanely loyal our people are. Every week! For three months! We’d see the same people return and get texts with pictures from all the places people were watching from and hear how much they looked forward to Friday nights. It seriously kept our spirits up in some dark times.”

While the virtual shows help them share their music and passion, the pandemic pause gave them a chance to make another idea come to life. King Margo bought an RV, equipped it with everything they’d need, and hit the road.

“Covid definitely took the idea from ‘oh, wouldn’t that be fun’ to ‘this may be the only way we can play live shows now.’ We had tossed around the idea before, and had spent many nights on a futon mattress in the back of a Chevy Express in the past few years. But we realized that touring now would require us to have our own self-contained unit, including a bathroom, shower and air conditioning. Plus, it makes putting on shows much more realistic, where people can be in their own space in a neighborhood or campground and also have access to their own bathrooms…and booze,” Costa said.

The rolling performance venue is a GeoPro toy hauler that’s about 18 feet long.

“If you’re unfamiliar with RV world, a toy hauler has a big door in the back of the rig that opens up into a ramp so you can drive your scooters or motorcycles up or whatever. We were looking at trailers and never even considered a toy hauler until we saw the one that we ended up buying and realized it would be the perfect rolling stage,” Costa said. “We travel with our standard PA that we use for shows and collapsable stage lights…all we need to put on a show is power!”

Now, King Margo is blending their live and online performances on the road. A virtual tip jar helps make things possible. They said they can earn as much during a virtual performance as they previously did playing a show at a venue. “We’ve been so grateful for the empathy that people have had for those of us in the performing arts because we really did watch three months of detailed touring plans completely evaporate,” Costa said.

Coats and Costa also pay the bills by teaching online music lessons. They look forward to bringing out the real tip jar again though, and the RV is helping to make that a reality.

“Our first show was at a campground overlooking Lake Erie where we have friends who stay on the weekends. We weren’t exactly sure how the concept was going to play out, but our friends know everyone there and they very kindly asked the owners and the neighbors if they would be okay with us playing a little show. We had the most amazing response and turnout! Not only were they okay with it, but they gave us a great spot to set up and the entire campground showed up in their golf carts and lawn chairs. It was the most joyful night we’ve had since quarantine started. We’re only in Week 2 of owning the trailer, so we’re still figuring out all the places we want to go. Naturally though, Killington is our next destination! In fact, we’re answering these questions from I-90 on our way to Vermont.”

Plans are also coming together for a Western tour, and the only certainty is that the Friday night livestreams will definitely continue.

“We have a great network of friends and fans around the country, so the plan right now is to bring the show to people much in the way we book house concerts and private parties. But we’re also interested in working with businesses and venues that want to sponsor a drive-in style show. The possibilities are super exciting.”

Don’t miss King Margo, every Friday on Facebook Live and wherever their RV may go. You can keep up on all their travels at facebook.com/kingmargomusic.