Investments in both winter and summer attractions and activities at Killington Resort, expansion of Killington Mountain School programs, the transition to a year-round vacation paradise, the good value of real estate prices, and the “gig” economy of short-term rentals have all contributed to a hot real estate market in the Killington area.

Real estate brokers note being the busiest they have been seeing appreciation of prices as the market transitioned out of being a buyer’s market.

According to information provided by Prestige Real Estate — data based on sales and listings in Killington only— “Killington market revenue year-to-date is more than 75 percent higher than it was through the first three quarters of 2018.” 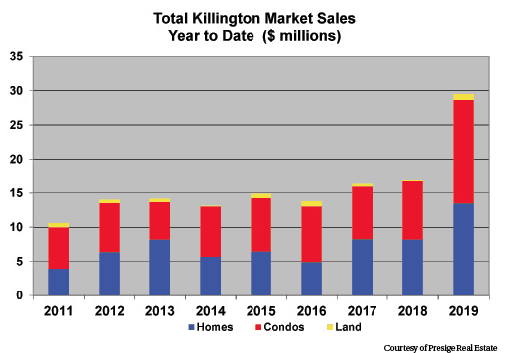 Brokers busier than ever

“In my 16-year career, this is by far the busiest I have ever been, and it is completely a sellers market. Over the past two years the real estate market has transitioned from a buyer’s market to the sellers’ market we are currently in,” commented Bret Williamson, owner/broker of Killington Valley Real Estate.

Williamson said 60% of his sales have been condos, noting they are at the lowest inventory levels he’s seen. “As of today there are currently 24 full ownership condos on the market where as a year-and-a-half to two years ago you would have had 100,” he said.

“There is a need for more inventory for condos and single family homes. I am seeing an increase in land sales and listings as well, which makes sense as land was very slow in past years. As the market has gained momentum, land listings are popping back up and starting to sell,” he added.

As for prices, Williamson said he has had “listings and sales ranging from the mid-$100,000s to over a million,” adding he has seen “a fair amount of requests to view homes over the $1 million mark and that caliber house has a fair amount of listings currently.”

Williamson also reported that Killington Valley’s traditionally strong winter seasonal rental market has continued. “Recently the summer rentals market has grown so listing properties for summer has been a market that is growing, too,” he added.

Ski Country broker Tricia Carter said, “People are coming out of the woodwork.” Sellers are asking for the values on their properties while buyers are looking for properties with cash flows, etcetera. “I almost feel like it is back in the 1980s when there was new construction going on and real estate activity was booming,” she commented.

Kyle Kershner, broker/owner of Killington Pico Realty echoed Carter’s observation, noting, “We’ve been straight out. It’s actually slowed down a little since Columbus Day, but from July to October was just unbelievable.”

He observed that sales in Killington and nearby towns have been increasing year-over-year for several years, but better demand hadn’t turned into appreciation in the past, adding the 2008 economic downturn had resulted in a 35 percent depreciation in property prices.

“The median sales prices remained flat until 2017 which was the first time we saw a jump. Since that time, we’ve seen two years of double digit appreciation,” Kershner noted, adding that the medium price of condos is up 16 percent (as of Nov. 21) over last year. Appreciation extends to units at the Killington Grand Hotel, which he said is reported to be the second highest traffic [occupancy] hotel in the state of Vermont.

He also said buyers are not looking for fixer uppers but rather updated and upgraded properties that are ready to move into.

“We’ve transitioned from a seller’s market to a more balanced market and we’re seeing multiple offers on the best properties,” he added.

Observing that a rising tide lifts all boats, Kershner said there have been good sales in surrounding towns. “One house in Pittsfield saw seven offers in 72 hours,” with the bidding problem resolved with a deadline.

Williamson said he feels it’s “not one thing in particular that is responsible but a lot of different factors that have all helped propel the market to where it is now.”

“I look at the market from different perspectives, as a parent of two small children, as a business owner, and as an active participant in the community involved in various clubs, sports, and board of directors.  Things from the Killington Elementary School being ranked as one of the best in the state of Vermont to Killington Mountain School expanding programs offered to their athletes have both been reasons that certain sales have closed for me in Killington.

“Killington Resort has been a driving force in the development of the mountain biking and adventure center which has also brought a lot of attention to Killington for the summer months. The [town’s] recreation department also has fantastic camps for kids that are well run and a great, value which is another positive for the area. I remember taking notice a couple years ago that the market was heating up and when Killington announced that a $20 million investment was happening, it was off to the races,” Williamson opined.

Bomengen cited similar reasons for the hot market, adding that she thinks: “people are feeling financially secure” and “Killington properties represent a very good value compared to other ski area real estate, particularly in comparison to Stowe, Okemo, and Stratton with whom we compete.”

She also observed there is “a greater appreciation for what mountain operations can do based on pulling a World Cup event off during Thanksgiving weekend multiple years in a row and that people recognize the investment that Powdr has made, and is continuing to make, in the mountain in the form of new lifts, new trail flow, and new lodges.”

Kershner agreed with the foregoing “host of positive trends,” adding that the addition of the year-round season pass and Killington Resort’s commitment to year-round activities have had a very positive effect. While some ski areas have seen a slowing market, Kershner said he thinks the local market is “outperforming,” based on discussions with brokers from other resorts.

Noting that the prior busy vacation property market of 2003 to 2007 was driven in part by the national “flipping craze” (in turn driven by TV shows) of purchasing fixer uppers, making changes, and selling for a profit, Kershner said he thinks the current change to a hot market in Killington is “driven by the short-term rentals trend.”

Clients interested in purchasing ask about a property’s ability to being used for short-term rentals, he reported, noting many want to use their vacation property but also have rentals to help with expenses. Observing that “more regulation is coming,” he said savvy buyers want to know that a property could qualify for rentals. They want to know that the fire marshal would qualify the property for short-term vacation rental use (or had already inspected it and approved it).

He also sees buyers who invest in multiple condos which can be used for rentals. He attributed that to the affordable prices, a return on investment, and the ability for vacation properties to benefit from the Airbnb, VRBO, and HomeAway rentals trend.

Kershner buttressed his observation, noting that a recent VACASA study — naming the Top 25 markets for buying a vacation rental — lists Killington as number two in the nation. That study (vacasa.com/top-markets/2019-best-places-to-buy-a-vacation-home) uses a medium sales price of $208,828 and Cap rate of 9.3%(a return on investment) as factors that make Killington so attractive for investors.

VACASA is the largest vacation rental management firm in the U.S. The only other ski resort towns on the list are Big Sky, Montana, at number 10 ($585,000; 5.4 percent cap), Warren, Vermont, near Sugarbush and Mad River at number 14 ($262,003; 5.3 percent cap) and Rhododendron in Oregon’s Cascade Mountains (close to five ski resorts) listed at 20. The majority of recommended vacation rentals locations are beach or retirement oriented resorts/towns.

He said of the out-of-state clients he sees, about 80 percent are looking for vacation property and the ability to use them for rentals as well as personal ski vacations.

There are investment buyers among them, he said, noting seeing people who own beach as well as mountain vacation properties.

About 20% of the out-of-staters he works with are looking for primary homes in Killington for a lifestyle change, Mastroeni said. The reputations of the elementary school and ski resort are draws for families with kids, he explained, noting one family moved to the town to foster their youngster’s moguls dreams of making the Olympics.

He agreed that Killington is an “affordable resort,” explaining that condos constitute 70 to 75% of sales, which keeps the median price down.

But Mastroeni also echoed observations on more interest in luxury properties, noting a listing for $3.1 million. “In Stowe that would be listed for $10 million,” he added, concurring with others that there are still good values to be had.

“The sale cycle used to be predictable,” Williamson observed. “As the ski season started things would slow because people had already identified properties and closed or rented. Then the search was put on hold until spring. That model is no longer. Last year I had closings every month, and now it seems that people don’t want to miss out,” he said.

Kershner concurred, saying the traditional slow times — of people looking between Thanksgiving and New Years and during mud season — was “a thing of the past.”

There does not seem to be any sign of the market slowing with 31 additional sales in Killington since Oct. 7 according to Prestige data for the town, which noted the total number of properties on the market in Killington was just 78, the lowest inventory since 2001.