UPDATE Wednesday May 19 at 4:40 p.m. — The Killington forest fire has started up again and appears to be burning more toward the west along the hillside north of Route 4 west of Goodro Lumber. Selectman Jim Haff who called the fire in to Fire Chief Gary Roth Wednesday afternoon, said it “looks like it’s behind grange hall.” Fire Warden Tom Rock responded first to assess the scene. At approximately 5:50 p.m. crews from at least nine fire and rescue departments had been called out, according to Police Chief Whit Montgomery who was on the scene. Responding departments include: Killington, Bridgewater, Rutland Town, West Rutland, Pittsfield, Proctor, Barnard, Bethel Clarendon.

Saturday afternoon, May 15, police and fire personnel were alerted to a forest fire off Route 4 in Killington. Smoke could be seen rising up the southern hillside behind the (former) Kokopelli Inn, just west of Goodro lumber.

A local resident who lives nearby was the first to call in the fire, according to Killington Fire Warden Tom Rock who took the call. Multiple other callers also subsequently reported the fire, he said.

The fire was started by new landowners who were burning brush and “slash” left over by previous logging on the land, according to Rock. They did not have a permit to burn as required by town ordinance.

About 85 people responded to the fire from 10 local departments. Crews came from Killington, Pittsfield, Bridgewater, Stockbridge, Rutland Town, Rutland City, Proctor, Bethel, Barnard, Clarendon and the state to battle the forest fire, according Rock and Chief of Police Whit Montgomery.

“We put down crude fire lines Saturday in an effort to slow down the spread of the fire,” Rock said. “The fire actually jumped some lines that first night, so we had to reset those boundaries with new fire lines and continue to hit the hot spots… With big fires like this that go on for days, we work until dark but not into the dark as it’s unsafe,” he said.

Creating a fire line requires clearing debris and leaf litter to get down to the soil where “there’s nothing to burn, nothing to transfer fire,” Rock explained. “There’s a lot of raking and shoveling involved to create a dirt path… up there they ranged from a couple of feet to 10 feet wide,” he said.

“Elevational burns usually travel fast and are more dangerous. You have to set fire lines way ahead and predetermine how much time you have to cut,” he explained. While it’s most common for fires to move uphill fast and downhill slower, wind speed and direction among multiple other factors can change a fire’s trajectory very quickly, he added.

No buildings were ever in jeopardy as a result of the Killington fire.

Accessing the fire on the mountainside was challenging. A small river blocked access to a logging road that led up to the fires. Trucks couldn’t cross, so crews used ATVs to carry water, hoses, people and supplies over the river and up the mountain.

“We had several thousand feet of hose up there,” Rock said.

By Sunday evening the blaze was considered under control, though Rock said they were continuing to monitor some hot spots into Tuesday.

“It’s hard to tell but we think the blazes all stayed within the landowner’s property,” said Rock. He estimates that the total burn was 25-26 acres.

This forest fire was different than the last experienced in Killington on Deer Leap on Sept. 18, 2020. “It’s different terrain, different trees, different undergrowth, different seasons,” said Rock. “But both were mountain fires on steep terrain and difficult to access… It takes an average person 45 minutes to hike Deer Leap, just say. So these guys are doing that with lots of heavy gear then working 8-10 hour shifts,” he said. “For this fire, 85 people showed up and say they worked 10 hours each, that’s 850 hours in one day. That’s about the equivalent of one person working half of a year!” he said.

“We are extremely grateful for mutual aid,” Rock continued. “There is no way a single department could do it alone, there’s just too much labor involved. Communities come together to help each other out. It’s really a selfless act.”

Being a volunteer on a local fire and rescue crew is demanding. “And it’s not just the fires, there’s a lot of training hours involved,” Rock explained. “I have five kids. Whenever you sit down for Christmas, New Years, dinner, a birthday party… you may get a call. A lot of these guys had family plans Saturday but that day got converted. It’s a real selfless act — especially when you’re asked to help community you’re not part of. We just so appreciate the other towns responding.”

Rock has served on a fire department for 20 years and in Killington for the past 7-10, he said. This fire was the second biggest forest fire he’s responded to. The largest was when he served on the Whitehall, New York, department and someone burning garbage started a forest fire up a nearby mountain. “That one burned about 30 acres,” he said.

On the average, Vermont has 200-400 forest fires per year but the average size is only 11/2-2 acres burned. Nearly 50% of these fires are started by debris burning that is failed to be contained, according to northeastwildfire.org.

There is an ordinance in the town of Killington (and most Vermont towns) that requires anyone seeking to start an open fire to obtain a burn permit, Rock said.

Rock didn’t know if the new owners were aware of the ordinance or not, but said, “just because you didn’t see the speed limit sign doesn’t make it ok to go 80 mph. It’s still wrong.”

Obtaining a permit is “really simple, you just call one of the two wardens — Mark Fiori or myself — we usually answer or will get back to you the same day,” he said. “I actually prefer to give a permit as close to the burn time as possible to ensure conditions are still ok… we usually grant them, but this past weekend we had a couple of locals call to request them and we simply asked them to hold of a couple days… on Friday, the state’s assessment of risk was classified as ‘moderate,’ but by Monday it was changed to ‘high’ for our region,” he said.

The state provides wardens with data, but it’s up to them to make their own judgements based on local conditions and knowledge.

When one of the warden grants a burn permit they text the other warden and the fire chief to let them know, “then if someone calls it in, we’ll know it’s a controlled burn,” Rock explained. “Usually I’ll call and then stop by even if they say it’s ‘all good,’ just to be sure. But if it’s not permitted we always send the trucks… We try not to roll the truck if we don’t have to,” he said.

The spring is typically “fire season” as grasses and undergrowth from last season are dry, Rock explained. When the new growth and the forest canopy is fully leafed out it helps keep moisture in and conditions become safer to burn. In any season, “right after it rains is usually a great time to burn,” he added.

Despite having a burn permit, ultimately burning is the owner’s responsibility and liability, Rock added. “If you burn your house down, it’s still always on you,” he said, urging caution in all conditions.

In addition to the Killington forest fire, Pittsfield crews responded to a second fire, Sunday evening. It also allegedly was started from an unsupervised burn from new out-of-state owners. A Pittsfield resident called that fire in after she smelled fire while hiking her own property, according to Pittsfield resident Bob Giolito, the co-founder of Killington Search and Rescue. Giolito and the fire crew were able to contain that blaze Sunday as it was easily accessible.

Another local fire was reported near the Chittenden Dam, Rock said. “It was on state land and so the state wardens responded first and I think had to access it by boat.” 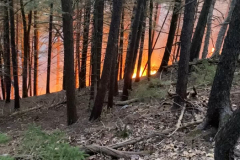 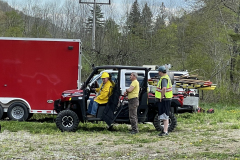 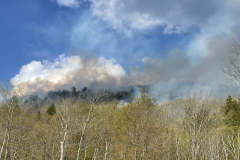 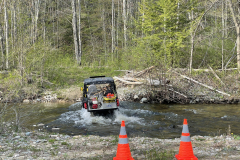 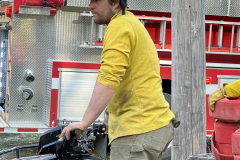 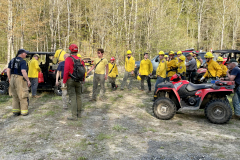 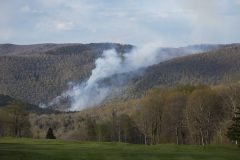 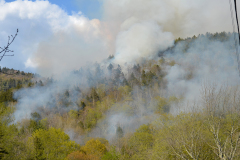