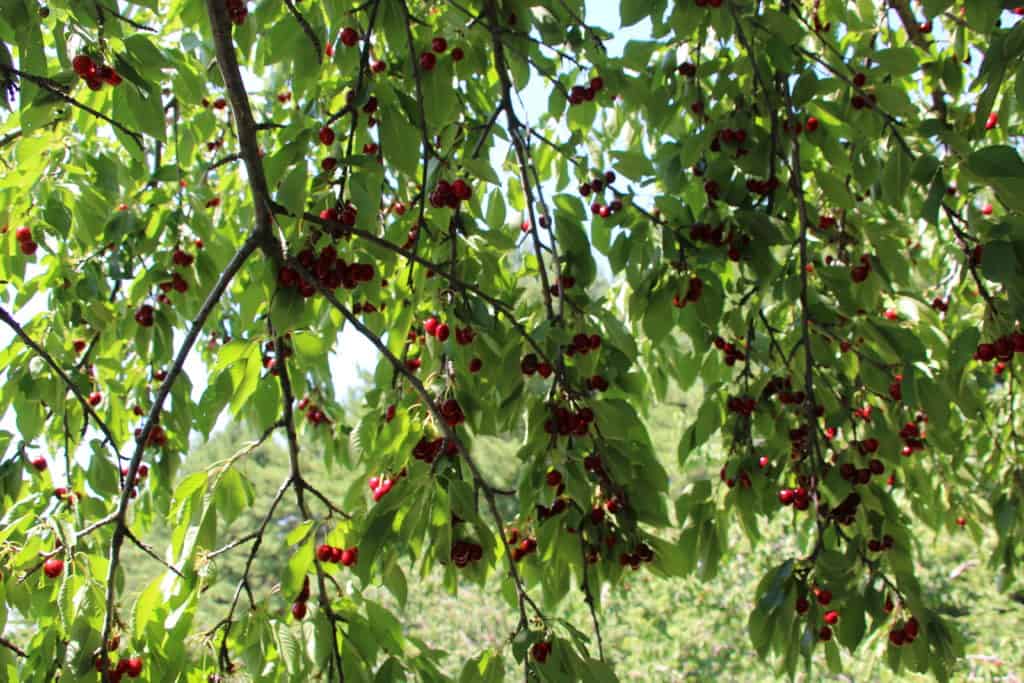 Two very interesting tree questions emerged in July and a visit to an orchard further created enough work to keep one busy with trees. Locally monitoring what appeared to be a much shorter white pine needle blight season kept June and July much greener as well. The drier spring resulted in less humidity and a shorter period of browning/yellowing on white pine needles in our area.

Good trouble if you like your pine trees green or if you are a white pine.

The Shrewsbury Hazard Mitigation Committee contacted the tree warden to see if hemlock wooly adelgid and its effect on eastern hemlock trees posed a threat to the roads of Shrewsbury.   “No” is the answer because hemlock is not nearly as prominent along our roads (road salt intolerant and very shallow rooted thus making them drought prone) as white ash. A few large ones are growing along the Upper Cold River Road,  Town Hill Road, and Spring Lake Road but the remainder of the town roads remain largely hemlock free.

The more basic question is whether or not the adelgid will reach Shrewsbury. So far the largest Vermont impacts have been restricted to the Connecticut River Valley and prevented from expanding due to egg mass vulnerability to cold winter temperatures.  Shrewsbury-cold if you will.  Good trouble if you are a hemlock in a cold region.

A very nice lady living on Route 103 called me very concerned about what was killing her America elms. She has several small dead and dying ones in her yard and one very nice large one that appeared perfectly healthy. Dutch Elm disease (DED) has never really gone away. It is a fungal disease that is transmitted by two native elm bark beetles and/or by root grafts from adjacent trees and it is fatal. This time of year its presence shows up via branches turning yellow, and then brown, and then ground bound. It is a wilt disease and kills the tree by preventing water movement in the tree. A large still healthy elm in Vermont is lucky, very isolated, or has some natural immunity. Due to the large number of small elms still growing, DED has been able to remain as a viable killing agent to the remaining American elms large or small. However, for years, there has existed a fungicide (Propizol) that can be injected into valuable elms that keeps DED at bay. It must be done before infection or in the very early stages and mid-to late summer is the perfect time to do it. The “lucky” and “natural immunity” theories have proved largely ineffective so if you have a large elm around worth keeping it can be kept alive. Good trouble if you are an elm owner or and elm tree.

A third tree related call to our house announced the beginning of cherry picking season in Vermont. Lake Champlain Orchards in Shoreham has multiple varieties of cherry trees (can you say sweet or sour) and like apples and other fruits they were ready for “pick your own.” What a hoot! Entire families in early July came to gather the harvest and spend a day part helping themselves to a bumper crop. Good trouble if you are only 5 feet tall or a cherry tree 20 feet tall ready to be “picked.” As the late Congressman John Lewis pointed out embrace “good trouble.”   Also embrace trees in our lives while I go and get a piece of pie.