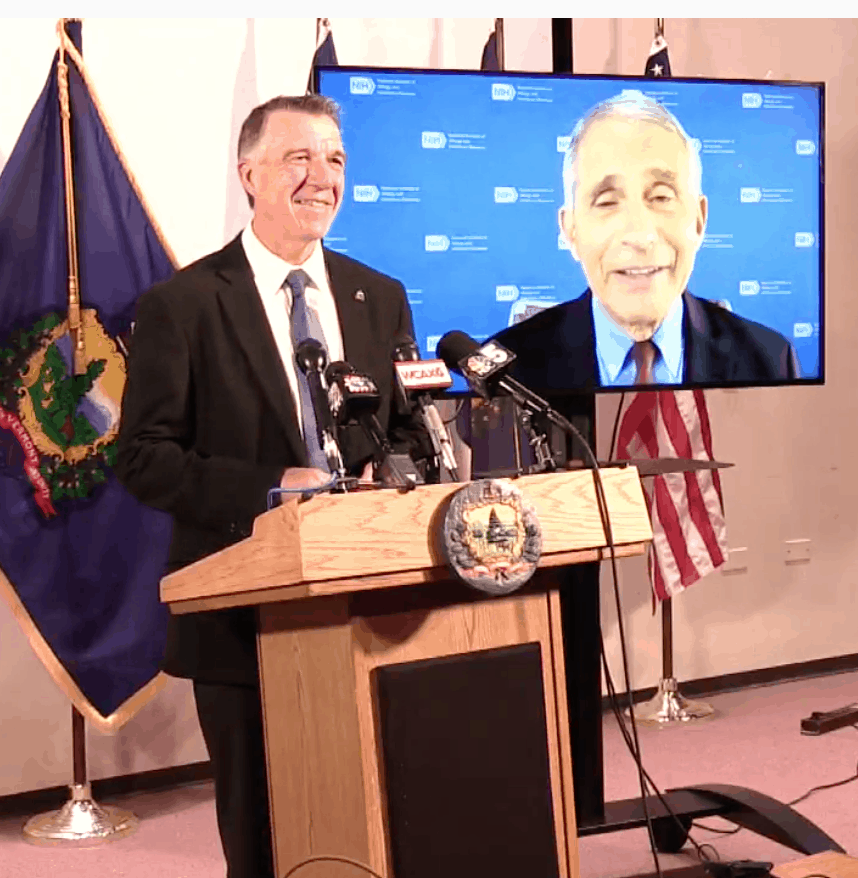 “I’m a big fan,” said Scott of Fauci’s role guiding the nation through the coronavirus pandemic. “He tells it like it is. And in a way that most of us can understand. Much like Dr. Levine. For most, he probably needs no introduction, but I’ll give one anyway. Dr. Fauci is the director of the National Institute of Allergy and Infectious Diseases where he’s led our understanding of HIV, AIDS, Ebola, and Zika. He’s advised six presidents on these global public health issues. He sits on the White House coronavirus task force. I’m sure many of you have seen Dr. Fauci sharing his wisdom on many national programs… I’ve really appreciated his leadership and expertise during these difficult times.

“Dr. Fauci, if you were here in person we’d typically try and sweeten you up with our world class maple syrup or maybe even a maple creemee,” Scott added, before Fauci addressed Vermonters via video.

During his comments, Dr. Fauci focused on two main messages to Vermonters: great work so far, and don’t let up.

Vermont is a model for “how we can reopen our economy, get our children back to school and people back to work in a safe, measured and prudent way,” Fauci said, adding that “there are certain parameters that make that easy…

“As I was sitting here listening to the numbers (you cited), I was wondering if somehow I could bottle that and take it with me when I go around and talk to rest of the country… One of the things that I’ve been emphasizing now for

several weeks is that the success of being able to prudently open is the baseline from which you start,” Fauci continued. “When you have a test positivity of 0.2% you are starting the game on your side.”

Fauci admitted, however, that moving into the fall and winter seasons will offer an additional challenge as more activity will move indoors. Remaining vigilant will be of “utmost importance,” he said.

“Even when you are in as good shape as Vermont is, you got into good shape by the certain things that you’ve done. Don’t get careless! And I don’t expect that you will because there’s no indication of that. But be prudent and careful in your interactions in the community… More people will be coming into Vermont from states and regions that have a higher degree of test positivity,” he explained, adding an optimistic note. “I don’t think you inevitably are going to have a second wave… if you do the kind of prudent public health measures that you’ve been doing… Let’s everybody keep our guard up and not be complacent.”

When asked if Vermont’s success is a result of its low population and density, Fauci said, “No.”

“These public health principles don’t really change. Regardless of your size, they remain true,” he said. “Whether you are in Vermont or New York City downtown, [health protocols] work. They work in states with small numbers like Vermont, and in states with large numbers like New York and Texas and California… It’s not a question of density or not, it’s a question of what you did or did not do correctly, and from what I’ve seen Vermont has done it correctly.”

“At the same time that I’m giving kudos to Vermont for doing so well,” Fauci continued, “this virus is a formidable foe. If you give it an opportunity to reemerge its ugly head, whether you’re in the beautiful rural area of Vermont or in the middle of Manhattan or the Bronx, that virus is going to take advantage of that. So please, you’ve done so well, please don’t let your guard down!”

Vermont Health Commissioner Mark Levine, himself an infectious disease expert, asked the final question to Fauci: Should Vermonters trust a vaccine that is ultimately approved by the federal government?

Fauci said “Yes” and explained the multiple independent and scientific approvals necessary before a Covid-19 vaccine would be made available. He said he was confident it will be safe and effective, adding, “I, for one, would not hesitate to take it.”

Fauci concluded his remarks by saying he’d love to take Gov. Scott up on his offer for a maple creemee, admitting that he’s “an avid ice cream fan.”

One comment on “Fauci says Vt. is the model for Covid response”