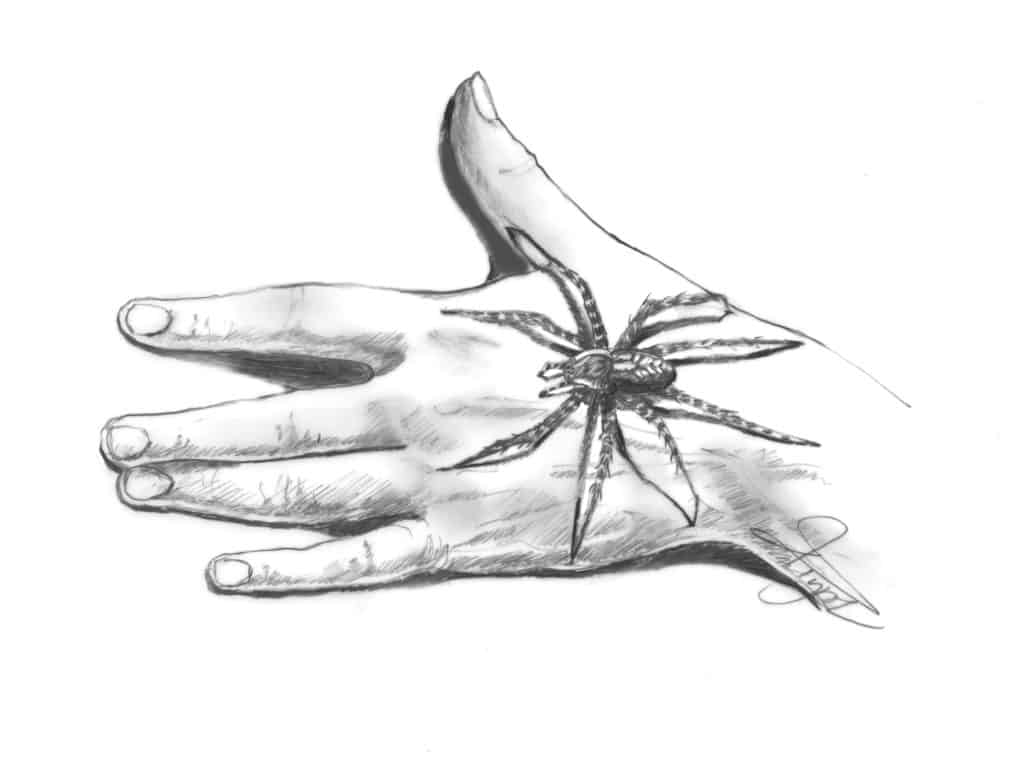 Large fishing spiders walking on water can be fascinating – or terrifyingly unnerving. The latter reaction is common among Saint Michael’s College students as we sample Vermont’s streams and ponds. On one occasion, a normally macho student screamed, dropped his net, and leaped from the stream to avoid a particularly large specimen. But have no fear; these beautiful beasts will not carry your offspring away. In fact, they are completely harmless – at least to humans.

Fishing spiders boast a leg span of up to 3 inches. Their rear legs cling to vegetation along pond and stream edges, while their front legs rest on the water’s surface, awaiting the tell-tale vibrations that signal a meal – or a mate – is nearby. On class trips, we regularly encounter the appropriately named dark fishing spider (Dolomedes tenebrosus) on streams, and the six-spotted fishing spider (D. triton) more commonly on ponds. A third species, the striped fishing spider (D. scriptus), is also common in eastern North America.

Although these spiders can subdue small fish, they rarely do, opting more often for smaller prey. Manfred Zimmermann and John Spence from the University of Alberta recorded 625 fishing spider meals that included not a single fish, and only one tadpole. Water striders topped the menu, followed by adult damselflies, then aquatic insects (including mosquito larvae) surfacing for air. Not much farther down the fishing spider menu was other fishing spiders.

Both male and female fishing spiders will consume their own kind, although females – with a leg span of three inches – are twice as big as males, so are more likely the diner than the meal. Males have many behaviors to communicate “suitor, not snack.” A male fishing spider seeks a female’s pheromone impregnated silk strands on the water surface. Once a suitable mate catches one of a male’s eight eyes, he proceeds slowly with a series of leg waves, drums the water with his pedipalps (a pair of appendages that flank spiders’ jaws) and makes larger jerking motions that ripple the surface.

Horst Bleckmann and Manfred Bender of Goethe University Frankfurt determined that male fishing spiders briefly produce vibrations of less than 50 beats per second. Conversely, insects fighting the deadly grip of surface tension produce faster vibrations for a longer period of time. These cues can spell the difference between life and death for amorous male spiders. Males sometimes miss other critical information, however: according to Zimmermann and Spence, males often approach already mated females uninterested in romance, and more interested in their next meal. In this case, the male spider may well become a snack, rather than a mate.

Few spiders scamper and sail on water – or dive beneath it – but fishing spiders are uniquely qualified for the task. Among 10 spider families examined in one study, fishing spiders were the hairiest, and their hairs more effectively repelled water than those of the other spiders tested. This permits unique travel options: they dive to avoid predators, swim actively under water, and can remain submerged for 30 minutes enrobed in a glistening shroud of air. Young spiders spin silk strands and “balloon”on the wind. In addition to rowing and running on water, fishing spiders raise their front legs and sail away, pushed along the water surface by summer breezes.

Although fishing spiders do not use webs for hunting, they use silk for other purposes. They spin drag lines to reduce their risk of being swept away by currents. Females make two distinct silks layers to protect their eggs: an inner layer consisting of large, loosely spun fibers and an outer layer of finer fibers densely woven to repel water. Female fishing spiders carry their egg sacs until the spiderlings hatch, at which time the mothers spin their first web. Like other members of their nursery-web spider family (Pisauridae), fishing spider mothers construct silken homes for their offspring and remain with them for some time. Nurseries are often built under structures we humans create near water, yielding a second common name: “dock spiders.”

So, if you find yourself slightly spooked by a large spider coming to rest on your kayak, or in a cool corner of your basement, as sometimes happens, take heart that you have met one of the best mothers of the invertebrate world.

If nothing else, this spectacular organism may well have consumed some mosquito, depriving it of the chance of consuming part of you!

Declan McCabe teaches biology at Saint Michael’s College. The illustration for this column was drawn by Adelaide Tyrol. The Outside Story is assigned and edited by Northern Woodlands magazine and sponsored by the Wellborn Ecology Fund of New Hampshire Charitable Foundation: nhcf.org.