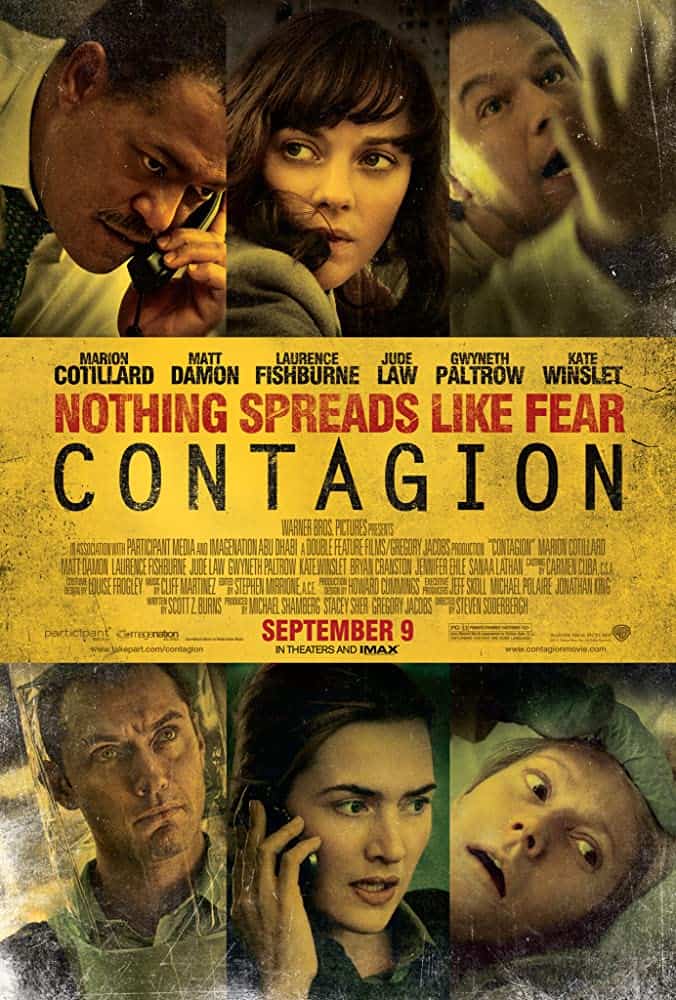 Nearly 10 years ago, in September of 2011, I wrote a review for the film “Contagion,” which is highlighted below. The film was an interesting composite of what might happen during a modern-day pandemic. I remember enjoying the film and also appreciating how realistic the plot seemed even though I believed the scenario to be highly unlikely.

Last week, I watched the film again (for obvious reasons). After it was over, I dug out my old review and read through it. I was struck by how forward thinking my germ concerns really were (I just wished I had purchased some of the stock I mentioned). Here’s an excerpt:

No one likes to get sick, but I really don’t like to get sick. In fact, I despise sickness so much that when I do come down with an illness, I spend most of my time ruminating on where I contracted it.

No sooner do I feel the tickle of a sore throat or the swelling of my nasal passages than I begin to backtrack in my mind. Did I pick up a stray virus when I shook hands with that guy at the basketball game? Did I inadvertently touch an infected keyboard when I visited the library? Wasn’t the woman at the check-out counter coughing when I was buying groceries?

I may come up with 15 or 20 possibilities before I finally narrow it down to a prime suspect. And then, when I’ve got someone in my crosshairs, I spend countless hours berating them in my mind for not practicing good social hygiene (and God forbid it’s a family member or close friend because then I actually hit them with the accusation).

My wife often ends up dealing with the brunt of this low-level dementia. Not only does she have to deal with a sick husband, but she also has to listen to my endless diatribes about who infected me and how the transfer of viral pathogens took place.

“Just accept that you’re sick and deal with it,” she usually berates me in frustration.

But I can’t seem to do it. I can’t seem to stop analyzing the scenarios. In my mind, I always feel that if I gain an immense backlog of knowledge, I can protect myself against future infections.

This problem came to the forefront several years when I contracted the mother of all “common” colds. I had it all: headache, dizziness, stomachache – you name the pain and I was experiencing it. Things got so bad at one point that I actually told my wife that I needed to go the emergency room (something I had never done).

While lying in my hospital bed, writhing in pain, I vowed to do whatever I had to in order to avoid this happening again. In other words, I was prepared to live inside a plastic bubble if it meant staying healthy and avoiding the pain associated with sickness.

This ordeal also happened to coincide with the birth of my son, which only compounded my phobias. Now, anyone who came within close proximity of my child also faced a verbal tongue lashing about sanitary practices.

I put hand sanitizer in every corner of my house, in my office, and in our cars. Hell, I would have bathed in the stuff if they sold it in vat quantities. And I’m not ashamed to admit that I even researched Purell on the internet with the intent of buying their stock if available.

I even went so far as to stop touching my face with my hands, opting instead to use my shoulder or stray knuckle. I literally came up with countless ways to open doors without ever touching the knobs or handles.

And then guess what happened? I got sick and so did my son. In fact, every time he picked up something, I usually had it within a few days.

But what really got me was that my wife never got sick. Here’s a woman that grabs every doorknob in sight and picks lettuce out of her teeth after dragging her hand down a public railing. We live in the same house, eat the same food, engage in the same extracurricular activities and she never acquires an illness. And I mean, never.

There was only one big difference in our lifestyles: she was a runner and I wasn’t. And while that didn’t seem like an Achilles heel to me, I was willing to give it a shot.

So, I started running. At first it was a mile or two and then it worked up into four or five. Before I knew it, I was running races and clocking my times and distances.

And wouldn’t you know it… I stopped getting sick. Seriously, I haven’t had anything other than a sniffle in years. Maybe it’s luck or maybe exhaustive exercise actually heightens your immune system. Whatever the case, I’m sticking with it in case the big pandemic ever arrives.

Of course, my worst fears were realized this past week when I went to review “Contagion,” the  film from Steven Soderbergh that imagines modern day society in the throes of a pandemic. “Contagion” hosts a slew of familiar faces including Gwyneth Paltrow, Matt Damon and Laurence Fishburne. The story is about  the determination of Patient Zero – the first individual infected with a highly contagious disease – and the subsequent outbreak that circles the globe.

Hollywood loves a good outbreak movie, having many successes over the years with films like “28 Days Later,” “The Happening,” “Quarantine,” and “The Andromeda Strain.”

“Contagion” is a viable addition to this genre in that its realistic approach lends itself to immense believability. There are no aliens or devious scientists, just nature working its way through the world with catastrophic results.

Check this one out if you’re in the mood to see the world go on a viral lockdown. You won’t walk out in awe, but you will have enjoyed questioning how you might react in a similar situation. An infectious “B” for “Contagion.”