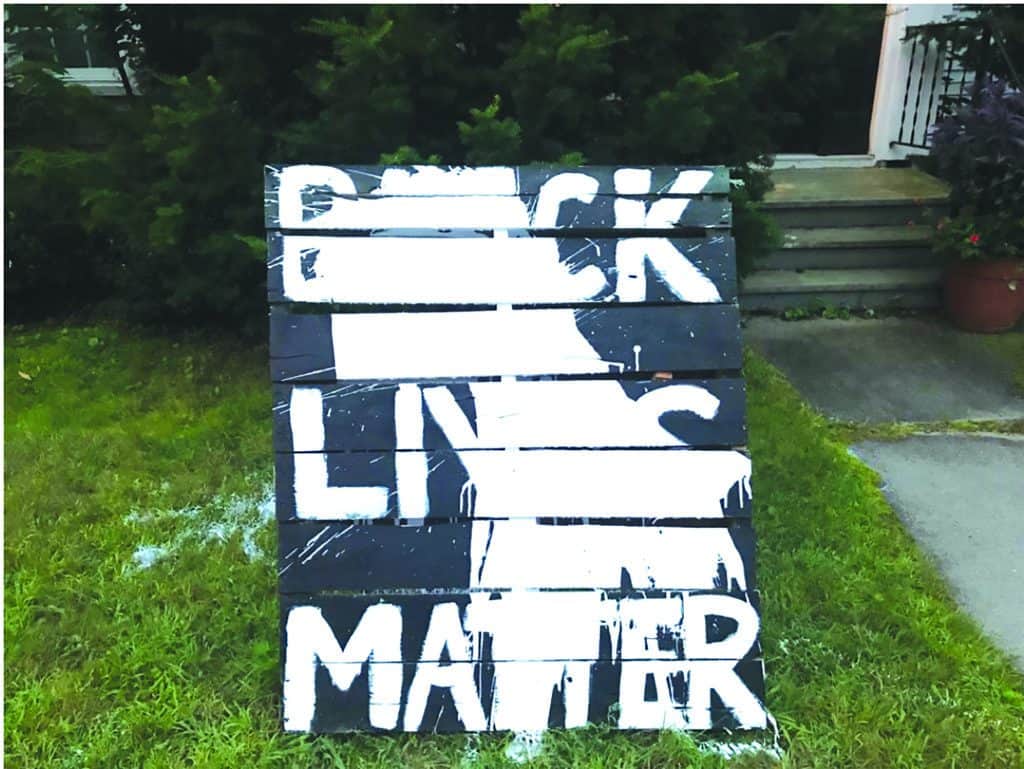 Several wooden pallet paintings, one with the Black Lives Matter slogan made by a racial justice advocate, placed on a Wallingford lawn were vandalized Wednesday evening, Aug. 26, according to the homeowner.

State Police are investigating the incident.

When the annual Wallingford Day — a celebration with music, vendors, and fireworks that was revived last year — was canceled this year due to Covid-19, Wallingford residents decided to engage in a community art project.

In July, the town distributed wooden pallets to residents, who could paint them however they pleased, then place them in their yards. The painted pallets will be donated and auctioned off to raise money for next year’s Wallingford Day.

Maria French placed four pallets in her yard, some painted by her family, and others by neighbors. One was a Black Lives Matter pallet on behalf of Tabitha Moore, Rutland Area NAACP president, who preferred not to put the pallet in her own front yard, fearing that it might expose her family to backlash — and that someone would be more likely to tamper with it.

“We put it in our white neighbor’s yard, and somebody still vandalized it,” Moore said.

French called police Thursday morning to report that someone had smeared white paint across the Black Lives Matter pallet and two others in her yard, including a rainbow swirl pallet and another that read “Hello Wallingford, have a wonderful day!”

State police responded with a K-9 unit, according
to French.

“They took samples of the paint in case there’s more vandalism in the future and they think there’d be reason to compare it to other paint, if someone did it again,” French said.

French posted photos of all the neighbors’ pallets to a Facebook page called “Wallingford Day” after they were painted. She said comments on social media were positive.

A member of the Mill River Unified Union School Board, French said tensions in the district have run high since the board voted to raise the Black Lives Matter flag and Pride flag at all district schools. Despite that, this is the first public act of dissent she’s seen.

“There hasn’t been anything, and I’ve been keeping an eye on it with the pallets, because I knew that my pallet, people would have strong feelings about,” she said. “It’s just really disappointing.”

An investigation by the state police is ongoing. Those with information can call the Rutland Barracks at 802-773-9101, or submit an anonymous tip online at vtips.us.