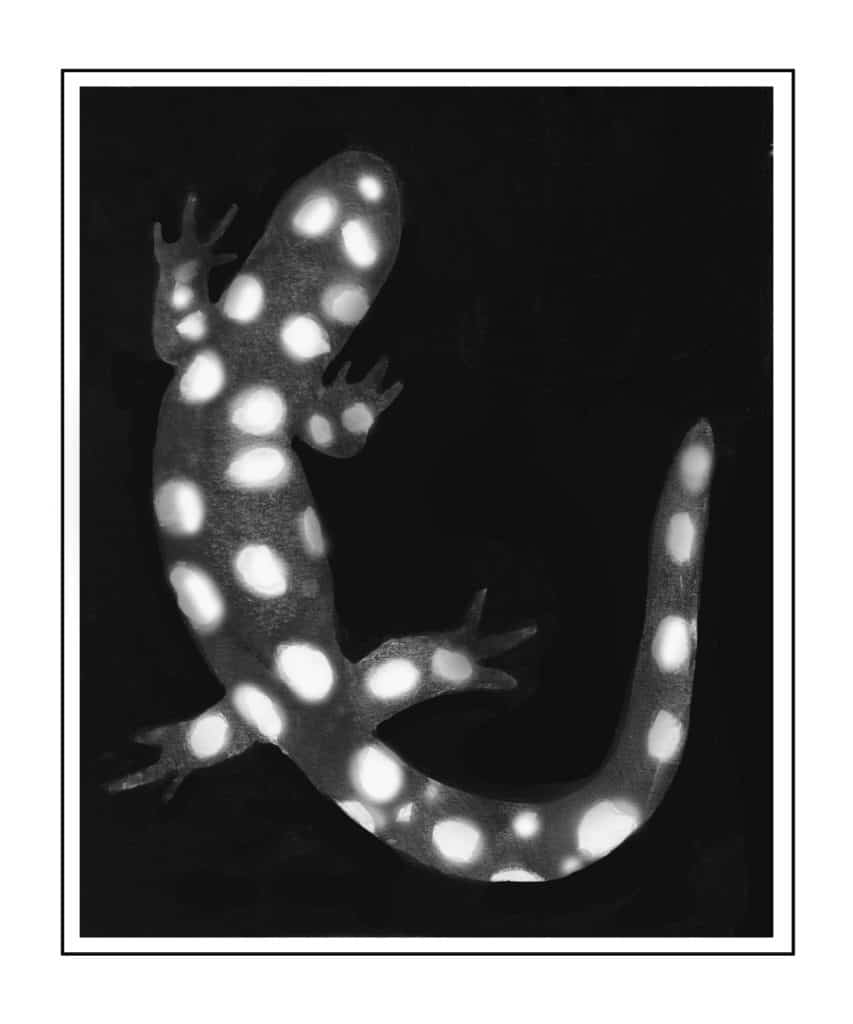 The living light of bioluminescent organisms like fireflies, anglerfish, and marine plankton is legendary. The dazzling light shows put on by synchronous fireflies in Great Smoky Mountains National Park are so popular that park managers have had to institute a lottery system for viewing them. An entire recreation industry has grown up around kayaking through glowing surf from Florida to Washington. And a few years ago, I even saw someone dressed as a deep-sea anglerfish at a Halloween concert – complete with glowstick lure dangling from her forehead.

Now, there’s a different glow making waves in the scientific community: biofluorescence. Where bioluminescence is produced by a chemical reaction and results in light that is immediately visible to the human eye, biofluorescence is the absorption of light by chemical compounds known as “fluorophores” at one wavelength (typically blue or ultraviolet) and re-emission at another (often blue, green, or red). The exact mechanisms behind biofluorescence vary by species and are not always known, but pigments containing fluorophores have been documented in snail slime, damselfly wings, and even penguin feathers. Many animals can see ultraviolet (UV) light, and therefore the biofluorescent glow. Humans, however, must use special tools – like blue lights and optical filters – to perceive it.

Although scientists documented UV fluorescence in plants as long ago as 1845, vertebrate fluorescence is a relatively novel field of research, with new discoveries happening all the time. In 2019, biologists learned that all three North American flying squirrel species glow bright pink in response to UV light. They hypothesized that fluorescence could be a form of camouflage; flying squirrels use the same habitat at the same time of night as barred, barn, and great horned owls – all of whom also fluoresce pink – so the glow may help squirrels be seen as fellow predators instead of prey.

In early 2020, Minnesota biologists Jennifer Lamb and Matthew Davis published the first comprehensive study of UV and blue light biofluorescence in amphibians. All 32 species they tested – including five frogs and four salamanders native to New England – fluoresced in some way, although glow intensity, color, and pattern varied widely.

It is perhaps unsurprising that the spotted salamander’s eponymous spots fluoresced brightly, as did other salamanders exhibiting bold patterns and hues. However, even amphibians without distinctive markings glowed, sometimes in unexpected ways. Take, for example, the marbled salamander, whose teeth and toe bones fluoresced under UV light like a neon green x-ray. Its cloaca – the opening through which both waste (urine) and reproductive material (spermatophores for males, eggs for females) passes – gleamed brightest of all.

This spring, eager to sneak my own peek into the secret psychedelic lives of my neighborhood amphibians, I bought a handheld UV light and headed out to a nearby pond on a rainy night. One of the first thunderstorms of the season had just swept through, and scores of amphibians were taking advantage of the wet ground and swampy air to make their way into and out of the water.

I shined my light on several species as they paused pond side, starting with an American toad. With the exception of small fluorescent specks radiating from the bony ridges atop its head, the toad was woefully devoid of glimmer. The bullfrog, spring peeper, and leopard frog, however, did not disappoint. When bathed in UV light, the eyes of all three species emerged from the darkness as gleaming blue-green orbs.

Why the glow? No one really knows, at least not yet, although the new study suggests some intriguing possibilities. In moving between aquatic and terrestrial ecosystems, amphibians experience complex light environments: light shining through water, for instance, or dappled by leaves on its way to the forest floor. Many amphibians are also active at night or twilight, when blue and UV light are more prevalent, and have eye structures that are particularly sensitive to blue light. It’s possible, then, that biofluorescence helps amphibians find one another in low- or changing-light environments, with cloacal fluorescence potentially playing a role in courtship.

It’s a whole new world, and we’re lucky just to bask in its mysterious glow.

Brett Amy Thelen is Science Director at the Harris Center for Conservation Education in Hancock, New Hampshire.The illustration for this column was drawn by Adelaide Tyrol. The Outside Story is assigned and edited by Northern Woodlands magazine and sponsored by the Wellborn Ecology Fund of New Hampshire Charitable Foundation: nhcf.org.